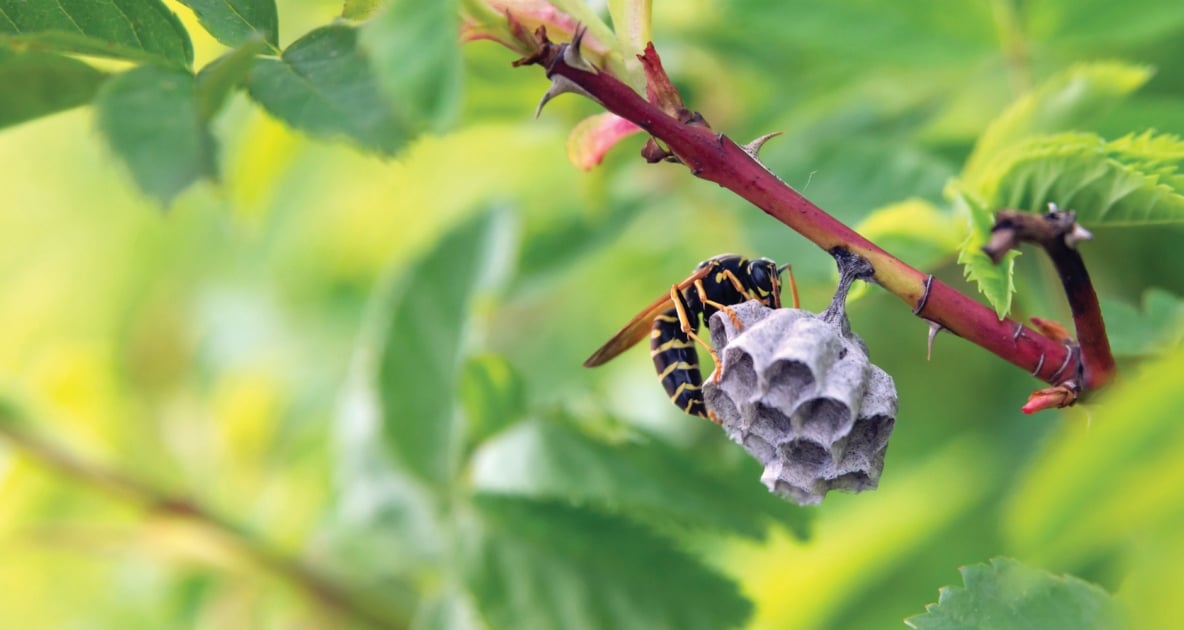 It’s that time of year when stinging insects are buzzing all around us. But do you know if you’re looking at a bee, wasp, hornet, or yellowjacket? Many people are confused with how to identify the differences among them—here’s how to tell them apart.

Bees, such as the bumblebee or honey bee that are so important to the pollination of our crops, usually have a chunkier appearance and appear to be fuzzy. They won’t join you at the picnic table because they are more focused on pollen and nectar.

Wasps are sleek and skinny in appearance, with the paper wasp being distinguishable with its hind longs hanging behind them during flight.

Yellowjackets have the classic black and yellow pattern on a shiny body and can range from ¾ of an inch to just over an inch in length.

Yellowjackets are the primary bad characters in many parts of the country and are blamed for the most aggressive behavior. Even so, not all yellowjackets are alike. The aerial yellowjacket (Dolichovespula arenaria) creates paper nests in trees and shrubs and is primarily a predator feeding on caterpillars and insects around the yard and garden. Its cousin, the western yellowjacket (Vespula pensylvanica), is typically the uninvited guest to picnics and outdoor gatherings as it’s a scavenger that clues into sweet items.

The western yellowjackets are also the ones that nest in the ground or in crevices of the home or structures and can surprise people when they mow or work around a nest potentially filled with thousands of stinging residents.

Bald-faced hornets look particularly menacing with a black body and white head making them fairly easy to spot even from a distance.

Bald-faced hornets (Dolichovespula maculate), which are a type of yellowjacket, also build their large papery nests in trees and shrubs, and are predators like the aerial yellowjacket. They can aggressively protect their nests, but don’t otherwise pose a nuisance at the table.

Paper wasps build their smallish, open papery nest underneath eaves, and unfortunately, sometimes below grills or other frequented areas. While not typically aggressive, they will protect their nest.

Most of these species rely on a single, mated queen to produce the workers and following year’s queen, except for the paper wasps who might start out with several queens in a nest that are ultimately whittled down to a dominant one.

By the end of last season, the mated queen of any of these species found a protected place to spend the winter, and will come out as the temperature warms in the spring. This is when homeowners need to start paying attention.

“When the queens emerge, they are looking for a nice, quiet place to build their nest,” said Jeff Hahn, Extension entomologist for the University of Minnesota.

The good news is even if you had a nest in the woodpile, or found a large paper nest tucked in your lilac bush, they won’t reuse them. All of the entomologists with whom I’ve spoken indicate that no wasp or yellowjacket species reuse their nests. But, to be extra cautious, you may want to check with your local Agricultural Extension agent, just to be sure, before removing any nests for closer inspection.

But these means you need to start looking at your home and property to see where they might end up instead.

“Look for the nests right away in the spring and early summer,” said Hahn. Regularly inspect the eaves of the house or outbuildings, and pay particular attention to rodent burrows or cracks and crevices on the outside of the home where yellowjackets may create their home. Remove small nests, and fill or cave in holes in the ground. Even openings between concrete blocks can be advantageous to the ground-dwelling species. Seal them before they set up residence. The one situation you want to desperately avoid is allowing yellowjackets access to the inside of your home.

Traps baited with pheromones are a popular option for many homeowners as a way to capture the mated queens before they’re able to start laying eggs for the season. Hahn is dubious of the effectiveness of this method since it’s practically impossible to catch all of the queens in a neighborhood. Just because you catch a few from your property, doesn’t mean there aren’t hundreds across the fence line.“There’s not a magic solution,” said Hahn. “People just need to be aware.”

And once summer and the higher wasp and yellowjacket populations arrive, you probably can’t significantly reduce the population, but you can learn to live with it.

Traps, whether baited by a chemical attractant or by a homemade sweet smelling concoction, work the best on the yellowjacket scavengers. While they don’t make a huge dent in the population, people can place them in areas to draw them away from the major human activity. If you do use traps, keep them along the perimeter of the yard. Don’t have them close to where people eat and socialize since, in essence, by doing so you’re bringing the yellowjackets to the party.

More good news: beneficial bees are not attracted to the same bait—whether it’s a pheromone or a food bait — they’re looking for nectar, so there is never a problem with trapping good bees.

Hahn recommends keeping any food at picnics covered until you sit down to eat, and even then, be very cautious as yellowjackets can be in the most inopportune places. Be particularly careful with beverages. Keep them covered when you’re not actively drinking, or at least check the inside of the can or bottle thoroughly before taking a big gulp. Many picnics have been ruined with swollen lips or painful tongues.

Speaking of stings, Hahn said yellowjackets and wasps do not bite. They sting. They are different than honey bees, who can only sting once and then die because they can’t pull out their barbed stinger, so it rips out their abdomen. Wasps have barbless stingers that do not tear out of their body. You might receive a brief nick, but it is a painful sting nonetheless.

As the weather warms, look at your yard and home with the eye of a queen searching for the perfect place to raise her brood, and do your best to minimize her options. While we never know how abundant the population might be each season, you can reduce the numbers directly around your home.

Now you know what the answer the next time someone asks, “is it a bee?”

Totally enjoyed the article on bees, wasp and yellow jackets. I do have to disagree with one statement though. Wasp WILL and DO bite. I’m 56 years old and have experienced this more than once.

Place mothballs in panty hose n tie n tack up under eaves etc. It helps alot by keeping the stinging pests away.

One day while cleaning stalls in my barn, I heard an angry buzzing sound only to look down at my t-shirt sleeve to see a yellow jacket biting at my loose sleeve and also stinging it. They had moved into the wall above my feed room & I suppose I got too close. I lost no time in calling my exterminator.

Another time, I disturbed a carpenter bee nest and I got attacked & bitten on my face for it! I appreciate honey bees/bumble bees but those others–not so much.

My husband and I live in an upstairs apartment. Every spring and summer when we go out on our balcony we have bees, and wasps coming around and we have to go inside. We don’t know where they come from. So we cannot enjoy our balcony in the evenings due to the bees and wasps. They even try to come into our apartment through the screens when I have the windows opened.

We have our lawn fertilized by a professional every year…and I find these ground wasps do not like it! My husband is allergic to bees and we have to very careful. We do hire a company that comes out once a month to spray also strictly for hornets/wasps/bees…and it certainly does help! I know the cost is high…but my husbands life is worth it! We love being outdoors so we have to be extra careful…there are some jobs he simply cannot do anymore!

kind of misleading about bees. if you have sweets, even sodas at your picnic. bees will show up.

I have ground bees every year about 30 to 40 holes in the ground on my front lawn. We have had an exterminator come and they treated the holes and the bees came back .Any help you could give me would be appreciated.

I don’t know if you are still reading this a year later, but here is what I did. When I noticed the bees were active, I cut a bunch of 12-ounch plastic pop and water bottles in half, then screwed the halves into the ground over each hole. I left them for 48 hours. I believe it drove them deeper into the woods. My lawn looked crazy for 2 days but my neighbors are pretty good. Another thing is that I don’t discourage skunks, moles or other critters. They eat grubs and larvae. I haven’t had a problem since the first year after I moved in.

Brenda B
Reply to  Lana Stanco

We had a big nest in the ground last year as well. At night we saw a skunk digging at the nest . After 2 nights the skunk left and there were no more wasps! The skunk ate them all!
Skunks do serve a purpose.

Susan Higgins
Reply to  Brenda B 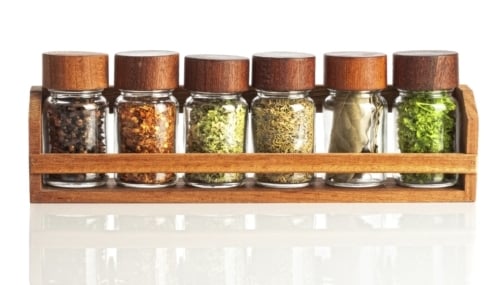