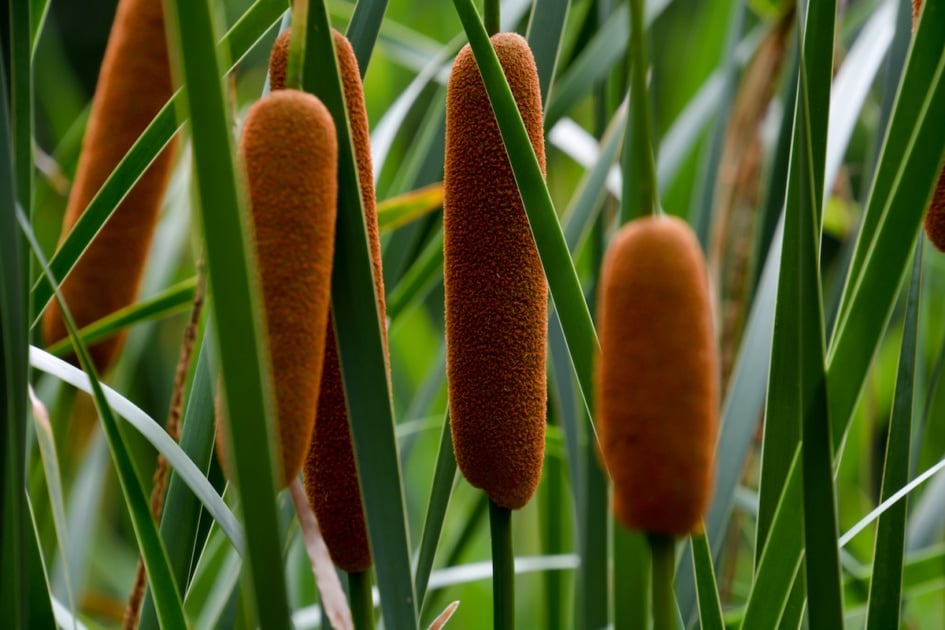 Late summer/early fall is the time of year when you’re apt to see stands of fuzzy brown cattails swaying in the breeze in wetlands all over the United States and Canada. In fact, anywhere there is a water source, you’ll likely find cattails growing. As a child, you may remember playing with these fluffy brown “tails” known as catkins. As common as cattails are, it’s surprising that we don’t put them to greater use. As it turns out, cattails (Typha latifolia) are one of the most versatile plants you’ll find and are one of the top 20 wild edible plants in North America.

Whether you’re a seasoned forager or just curious to see how to prepare a cattail for eating, read on!

Which Parts Are Edible?

Several parts of the plant are edible. In fact, cattails produce more starch per acre than crops like potatoes and yams. Yet unlike potatoes and yams, you can eat more than just the root. Different parts of the cattail plant produce something edible at different stages of development. (Note: Be sure you’re eating from a clean water and soil source, free of pesticides.)

Do NOT try to eat the catkins when they have gone to seed. As you’ll see in the video below, you’ll just get a mouthful of fluff. They

Cattail Roots: The roots (called rhizomes) are harvestable throughout the year, but they’re best in the fall and winter. To prepare a cattail root, clean it and trim away the smaller branching roots, leaving the large rhizome.  You can grill, bake or boil the root until it’s tender. Once cooked, eating a cattail root is similar to eating the leaves of an artichoke – strip the starch away from the fibers with your teeth. The buds attached to the rhizomes are also edible!  To make flour:  You can also use the roots to make flour, used as a thickening agent in cooking. Scrape and clean several cattail roots. Place roots on a lightly greased cookie sheet in a 200º F oven to dry overnight. Skin roots and remove fibers. Pound roots until fine. Let stand overnight to dry. Sift, and it’s ready to use.

Cattail Corn on the Cob: If you pick the catkins in the spring, while they’re still green and hidden in the leaves, you can eat them just like corn on the cob. Boil the catkins until they’re heated through, and then serve with butter, salt, and pepper.

Baking with Cattail Pollen: Once the catkins mature—usually by the end of June—you can harvest pollen by bending the catkins into a bag and shaking the pollen off. Cattails produce a lot of pollen, so you’ll end up with several pounds in no time. The pollen makes an excellent high-protein substitute for flour in your favorite baked goods.

Shoots and Stalks: In the spring, you can harvest both the new shoots and the white parts of the cattail stalks near the roots. You can cook and serve the shoots and stalks like asparagus, or you can clean them, slather on some peanut butter and eat them fresh.

Try this recipe that uses the plant’s roots, best gathered in the fall, from the Indiana Department of Natural Resources:

Directions:
Simmer the cattail roots in water for 40 minutes. Add remaining ingredients and simmer for 10 minutes.

Fun survival facts: If you’ve located cattails, you just found a water source, a food source, and a fuel source!

I’ve been a fan of cattails (intellectually) for many years. Never knew how to use them! This is so good to see – thank you!

Glad you enjoyed the article!

As a fuel source do you throw the cattails in a fire?

I recently cooked up some cattail root and they developed a purple color. Is that normal? It was definitely cattails tho. I have cooked them before but I don’t remember them turning purple so I was a little concerned. Is it a pollutant or do some just do that…

Hi Bec, interesting. We hadn’t heard of that but we’ll check around. Stay tuned.

For the recipe, do you remove the fiber before you boil the roots or do you leave them whole?

Cattails are associated with remediating contaminated marshes and waterway sites (mercury, lead, etc.) so it is of the UTMOST importance to know the source of water in which they grow before even thinking of taking any for food!! I have been a wild food educator for a decade and this is something I make sure everyone is aware of for their safety.

Thank you, Karen, this is excellent information and we’ll amend the story to include it.

ya gonna get on that or …

I suggest using only perhaps 15-20% cattail flour. Cattail flour does not react the same as wheat flour.