While rich, sweet, decadent chocolate makes a popular gift for one’s sweetheart, it’s not the only food that conjures up feelings of love. Turns out, there are many. Some might even leave you scratching your head and reaching for the breath mints!

Throughout history, men and women sought out foods, plants, and spices that purportedly ignited their ardor, with items like nettles, mandrake, mustard, pine nuts, and anise topping a long list of culinary candidates. Even common vegetables like asparagus and carrots were at one time thought to contribute to the healthy love lives of those who ate them, according to Roman physician Galen, who reported that “warm, moist, and windy” (i.e., gaseous) foods would point one’s emotional compass in the direction of affection.

Because chocolate is chock full of elements like “feel good” chemical anandamide, also known as AEA, as well as phenylethylamine, or PEA, which releases dopamine in the pleasure centers of the brain, many attest that it brings out strong feelings of amore–especially when presented in a bright red, heart-shaped box with a bow! In pure form, its primary ingredient, cacao, contains tryptophan, which helps promote a sense of contentment, as well as theobromine, which is a known stimulant much like caffeine.

7 Foods That Conjure Up Feelings of Love

While many would consider chocolate a can’t miss an entry in the “foods of love” category, especially on Valentine’s Day, experts have also weighed in on these other, less popular alimentary purveyors of passion:

A good source of B vitamins and boron, honey accordingly helps the body use and metabolize estrogen. It may also enhance testosterone levels in the blood.

Known for essential potassium, magnesium, and B vitamins, bananas also contain chelating materials and are a member of the plant family Bromeliaceae, as is the pineapple, whose effects are reported to enhance male libido.

This food, famous for keeping away vampires, and rued on a first date, nevertheless is full of allicin, known to increase blood circulation.

No, not the rock band, the real peppers. Known as catalysts for releasing endorphins, which make us feel good, chili peppers’ properties have also been cited for their anesthetic results. The great Montezuma (yes, that one) is said to have added chili to his chocolate drink before a romantic rendezvous, and fans of fiery foods sometimes note a lip-swelling or plumping effect from eating chili peppers that can appear attractive to the opposite sex.

Rich in B vitamins and high in fiber, according to new studies oats may be among the most potent of libido enhancers, underscoring the old adage “sow your wild oats.”

Highly aromatic, fresh lavender and/or its oil has been used in baths and fragrances for many hundreds of years. The plant is increasingly used in its fresh, dried, or infused state in cooking (check out these shortbread cookies!) and to flavor beverages. Some studies rate lavender as the most appealing scent to men. Be sure any lavender you ingest is labeled “food grade.”

In the end, many concur that when presented with an open heart, almost any food can be used to inspire feelings of love and affection. To paraphrase a famous quote, food is in the eye of the beholder.

For Susan, my wife, & me it was a strawberry & walnut salad.

To properly wash your broccoli and cauliflower, fill a bowl with cold water and soak the vegetables for a few minutes. This will help the water penetrate the nooks and crannies where bugs and dirt can hide. Then place in a colander and rinse again under cold water. Let drain fully before adding to recipes.
More hints & tips 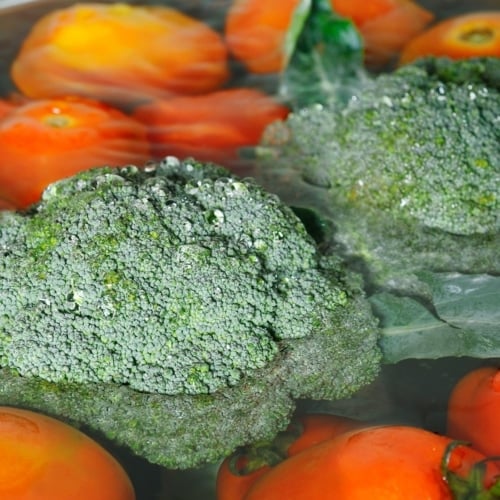