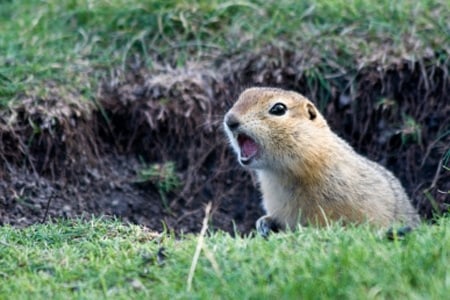 Gophers are native to the “New World.” There are 13 species of them found throughout most of the Midwest, the west, southern portions of Alabama and Georgia, and Florida. They are also found in parts of Alberta, Canada. Gophers are burrowing creatures that prefer light soils. However, they adapt well to many different terrains and soil types.

Most burrows are made close to the surface, but can be found as deep as two feet below the surface. Gophers use their teeth and/or claws to make their tunnels, depending on the species. They then tumble over in the tunnel and push the soil to the surface.

Gophers are herbivores. They feed exclusively on plants. Feeding occurs in their tunnels, where they consume the roots of plants and vegetation. The bulk of their diet is made up of forbs and grasses, and they are particular to alfalfa. Dandelions are an important food source for gophers. They will pull the entire plant into their tunnel and eat it in its entirety when they can.

Gophers have one litter per year in their northern range, with three to five young. In their southern range, they can have two litters per year.

While gophers can be an occasional nuisance to gardeners and homeowners, they can cause extensive and significant damage to local ecosystems and agriculture. The amount of soil disturbed by a single population of gophers in one area is usually measured in tons due to the amount of damage they can cause.

There are a few machines that can eliminate gophers on large farms and agricultural land. Some of these machines have long hoses that are hooked on one end to a running car or tractor, with the other end inserted into a tunnel. Others include combustion devices that create explosions in the tunnels. Of course, these machines are expensive and only practical for large properties where farmers must protect their livelihood. These methods should also only be used where it is safe and legal to do so.

Trapping or shooting gophers can be successful in certain circumstances, although neither method offers any solution for preventive maintenance. Rather than simply getting rid of a wildlife problem once it’s presented itself, it is always beneficial to be pro-active and diligent when trying to prevent or manage human/wildlife conflicts.

A few simpler methods of eliminating gophers from your property include over watering your lawn, planting shrubs and plants they do not eat, and/or applying repellents and homemade solutions that bother their senses of smell and taste. A few plants that are believed to repel gophers include natal plum, lavender, salvia, catmint, oleander, penstemons, rhaphiolepis, rosemary, and strawberries. The most popular natural deterrents are peppermint oil and castor oil. Some people also report success with stuffing scented fabric softener sheets into gopher tunnels. There are also a number of commercial gopher repellents on the market.

Some of these applications can be successful if you are diligent and change things up every week or so. Gophers will become accustomed to repellents if you do not use a combination of different ones on a regular basis. The biggest problem people have when using repellents and homemade mixes is finding a gopher’s main tunnel. If you are applying products to escape routes and secondary tunnels, such products will be less effective, or even totally ineffective.

If you are trying to defend a specific area, like a vegetable garden or a flower garden from gophers, the best strategy is to dig a two foot deep trench around the perimeter, lay down 1/4” of hardware cloth, then bury it. This will prevent gophers from burrowing into the area.

Shawn is a lifelong New Englander. He lives in Canton, Conn., with his wife Tami, mother, sister, and her three children. He and his wife have two grown children and two grandchildren. Shawn is an avid hunter, fisherman, and gardener. He is also a writer, a nuisance wildlife professional, small scale farmer, and scout leader. You can email him at [email protected].

I was told a plant called euphoria lathers has yellow flowers and gives off bad order under ground to rid ground moles . Does anyone know more about this?

The pictured animal above looks like a prairie dog to me. Prairie dogs live in groups and build high mound around their open tunnel. One or more will sit on the mound, watching for predators. They will warn the others with short little barks. In contrast gophers are mainly solitary, especially the male. They guard their tunnel system against other gophers, except during breeding times. The young are weaned after a short time and then leave to build their own tunnels. Their mounds are crescent shaped with a, usually, visible plug within the crescent. Moles, on the other hand, build a conical shaped mound with no visible plug. I have done battle with gophers for years. Since we are in the country with woods on three sides of us, it is ongoing. I’ve used traps and caught quite a few that way until other wile creatures found them to be an easy treat, taking both the carcass and trap. That was becoming too expensive with the trap loss. Also they become wise and will bury the trap and avoid that tunnel. Also poisoned the tunnels and had a oxygen/gas outfit to blow them up. The cannon is fun but you don’t know if it was successful and it doesn’t collapse the tunnels, unless they are close to the surface. There is also a danger of starting a fire in dry grass. We had to quit for a couple of years due to the drought. However, the only thing all this does is slow them down. They destroyed my garden and this year I dug a trench,laid down hardware cloth, framed it with large cedar logs that we cut, and filled it with dirt. Had a nice small garden but will have to get used to gardening small. Haven’t tried the exhaust hose thing. Heard it can damage the engine, but don’t know for sure. Thinking about getting a varmint dog. Had a Doberman, and my daughter a Lab. When those two together they were a team. The Lab would dig them out and kill them, while my Doberman would eat them. Meanwhile the varmint war goes on.

Lisa,
A mound is a mole and tunnel is a gopher.

I’ve lived on an acreage for 8 yrs now and have found an easy solution for gophers. I tried everything I heard. I heard some women talking about the peppermint oil which gave me an idea. I took a peppermint candy and hit it with my tool/hammer while it’s still in the wrapper. Then you dig into several different “arms” of the tunnel. (With the hoe end of my hand tool I quicklly pop down into the tunnel without caving it in) Then I unwrap the crushed peppermint and sprinkle it into the tunnel in several different areas of the branches or “arms” of the tunnel and cover it back up. This method will rid of them for a good 3 months. At the first sign of them moving back in, I repeat. Best non-poisionous method I’ve ever tried!!!

Several pests make the tunnels and mounds; how do I determine which pest is in my yard?

I buy a commercial product made by Cooke’s especially for gophers. It is a poisoned grain. When I find a new mound, I oush down into it with a old mop handle until I hit the tunnel. I pour some of the grian down into it then cover it over with the dirt. The gopher dies in the tunnel, which prevents others from moving into the tunnel. Works for me. If oyu trap them, make sure to push the carcass back down into the tunnel to prevent others from taking up residence. I go out every morning and look for new mounds to treat. Soon you will have no more gophers until the next batch moves in.

One friend of mine had a terrible infestation of the varmints. He was worried they would undermine the foundation of his home and it is built into a hillside. He got a hose that clamps onto his tailpipe and goes into the hole of the gophers. Starts the vehicle up and lets it run for a while and viola, no more gopher problem for a while.

How do you get rid of voles?

Maxine, Shawn did a story on moles and voles a few months ago: Pests of the Month: Moles and Voles

A good way to rid gophers is to put human hair down the gopher hole and add water to push it further down. Really works.

Do you have any solutions for chipmunks? We thought they were cute when they first moved in a couple years ago but now they are getting totally out of hand. They’re a lot quicker and more wary than gophers and don’t sit still very long for a shot.

Got a headache? Try applying a few drops of peppermint oil topically to the forehead and temples. Peppermint essential oil is calming and numbing, and can help alleviate tension headaches and migraines.
More hints & tips 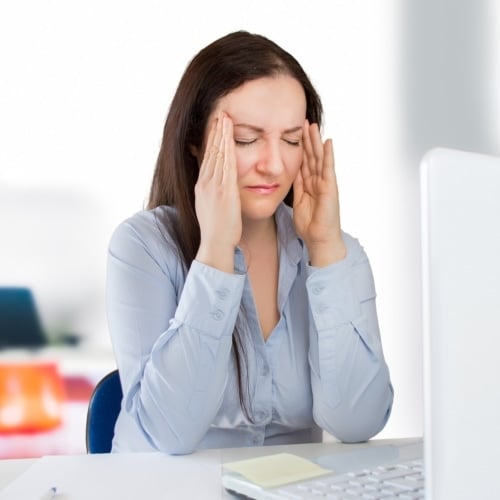