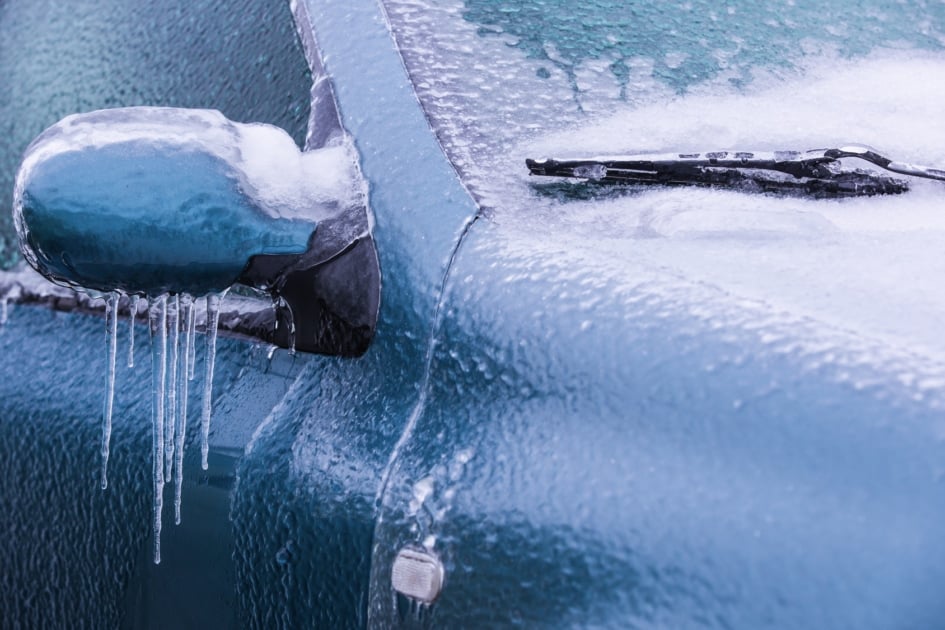 No matter what the season, all kinds of things can fall from the sky in the form of precipitation. But there’s some confusion about what’s what when the temperature drops. Here’s an explanation of the differences between the different types of frozen precipitation that can occur and when you’re most likely to see it:

While hail is usually associated with summer storms, it can form any time, anywhere, when the conditions are right. But many people confuse hail with other types of frozen precipitation. Here’s how hail differs:

Hailstones start with water droplets that are carried high into the clouds (past the freezing level) by the updrafts of a thunderstorm. The frozen water droplets fall once more, sometimes melting a bit as they reach warmer layers of air, and then they’re carried back up into the freezing layer by yet another updraft. The more this happens, the larger the hailstones get. When the updraft can no longer support the weight of the hail, or it weakens, they fall.

To be classified as a hailstone, balls of ice need to be at least 5 millimeters in diameter, although they’re often much larger than this. In fact, the largest recorded hailstone ever fell to Earth on July 23, 2010 in Vivian, South Dakota. This hailstone, found by local resident Les Scott, was an enormous 8 inches in diameter — and that was after it had melted for a little while. At two pounds in weight, this massive chunk of ice was nearly the size of a volleyball.

Hailstones are usually milky white in color and very hard. They can do severe damage to trees and property and can be deadly to people and livestock.

Sleet is probably the most perplexing kind of precipitation to fall. Many people use the term sleet when referring to the mix of rain and snow that you sometimes see when a line of warm and cold air masses meet. Both the British and the Canadians refer to these rain-snow mixes as sleet, but the unofficial term for this wintery mix is “snain.”

Americans define sleet as ice pellets. It’s very similar to hail, but much smaller — less than 5 millimeters in diameter — and forming under different conditions. Sleet is a winter weather occurrence and is usually appear as clear, hard pellets..

Sleet starts out as snowflakes high in the clouds, then falls through a warm layer of air, where it melts and turns into partially melted snowflakes and raindrops. Before reaching the Earth’s surface, sleet must fall through another layer of below-freezing air, where it re-freezes into ice pellets. It hits the ground with that all-too-familiar sound that’s unmistakable to those of us who live in cold climates!

Freezing rain is another winter occurrence and probably the most dangerous for pedestrians and motorists. The formation of freezing rain is very similar to that of sleet — so similar, in fact, that you’ll often see sleet and freezing rain at the same time if the surface temperature is just right—32 degrees F.  Like sleet, freezing rain usually starts as snowflakes, and then falls through a warm layer in the atmosphere where it turns into rain. It refreezes when it touches surfaces that are below freezing temperatures. It’s telltale mark is that “glazed donut” effect on cars and sidewalks, and is what downs tree limbs and power lines.

What? You’ve never heard of graupel? It’s a real thing and looks a lot like sleet or small hailstones, but the small balls are made of snow, not ice, and they are white. They almost look like tiny Styrofoam pellets.

This form of precipitation starts as snowflakes, then those snowflakes grow larger and larger as supercooled water funnels up into the clouds and bonds to the flakes. You can tell the difference between graupel and hail or sleet by picking up the tiny snowballs — if they’re soft and easy to crush, it’s graupel. In fact, graupel is often referred to as “soft hail.” It often bounces and breaks apart once it hits the ground.

What’s falling in your backyard? Be sure to take pictures and tag us on social media.  If you’re lucky, you’ll get a chance to see a little bit of everything this winter!

I’d like to learn more about gardening and astronomy

So, what are these? Micro icicles? Falling today in Southern Illinois in Bond County. Between 1/8 and 1/4 inch long, light and fluffy.
Photo of the precip on my car windows

Had some this morning in Vermont’s Northeast Kingdom.

I live in South Central Michigan. We see graupel occasionally. In fact we are experiencing some today!

I saw graupel this morning when I took out the trash. I have seen lots of frozen things on the ground in my 71 years, but never these pretty, white things. I had to look it up on the internet to find out what it was. We’re never too old to learn, folks.

Excellent website. Just saw some graupel today in the Boston suburbs. First time I’ve seen it and first time I learned the name.

Thanks, Jennifer! Graupel is so strange, isn’t it?

Finally!!! An answer!!! Went out a couple weeks ago and thought my flower pot fell over and the fertilizer from the dirt was on the ground, but it was all over. Tried to pick it up and it melted. I told my mother about it, because it was so strange. I have seen a lot of snow, etc. but this is the first time that I can say I have ever seen this. Looked like styrofoam all over. Graupel, I will always remember. Thanks!!!!

During the past couples days I have hear the weather people in the Seattle area using the word graupel in the weather report.I looked it up only to find it is a term used for soft hail. When I asked some of my older friends about the condition, we came to the same conclussion, ” our weather people have way to much time on their hands”. Oddly enought not to be out done I heard another broadcaster on a different channel use the word on one of their broadcast.Please lets just call it what we all know and understand “Hail “.

Hi Jerry Morris, Graupel is a bit different from hail, and actually almost looks like styrofoam dust, in little round light pellets, in addition to the time of year you’ll find it. Its makeup is different from straight ice. It is an odd name, though, isn’t it.

A Ford
Reply to  jerry morris

But it’s different than hail. It’s snowy pellets not icy pellets!
❄️❄️❄️We’ve had it about 10 times today for about 5 minutes at a time with sunshine in between.
Freaky but cool.

Now it has a name! I have only referred to it by saying it is snowing little snowballs – now I can call it “graupel” if I just knew how to properly pronounce it….”graw-puhl” ??? Had an occurrence of this a couple years ago in central Kentucky.

In 78 years in western Mass. (Berkshire County), I have never seen or heard of the term “graupel”.

To Laura from PA. I live in York and we have had graupel here. I remember the Channel 8 weather team talking about it and wondering how it was spelled. Thanks to Amber for clearing up that mystery. Very informative article.

We see it all here in South Point, Ohio. We are the southern most point of Ohio. I can stand at the Ohio river in South Point and see Ceredo Kenova, W.Va. and Calettsburg, Ky. on the other side. We get rain, sleet, snow, grapple and all the rest her. It’s been an extremely mild winter. I miss seeing snow.?

Thanks for sharing Amber. I have seen it all over the years as an over-the-road truck driver, but in retirement, I never leave central Florida so seldom see a snowflake and haven’t been under any hail in several years.

We had graupel this week at sea level mid coastal maine

We got grauple in Texas probably two years ago. I thought it looked like dip n dots.

Thanks for reading everyone! To answer Laura’s question: My understanding is that graupel is most common at high altitudes, but if you’re getting a wintry mix of precipitation, sometimes graupel will fall with the rain and snow.

I see this in west central MN once in a while also. I didn’t know there was a name, however. Yes, I dig the Farmer’s Almanac, also!

We see it in SW Colorado

Graupel……..here in the South, we call it pop corn snow….

I have lived in Pa.all my life,never saw Graupel before,what state do other people see it.

I always called “Graupel” by a different name, “Hominy Snow”.

I thought that graupel was a general term with hoar frost, rime frost, et al in the basket.

I had not heard the term “Graupel” before & neither had my husband (who is an Air Traffic Controller). Fascinating article! I depend on The Farmer’s Almanac to help me navigate the many mysteries of life, however, so MANY are ignorant of it’s existence let alone it’s relevance. I LOVE FARMER’S ALMANAC!

I always called this Sleet. Now that I see the clear distinction I will not make the same mistake. This is great for trivia question!
Thanks – good to know.

My dad always called this “hominy snow” (because it looked like tiny balls of hominy corn). It usually precedes larger snow.

You have not mention hoar frost, I thought this was part of the snow falling family.
Tks. 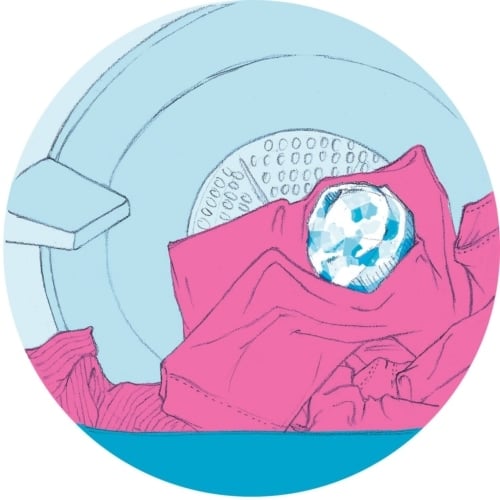