The two rat sub-species that North Americans are generally concerned with are the Norway rat and the roof rat, also known as the brown rat and black rat, respectively. The roof rat is said to have come here with the first settlers from Europe, while the Norway rat is said to have come by ship around 1775. They live and breed anywhere humans are, because they prefer habitat that is shared with humans. Unlike most other rodent species, rats don’t do well in grassy or wooded habitats, where there is too much competition from native species, and too many predators.

Rats are phenomenal climbers, excellent swimmers, and very agile. And, despite its larger size, a grown, full-size rat can enter into a hole the size of a quarter. They can scale poles and electrical conduits, jump three feet high, and up to four feet horizontally.

A rat’s range is typically only about 75-500 feet, depending on habitat conditions such as food and water sources, and competition. Norway rats have been known to travel up to a half mile daily to access a food source, however. Norway rats build and live in dens and burrows that are usually around eighteen inches deep and three feet long. These dens have more than one opening for escape and sometimes these openings are loosely covered over for concealment. In buildings they will live inside walls, under cabinets, in plumbing voids, and under cluttered materials. Roof rats are commonly known to live up off the ground. They travel on above ground objects such as utility and phone lines, as squirrels do. If they are found to be living in a building or structure, it is generally high up, such as in an attic, or in voids and walls in the upper levels of a home. Outside, they tend to nest in trees and other high objects.

Both species are primarily nocturnal. Day sightings of rats can usually be attributed to high density populations, low food sources and juveniles not being able to compete at night with adults.

Rats will eat basically any food source. They are omnivorous, eating both animal and plant matter. Norway rats are known to eat more animal matter than roof rats. They will also consume insects, bird eggs, and even mice when their food supply is low. Adults require approximately one ounce of food per day in addition to a good water source.

Rats breed year round. Breeding age is usually reached at two to three months, with average litter sizes ranging from eight to twelve offspring for the Norway rat and five to six for the roof rat. One female can generally wean twenty young per year.

There are many problems and health concerns associated with rats. They transmit more diseases to humans than any other insect or animal, including the bubonic plague, salmonella, hantavirus, tularemia, and leptospirosis. More than fifteen thousand rat bites occur annually in the United States, usually to the elderly, incapacitated individuals, and children. All rat bites should be treated by a doctor.

Rats contaminate human food by spreading their urine and feces, and cause structural damage to buildings. They can gnaw through most any material, including lead pipes, and often cause electrical shorts and even fires by gnawing through electrical wires.

There are many preventive methods used to reduce the risk of rats from becoming your tenants or personal guests. Wire mesh, expansion foam, lumber, caulking and sheet metal are commonly used to seal up possible entry points to buildings. Check for openings along foundations, including places where conduits enter structures, heating vents, rotted soffits and roof liners, chimney caps, fill and vent pipes for your home heating oil tank, etc. Basically, rats can enter anywhere, high or low, with an opening of half an inch or more. It can be time consuming, and almost mind numbing, to find and seal all possible points of entry, but it beats the alternative.

As with most other animals covered in this series, it’s important to practice preventive maintenance to ensure you do not become a full time rat cop or exterminator on your own property. Keep your place free of debris and clutter, both inside and out. Keep animal feed and dog food in strong, clean, secure containers. Keep your grass mowed and weeds down, especially around buildings. Make sure to clean up bird feed areas and don’t let used up materials from seeds pile up. Also, remember to keep your garbage cleaned up and hauled out regularly.

There are many different methods for removing rats from a dwelling or building, and the most effective will depends on your own specific situation. The two most common approaches rats are poison and traps. Both methods can be effective, if implemented properly. The main concern with poison is, of course, protecting young children and pets. If you plan to use poison, it should always be placed in closed and secured bait stations installed in areas that are not accessible to children or pets. Traps are generally a safer option and have the added benefit of keeping the rat in place, so it doesn’t expire in an inaccessible location, such as inside your walls, creating a smell. If you prefer, and if you’re sure you’ve sealed off all possible re-entry points into your home, you could also try a live trap, and free the rat outside. Chances are, however, that if there is one rat, there are many.

Remember, rats are the second most successful animal on this planet, with the potential to become the first. Stay diligent and proactive and your chance of having a problem with rats will be minimized.

It’s Pack Rats at my Ranch Pards. Boy do I hate ’em! They git shot shells from my 45 now. Tends not to be too healthy for em.

I’ll have to disagree with your advice Judith. In Texas where a typical summer day reaches beyond one hundred degrees, pets must have water available throughout the day or beloved Fido will be a dead dog. One would be guilty of animal cruelty for depriving a pet of water, just as food.

Secondly I have personally put poison out to kill rats only to have it die in the attic or wall more than once so it most certainly is not unusual for these pests to die where they / we live.
It has also been my personal experience that not all cats prey on rats or mice, they simply don’t have to hunt for food and a good portion of the population of cats choose not to.

Lastly, pointing out mostly anything to a small child and telling them “no” will most assuredly result in the child going back to further explore the forbidden item which is now simply intriguing.

I felt the need to share from my own experience as a mother and pet owner because I would hate for a trusting person to find out the hard way.

Great Info … Here’s a little more:
Putting out poison usually DOES NOT result in the rat dying in a wall or other inaccessible space …. Why? … Because these products dehydrate, and the rat will GO OUTSIDE in search of water, and therefore, die outside. Tip: NEVER leave a pet’s bowl of water out overnight. Fido and Fidet only need water 2x a day, usually with morning and evening meal. It’s never necessary to leave a water bowl accessible all day. In the wild, animals go to the watering hole only 2x a day. OK, well, provide extra water after rowdy play, or an extended walk (you’re right!).
Personally, I would never “catch and release” a rat, or a mosquito, or a mold spore … where you gonna take it to? … Really! … Really? … So, it’s ok with you, for someone else to release their captured pest near your home? Please! Trust me, the wooded areas in our communities have enough rats already! Why do you think they are at your house? Please!
Also, how about man’s other best friend, the lovable kitty cat! Given proper access, they will happily keep these pests away! BTW: they also keep snakes away!
IDEA: To MAKE SURE that bait stations out of reach of kids and pets, try this: is the rat coming through a space around the pipes under your sink? Look for ragged edges around the pipe, and droppings. Slip that bait station, box, or pellets through that space and drop into the wall itself, … done! Do you see little black droppings in a drawer? … in the back of a cabinet? … or closet? … so, put the bait station, then CLOSE IT … the rat will find it … they’ve been there before, right?
BEFORE PUTTING OUT BAIT, show your kids and explain … then, show your pets and do the whole “no! bad!” angry tone and scowl on the face routine, like you do when scolding them to stay off of table tops and counter spaces. And do the same with toddlers, like you do when teaching not to touch something hot, like the stove, or nasty, like playing in the bathroom bowl. They’ll get the idea, in case they accidentally come across the bait stations. OH, one more idea: wrap the extra bait stations in several layers plastic wrap or foil, then mark the outside with skull and crossbones and the word “poison.” STORE them in the back of the cabinet over your refrigerator, … NOT under the sink, to be accidentally accessed by curious pets or toddlers.
Last thought: You said rats are the “second most successful” … what’s the first? Mice? Roaches? (not an animal) Mosquitoes? Flies? (also not animals) … OH, I know: HUMANS! Ok, well, I feel successful! TYG! 😉

If your shoes are emitting an unpleasant odor, try stuffing newspaper in them. The paper absorbs the odor and perspiration and keeps shoes in shape.
More hints & tips 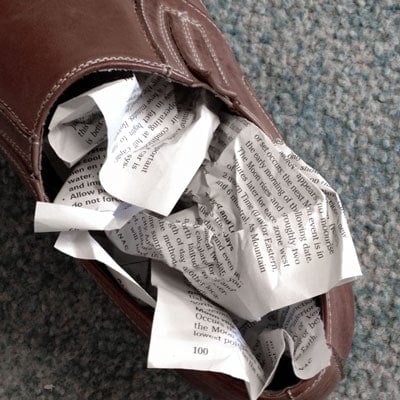