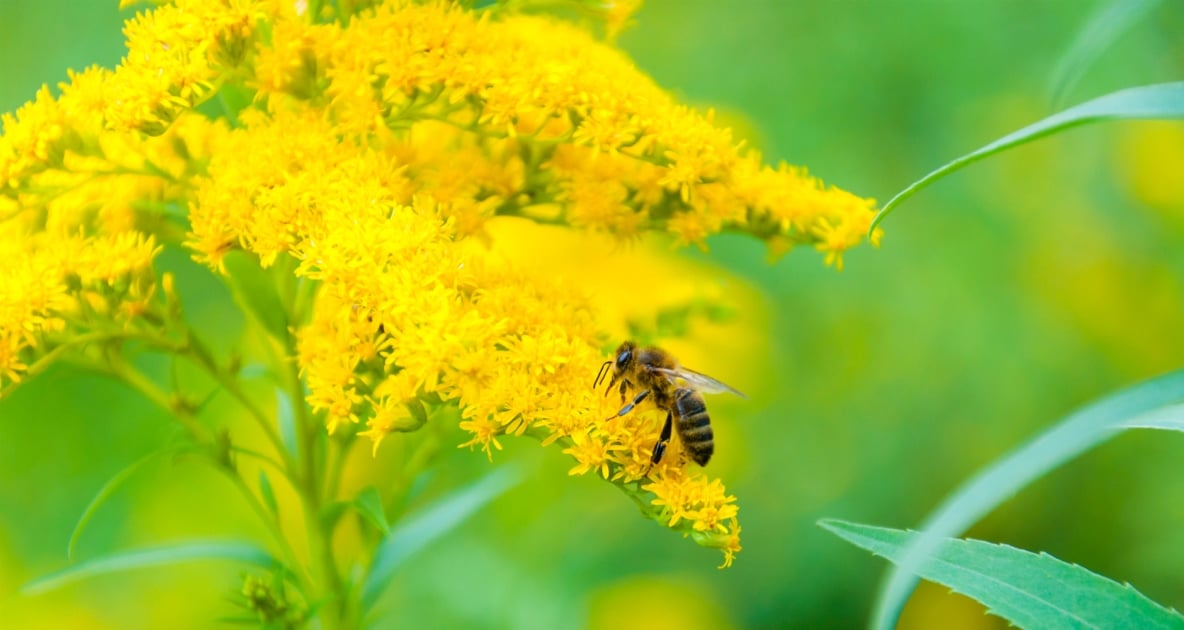 Did you know that throughout North America, there are more than 100 different varieties of goldenrod? This member of the daisy family tends to appear in all its bright yellow glory in abandoned fields, along roadsides, and anywhere else it can grow undisturbed. The multitudes of golden blooms appear in the late summer and throughout fall, adding their rich color to the landscape, and attracting many beneficial insects.

The Source of the Sneeze?

Although this herb (yes, it’s technically an herb!) is sometimes considered a nuisance weed by gardeners and is commonly (and mistakenly) blamed for seasonal allergies. It blooms at the same time as ragweed, which the real culprit behind hay fever. So if you’re sneezing this time of year, don’t blame goldenrod, and leave it for the bees!

Goldenrod actually has a variety of uses, and there are many myths and legends surrounding it. People have used it to make dye, as a cure-all, and even as a good luck charm. In fact, during the American Revolution, when colonists ran out of British tea, they made a beverage – called Liberty Tea – from goldenrod.

The scientific name for the goldenrod family is “Solidago,” which comes from the Latin word solidus or “whole.” Experts believe that this refers to goldenrod’s healing properties. Herbalists around the world have used this plant to treat anything from inflammation to urinary tract infections.

The Native Americans, for instance, boiled leaves and used them externally as an antiseptic for healing wounds and relief from eczema, arthritis, and many other skin conditions and internally to treat ulcers and problems with the lungs and kidneys. Some tribes referred to their goldenrod mixtures as “sun medicine.” Pioneers used goldenrod as a salve for easing the pain that comes with bee stings.

More recently, German researchers have officially recognized goldenrod as a particularly effective treatment for kidney stones. And in 1957, herbalist John Gerard claimed that there was no better herb for staunching the flow of blood from a wound.

Note: While there are no known side effects of goldenrod, either alone or with other drugs or herbs, you should avoid it if you are pregnant, or have serious heart or kidney problems.

Several traditions indicate that people found goldenrod useful for more than medicine. In Great Britain, for instance, it’s said that goldenrod will point the way towards buried gold and silver. Here are a few more bits of traditional wisdom:

Goldenrod in Myths and Legends

Many flowers have great stories surrounding them, and goldenrod is no exception. In one legend, an elderly woman walking through a forest at night. She was tired and scared, and as she walked, she asked the trees around her for a walking stick. No tree would agree to help, but she finally found a small stick on the forest floor. She asked the stick if it would help, and the stick agreed, so she leaned on it throughout the rest of her journey. When she finally made her way out of the forest, she transformed into a fairy princess. As a reward, she sprinkled gold dust on the stick, transforming it into goldenrod.

Another myth tells of two young girls who visited an old woman that was rumored to have magic powers. One girl had golden hair and the other had dark violet eyes. The golden-haired girl asked the old woman to make her into something that everyone admired, while the girl with the violet eyes wanted to always be the golden-haired girl’s best friend.

According to the legend, the old woman gave each girl a corn cake, and after that day, the girls were never seen again. But wherever the girls had walked, there grew two flowers that no one had ever seen before – the goldenrod and the purple aster. The people who tell this tale say that this legend is the reason why asters and goldenrods pair so well together in fall landscapes and floral arrangements.

So when you pass by fields this wispy yellow wildflower growing in abundance, view it as more than just a weed, and remember its legends, beauty, and power to heal!

I chopped down some goldenrod believing it was a weed. Now I learn it’s good stuff.

Glad you enjoyed the story!

I remember as a child the name of the paper we used was called “goldenrod”.

Becka Duke Aldava is this your cure. It always grows in the back pasture every fall

So many things nature provides, are beneficial. Read The Farmers Almanac to learn so much!

Surprise your kids with these mini Jack-O-Lantern treats in their lunchboxes! Simply draw faces on the skin of oranges or mini tangerines with a permanent marker (wash and dry the fruit first for best results). Let ink dry completely before packing.
More hints & tips 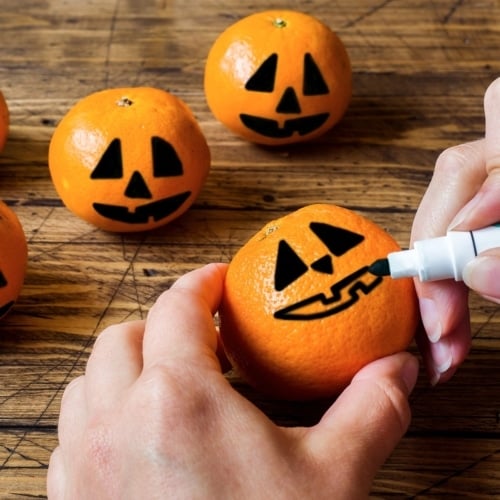