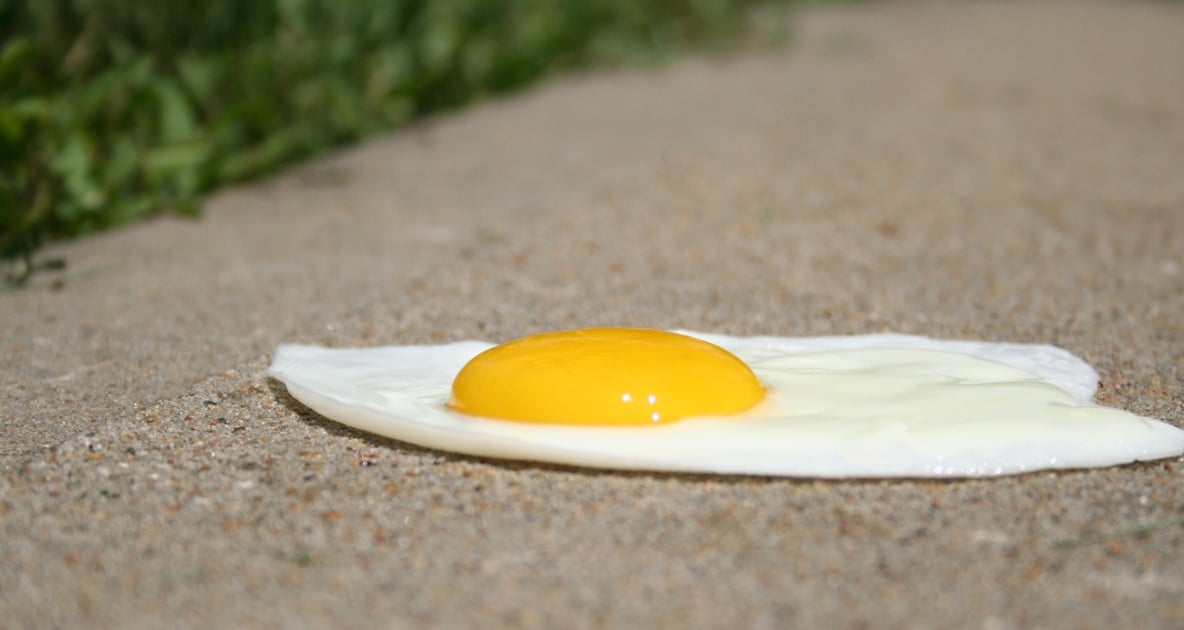 You’ve heard the expression before, “it’s hot enough to fry an egg!” But can summer weather ever really get that hot?

Summer afternoons can get pretty steamy, especially during the Dog Days of summer—the stretch of hottest days from July 3 to August 11. But to actually fry something? Here’s the eggs-planation.

An egg needs to reach a temperature of around 160º Fahrenheit before it’ll cook. The hottest  temperature ever recorded on Earth is nowhere near this (the record is 134° F recorded in Death Valley, California on July 10, 1913), but because concrete and pavement surfaces absorb and hold the Sun’s heat, sidewalk surfaces can actually heat tens of degrees hotter than the air temperature. So in theory, outdoor temperatures do get hot enough to cook a raw egg on the ground.

So, why don’t most cook-an-egg-on-the-road experiments work?

In order to cook the egg, the ground must remain at or above the 160° mark. But this is hard to achieve. First, the sidewalk doesn’t hold the Sun’s heat for more than a few hours, which isn’t hot enough for a long enough period of time to fully cook the egg.

Also, hot and dry air doesn’t transfer heat as efficiently to food as humid air does. So, even if the pavement is a scorching 160° F or more, all that heat won’t transfer to the egg. In fact, hot and dry air speeds up evaporation, which actually cools the egg somewhat.

What’s the origin of this saying?

So if you can’t really cook an egg on the pavement, where did the term “it’s hot enough to cook an egg” saying come from? No one really knows! What is known is that it’s been around since 1899, when it first appeared in The Atlanta Constitution newspaper. With summer heat a constant force, hotter every year, it’s one expression that’ll never cool off.

Interesting research! It is possible to prepare commercially.

Hi Cliff, What a cool memory! There are some extreme situations when cooking an egg on the ground could be possible. Sounds like your dad found one!

Usually though, the best summer heat can do is cook the edges of an egg’s whites, even if the egg is left outside all day long. The egg steals heat from the ground to cook, and it takes time for the ground to absorb sunlight and replenish the heat the egg takes. Sadly, this doesn’t happen quick enough to KEEP the egg cooking.

When I was a kid, Dad said this one summer day in WV in the 1950s
We had a big flat rock for a step as I remember it fried the egg in a matter of minutes.
Guess the rock held the heat better than concrete does.

Make Your Own Toilet Bowl Cleaner

You can clean the toilet without chemicals! Sprinkle 1/4 cup of baking soda around the edges of the bowl, then carefully pour 1/4 cup of vinegar onto the baking soda. Let it foam up. Scrub with a toilet brush and flush.
More hints & tips