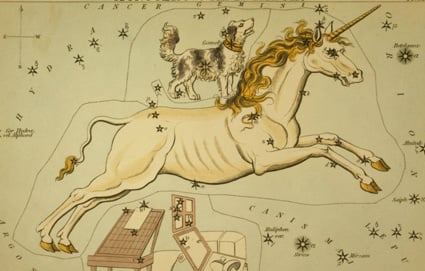 Monocerous is a faint winter constellation that sits near the celestial equator. It is one of 88 official modern constellations, and was among the 48 constellations listed by the Second Century Greek astronomer Ptolemy.

If you think the name sounds a bit like rhinoceros, you’re right. Both names come from Greek word for “horn.” While rhinoceros means “horned nose,” monoceros means “single horn,” in contrast with the many two-horned animals the ancient Greeks would have been familiar with. Some translate the name to mean unicorn, though it is not clear that the creature the Greeks named monoceros was meant to be the same as the unicorn, a creature that was much sought after during the middle ages and renaissance.

It contains 32 stars, four of which make up its zigzagging shape. It is not easily seen with the naked eye, as it has only two bright stars, Alpha Monocerotis and Gamma Monocerotis. Even so, many of the stars it contains are interesting. Beta Monocerotis is a triple star system, made up of three stars that form a triangle, while Epsilon Monocerotis is a fixed binary system. Possibly the most interesting star in the constellation is Plaskett’s Star, a binary system with a combined mass that is said to be 100 times larger our own Sun.

While most ancient constellations are rich with mythological associations, monoceros actually isn’t. Though we know unicorns to be mythological creatures today, monoceros was considered to be a real animal in ancient Greece. There is a lot of controversy over whether the name was actually intended to describe a unicorn, as we would understand it today, or some other creature. There is much speculation that the name referred to a mutation of a two-horned animal, such as the African oryx, goat, or some type of deer, or even that it was coined to describe the rhinoceros. Later illustrators eventually decided on the classical white unicorn popular in European heraldry. Whatever animal it was supposed to be, it is immortalized in the sky to this very day.