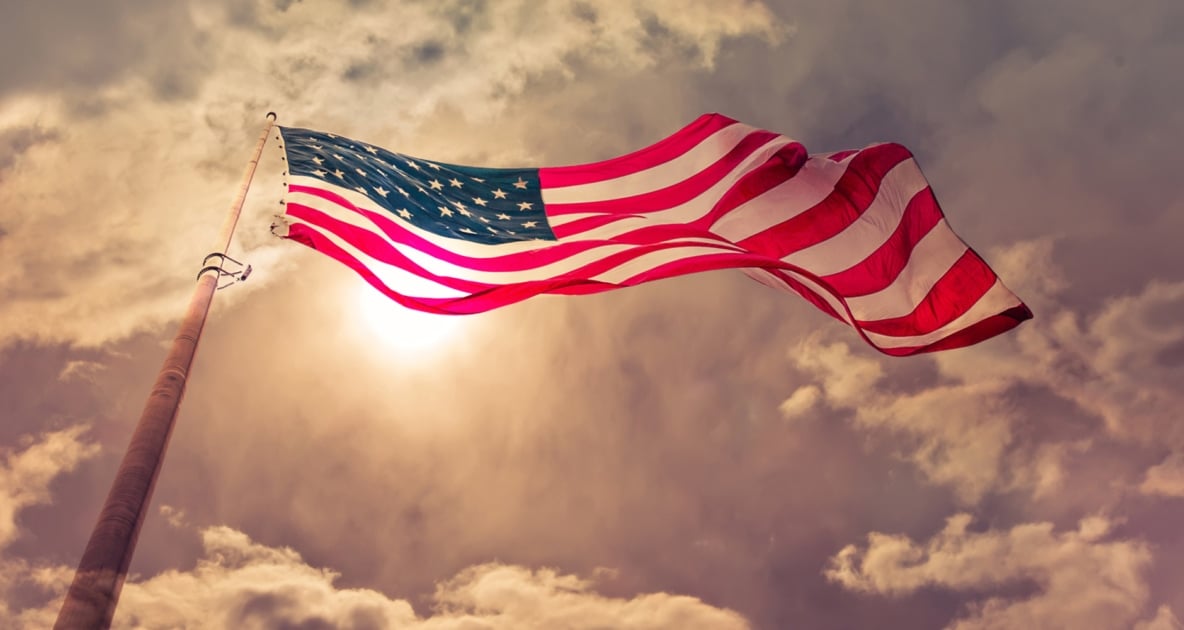 How did a poem, penned by Francis Scott Key on September 13, 1814, become our national anthem? And why do we celebrate it on March 3rd?

A Message of Endurance and Perseverance

While the anthems of most countries are either martial victory songs or tend to communicate other laudatory or self-congratulatory sentiments, “The Star Spangled Banner” is unique in its message of endurance and perseverance. Originally titled “Defence of Fort McHenry,” Key penned his poem during a naval attack on Fort McHenry in Baltimore, on the Chesapeake Bay, by British ships during the war of 1812. A battle we almost lost, following a battle where Washington D.C. itself was captured and burned.

The fort was bombarded viciously on the night of September 7, 1814. The rockets’ red glare, and bombs bursting in air, were actual rockets and bombs fired by warships like the HMS Erebus and HMS Meteor. Francis Scott Key and John Stuart Skinner were detained by the British during a prisoner exchange mission. They watched the battle unfold in the pouring rain from the HMS Surprise. Key was able to determine that the Fort’s storm flag had survived the barrage and that by dawn, the larger revile flag was proudly raised. That 15-star flag, known as the Star Spangled Banner, is now on display at the Smithsonian’s National Museum of American History.

The anthem commemorates not exactly victory, but the ability to withstand attack; enduring and continuing even when the odds are not in our favor. It’s one reason the song was so poignant during the 9/11 terrorist attacks. Because despite losing so many of our countrymen, we proudly raise our flag and refuse to be defeated.

The melody, like many anthems, was borrowed from an existing song, a popular tune called, To Anacreon in Heaven.

“The Star Spangled Banner,” much as “God Bless America” today, found its way into patriotic celebrations across the country. In 1916, President Woodrow Wilson declared that the song be played at all appropriate military ceremonies. The first time it was played at a sporting event was during the 7th inning of game 1 of the 1918 World Series between the Boston Red Sox and the Chicago Cubs.

On March 3, 1931, President Herbert Hoover signed a law making The Star Spangled Banner the National Anthem of the United States of America. And today, we celebrate March 3rd as “National Anthem Day” each year.

The song has four verses, but usually, only the first stanza of the poem is sung. Here are the full lyrics.

O say can you see by the dawn’s early light,
What so proudly we hailed at the twilight’s last gleaming,
Whose broad stripes and bright stars through the perilous fight,
O’er the ramparts we watched, were so gallantly streaming?
And the rockets’ red glare, the bombs bursting in air,
Gave proof through the night that our flag was still there;
O say does that star-spangled banner yet wave,
O’er the land of the free and the home of the brave?

On the shore dimly seen through the mists of the deep,
Where the foe’s haughty host in dread silence reposes,
What is that which the breeze, o’er the towering steep,
As it fitfully blows, half conceals, half discloses?
Now it catches the gleam of the morning’s first beam,
In full glory reflected now shines in the stream:
‘Tis the star-spangled banner, O! long may it wave
O’er the land of the free and the home of the brave.

And where is that band who so vauntingly swore
That the havoc of war and the battle’s confusion,
A home and a country, should leave us no more?
Their blood has washed out their foul footsteps’ pollution.
No refuge could save the hireling and slave
From the terror of flight, or the gloom of the grave:
And the star-spangled banner in triumph doth wave,
O’er the land of the free and the home of the brave.

O thus be it ever, when freemen shall stand
Between their loved homes and the war’s desolation.
Blest with vict’ry and peace, may the Heav’n rescued land
Praise the Power that hath made and preserved us a nation!
Then conquer we must, when our cause it is just,
And this be our motto: “In God is our trust.”
And the star-spangled banner in triumph shall wave
O’er the land of the free and the home of the brave!

What was our national anthem before “The Star Spangled Banner”? While there was no official anthem, Americans sang a tune called “Hail Columbia,” which was written for the inauguration of George Washington. Take a listen below.

When do we hear that last stanza , how many young people have heard it or know it?? If it was displayed all over some would want it taken down.

Key penned the poem as he watched the fight from the Patapsco River, not the Chesapeake Bay, as this story claims.

Hi Lynn, the story states that Key penned his poem during the naval attack which was located on the Chesapeake Bay. We were unaware where the boat was exactly, but thank you for letting us know the exact location.

I knew the story and have seen the very flag in person. What struck me was that last stanza. Now I know where the motto came from!! I never noticed it before but there it is, plain as day! Thank you

Singing the national anthem is one thing. Decifering even the first stanza gives me a visual of what happen during that assault of the fort. Seeing Keys on the ship, scribbling down words, rockets shooting at the fort, cannon fire and then seeing the massive flag flowing in the breeze. Although it was a different flag, Unbeknownst by the Britsh, set sail and left. If you ever go to the harbor in Baltimore, it’s worth a visit.

Wow! Thank you for this information. I never knew the history behind and how the Star Spangled Banner became the National Anthem.

THANK YOU FOR THIS INFORMATION….i WILL BE SHARING IT AS I PLAN FOR THE NATIONAL DAY OF PRAYER IN PERRY GA.

WE ARE BLESSED TO LIVE IN A THE GREATEST COUNTRY ON EARTH. ONE DAY IT WILL BE GREAT AGAIN…

Thanks for posting this information and making us aware of National Anthem Day. It will be more significant for me because I am currently reading a fascinating and well-written biography about Francis Scott Key out loud to my daughter while she works on puzzles. Francis Scott Key: Life and Times was written by Edward Delaplaine and published in 1937. Francis Scott Key was a gifted poet, lawyer, and contributed much to our early government development.

Choose your desired pasta and place one cup (or more, if desired) in zip top bag. Add about 1/4 cup rubbing alcohol and 10 drops of food coloring, eliminate air, seal bag tightly, shake, and lay flat. Allow mixture to fully saturate pasta. The longer it sits, the more defined the color. Carefully remove and place on paper towels atop foil or a cookie sheet (so excess dye does not stain countertops) until dry, preferably overnight. Store in jars or other protective means to prevent breakage.
More hints & tips