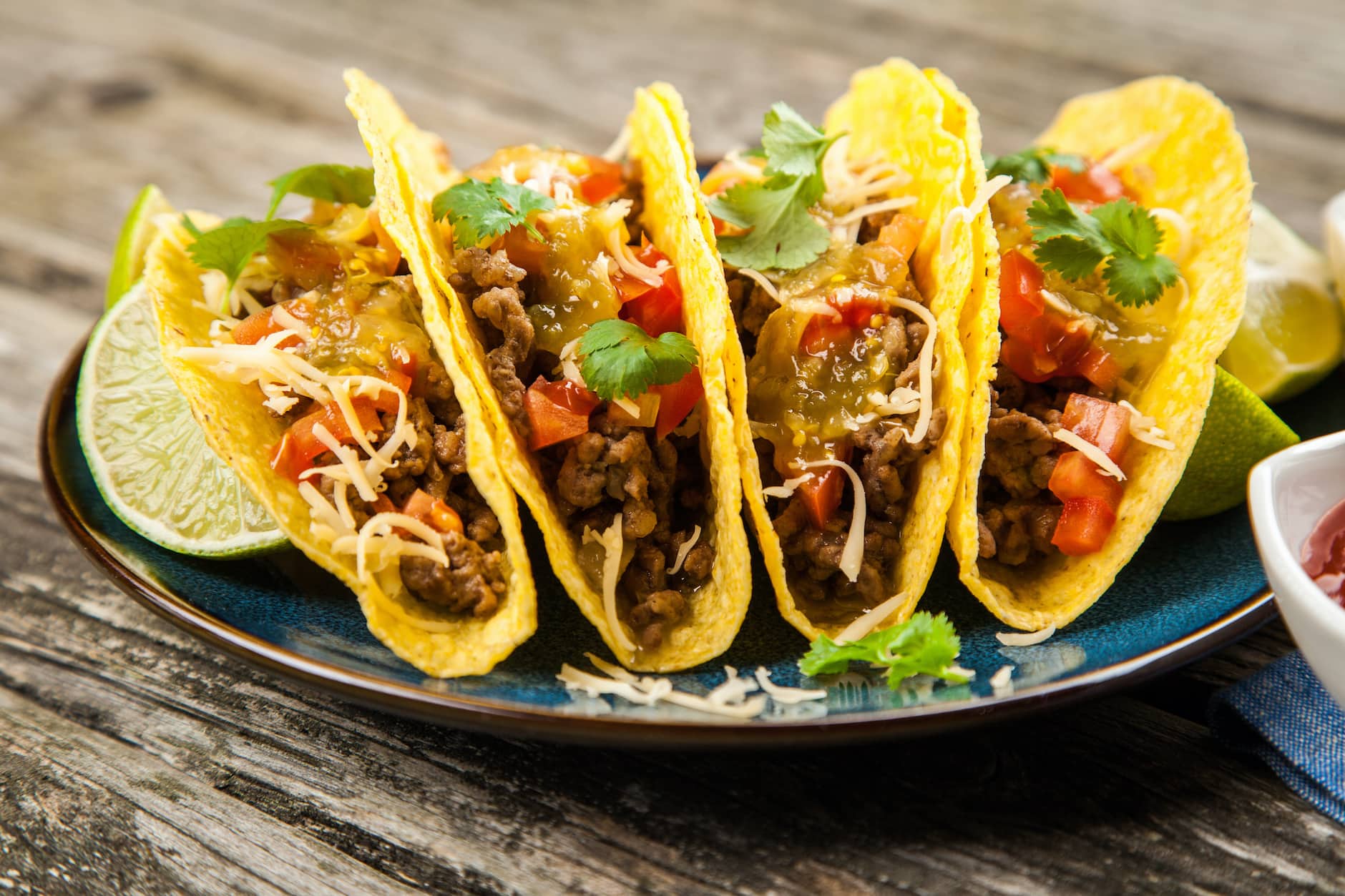 Tacos are one of the most popular foods in the United States. How popular? A recent Harris Poll asked people which food they would want to eat for the rest of their lives. And you guessed it—tacos made it into the Top 5 (#4, after pizza, steak, and burgers). Of course tacos have their own holiday; National Taco Day is celebrated on October 4th each year. And who doesn’t give a nod to Taco Tuesday each week? But how did this simple street food rise in the ranks?

By definition, tacos are corn or flour tortillas rolled around a savory meat filling. No one can say for certain when and where tacos originated but we know that they looked and tasted a bit different from the tacos we know and love today. As early as the 1880s tacos were being sold out of carts by Mexican immigrants who arrived in the southwestern United States and were devoured by Americans who were interested in the new spices and tastes. By 1920, the recipes were adapted to appeal more to the American palate with ingredients like ground beef, chicken, and cheddar cheese.

Over the years, America’s love of tacos grew, and the simple, inexpensive, portable street food became a national obsession. And when home taco kits came on the scene, tacos’ popularity soared.

It may sound surprising but National Taco Day has its roots in a gigantic tamale. The holiday was first invented by Roberto L. Gomez, a San Antonio, Texas city councilor who put together a motorcade to send a 48-pound tamale to President Kennedy for his birthday in 1961 “on behalf of citizens of the United States of Latin heritage,” according to a press release.

Unfortunately, the tamale never made it to Kennedy—it’s assumed that the White House kitchen staff must have eaten it—but Gomez gained a lot of publicity from this stunt. He started sending other tongue-in-cheek gifts to Washington, including a donkey piñata filled with Mexican candy, a giant praline, and finally, a 55-pound taco to President Lyndon B. Johnson in 1964.

All of this led to the birth of the National Taco Council, which was meant to promote San Antonio Mexican restaurants and Mexican pride, with the taco standing as the symbol of Mexican foods. From there, Gomez worked hard to convince the San Antonio government to recognize the days before Cinco de Mayo (May 5) as National Taco Week.

The Rise of Taco Holidays

In 1969, Texas Governor Preston Smith declared the week prior to Cinco de Mayo as Taco Week. By 1974, this expanded to Taco Month, complete with sponsors like the Texas Executive Chefs’ Association and Kraft Foods.

As years went by, new taco holidays popped up—some organized by governments and cultural groups, others by restauranteurs. In 2009, the California-based chain Del Taco declared that October 4th was the “Time to Celebrate National Taco Day!” and other restaurateurs, like San Antonio’s Taco Cabana, threw their support behind the new date.

Our Love of Tacos

Our love of tacos continues to grow, and with good reason. They’re a delicious way to celebrate Mexican culture and heritage, and today’s tacos can be found in almost anywhere—from food trucks to gourmet restaurants— and in infinite varieties, such as fish, beef, pork, chicken, vegan, and more. They’re quite possibly one of the most versatile, delicious, and easy-to-make foods out there.

Want to make your own tacos in celebration of Taco Day and every Taco Tuesday? Here’s a simple recipe for tacos. Feel free to customize it to your liking!

Filling; In Mexico, you’ll find everything from carne asada (sliced beef) to carnitas (shredded pork), fish, or grilled shrimp. Pick your favorite, or you can use our recipe, below.

You’ll also notice that authentic tacos call for soft corn tortillas. That’s because flour tortillas and hard taco shells were more of an Americanized adaptation to the recipes that first popped up. The same is true of shredded lettuce, shredded cheese and sour cream—these are American additions to the original Mexican taco. Corn tortillas should we warmed in a skillet over medium high heat.

Put out bowls of all your toppings and spoon into tortillas. Top with a squeeze of lime and enjoy!

This version is perfect for Whole30 diets and doesn’t contain MSG, sugar, or other additives found in packaged taco seasoning mixes. We promise, it tastes like the “real” thing!

Brown the ground beef or turkey in a large skillet over medium heat, and drain. Reduce heat to low and add spices, water, and tomato paste. Combine thoroughly and simmer until the water has evaporated.

Serve inside your favorite taco shell!