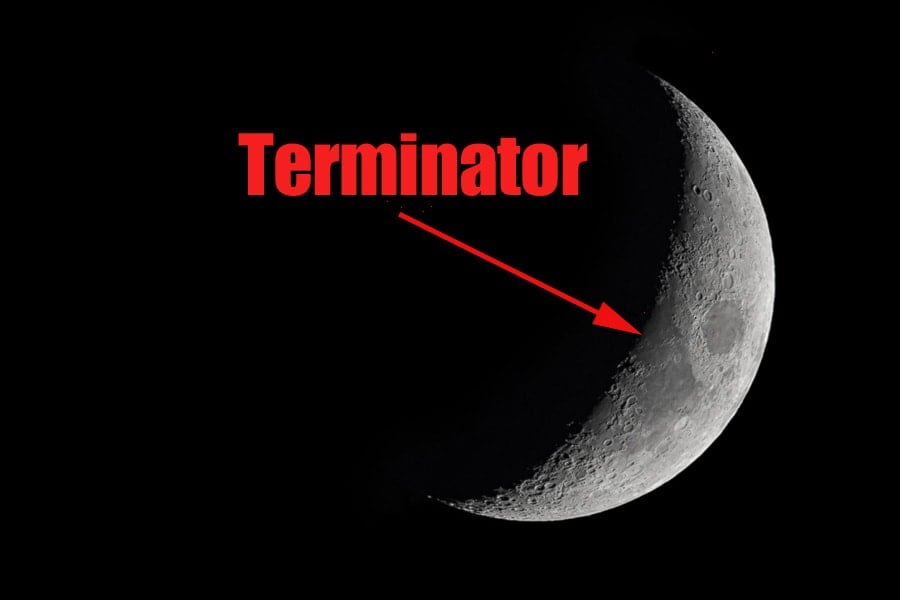 No, this isn’t a story about cyborgs! Have you ever looked up at the waxing or waning Moon and wondered about the line where it separates the visible from invisible? That line, where lunar day meets night, has a name: the terminator (insert corny Arnold Schwarzenegger joke here).

We all know the phases of the Moon are caused by the position of the Moon relative to the Sun. A full Moon occurs when the Sun and Moon are directly across from one another with the Earth in between. Then, about two weeks later, when the Moon passes between the Earth and the Sun, no light falls on the side of the Moon we see, so it disappears from our view. We call this phase a new Moon. At every other angle, the Moon is either waxing or waning, with a fraction of it lit up, and a fraction in the dark.

The Line Where Light Meets Dark

When you look at the Moon’s terminator from a distance, it appears to be a very crisp line. On one side it’s daytime, and on the other, night. The point where one turns into the other is sharp and unambiguous. That sharp line makes sunrises and sunsets on the Moon very different from what we experience on Earth. Sunrises and sunsets on the Moon happen very fast. One moment it’s light out, and the next it’s dark, or vice verse. The whole process takes only a couple of minutes.

On Earth, though, we have periods of time—dawn and dusk—when it’s not quite day and not quite night. Although for each location on Earth there is an exact moment each day when the Sun rises and an exact moment when it sets, our experience is that it takes a while for a day to begin or end. Depending on your latitude, it takes about an hour, give or take, for day to turn to night, or night to turn back into day. And when you look at photos of the Earth’s terminators taken from space, you can actually see that (see photo below).

The reason why the terminators on the Earth and Moon appear so different is actually pretty simple. The Earth has something the Moon doesn’t. Well, the Earth has lots of things the Moon doesn’t, but in this case, the crucial difference is atmosphere. To reach the Earth, the Sun’s light must travel through about 300 miles of atmosphere. Although the air looks clear to us, it is not. The Sun’s light bounces off of each microscopic molecule of gas on the way down to us, getting scattered in the process. It’s this scattering of the Sun’s light that allows us to see some that light prior to sunrise and after sunset each day. The Moon has no atmosphere, so the Sun’s light reaches its surface unhindered.

Whether the transition from day to night or night to day takes a long time or just an instant, though, one thing is certain. Once another day has passed, this terminator will be back.

We live in BC, Canada at a latitude of about 52 o N. When our family visited Malaysia, we were very close to the equator. Regarding sunrise and sunset, there were two things of which we immediately became aware. One, sunrise and sunset were at very definite times each morning and night. These, of course, occurred near 6:00 AM and PM each day. Two, as related to your “Terminator” discussion, they seemed to occur much quicker at 1o N Latitude. For a family with jet lag, this was especially difficult with which to adjust in the morning. Also,we soon realized that once it was 6 PM, we better be where we wanted to be if we didn’t want to traveling in the dark. Cheers, enjoyed your article!

I enjoy reading articles that are worded where I can understand what the writer is trying to say. If I need a dictionary to read it, forget it. I lose interest. Not so with with your article. Not only was I educated today on the ‘”terminator” which I had no clue about, but you made your article very interesting to read. And the small touch of humor helped me to remember what the ‘line’ was called. I didn’t have to go back and scan your article to remember its name. I am new to the Farmers’ Almanac on the internet, but I hope to find other articles that you may have written for them. I am in hopes they will all be just as interesting and understandable as this one is.

Well the upside I guessed the reason for the differen e correctly. Didnt know it was called a ter.in actor line so increased mg knowledge a bit. Just enjoy the he heck out of these articals.

Thank you, Dean, glad you enjoyed it!

Place fresh blueberries in a single layer on a cookie sheet and place in the freezer. After they are frozen, transfer them into an airtight bag or container and place back in the freezer where they will last 6-8 months. For best results, make sure your blueberries are completely dry before freezing. No need to wash them first. Simply rinse before using.
More hints & tips 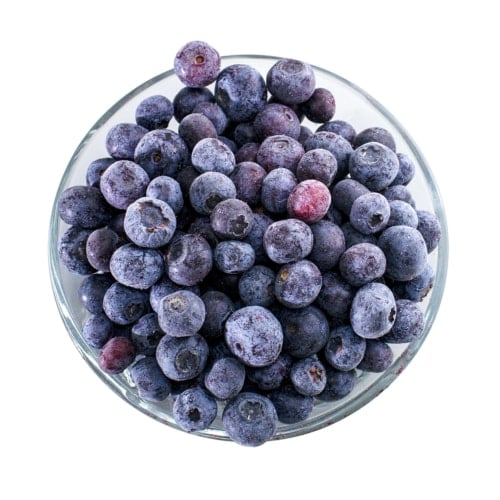