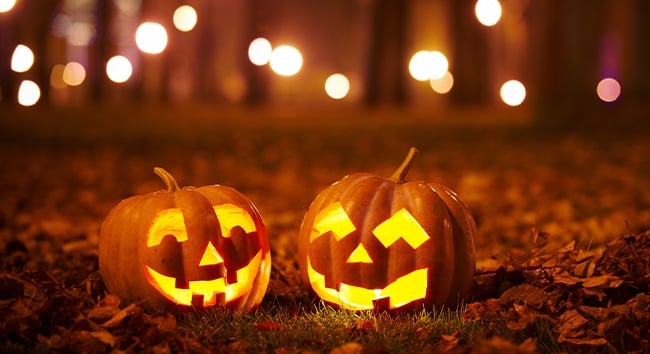 Halloween is Monday, October 31, 2022. All Hallow’s Eve falls on October 31 each year. Ever wondered how trick-or-treating began? Learn about the spooky origins of Halloween traditions. We’ve got some great recipes too! Read on.

October is one of our favorite months here at the Farmers’ Almanac. Apples, pumpkins, colorful leaves, crisp temperatures, and, of course, Halloween. Halloween gets its roots from the ancient Celtic festival of Samhain (a Gaelic word, pronounced saa-wn), which was celebrated over 2,000 years ago. The Celts inhabited areas now known as Ireland, the United Kingdom, and northern France.

Samhain was usually celebrated from October 31 to November 1 to welcome in the harvest and usher in “the dark half of the year.” During this time, it was thought that the ghosts of the dead returned to the world of the living, and in doing so, they could wreak havoc, ruining crops and cause trouble. So villagers dressed up in costumes, usually made of animal skins, to drive the ghosts away. They’d also often set out elaborate banquet tables—a feast served with the hope that the offering would help pacify malevolent spirits. This is where costuming came from, but the first door-to-door traditions were still many years away.

Mumming in the Middle Ages

Approximately 500 years after the beginnings of Samhain, the first traditions that resembled modern trick-or-treating appeared. People were still dressing up in costumes for the holiday, but they dressed as ghosts, demons, and other spooky creatures rather than animals. And, instead of laying out a feast to please angry spirits, these costumed people—the first trick-or-treaters, you could say—started putting on performances.

This new tradition was called mumming, and mummers (the costumed people putting on the performances) would go door to door, singing, dancing, and enacting plays in exchange for food and drink. It is important to note that Samhain (and Halloween, later on) wasn’t the only holiday that had mummers hitting the streets. As time went on, mumming became a tradition for Christmas, Easter, and other holidays, too.

It was during the Middle Ages that Christianity came to England and Ireland. As it became more widespread, its traditions started to blend with the Pagan traditions of the Celtics, and in 1000 A.D., a new holiday was born. The Catholic church created All Souls’ Day, a holiday celebrated on November 2. This new holiday was meant to honor the dead, and it adopted some of the Celtic traditions of Samhain, including masquerades and bonfire celebrations.

In addition to these activities, All Souls’ Day took trick-or-treating a step further. Instead of mumming, the tradition was for poor people to go door-to-door among the homes of wealthy families. Members of the wealthy families would give out soul cakes (small, sweet cakes spiced with cinnamon) and ask that the recipient prays for the souls of the family’s deceased relatives. This new tradition was called souling, and as the years went on, it became an activity not for adults, but for children. Children who went out on All Souls’ Day would go door-to-door asking for treats like money, food, and drink.

Europeans — most likely the Scottish and Irish — brought the traditions of “guising” (disguising) and souling to North America as early as the late 19th Century. By this time, All Souls’ Day had gone through a name change, becoming All-Hallows Eve, and finally, Halloween.

At first, the traditions of souling and ‘guising in the United States were problematic. Youngsters used Halloween as an opportunity to prank people, and those pranks were often destructive, causing expensive property damage. It was right around the Great Depression that these activities became known as trick-or-treating. While Halloween was known as a time when pranksters were rampant, it was also a time for kids to collect treats. Kids would ask, “trick-or-treat?” when they called on homes, giving homeowners a choice. Since no one wanted to be pranked, candy and other sweet treats were handed out. Treats ranged from homemade goodies like popcorn balls and baked goods to peppermints and lemon drops.

From that time onwards, trick-or-treating spread all over the United States. During World War II, trick-or-treating suffered a downturn due to sugar rationing — there just weren’t many treats to give out. But after the War, the tradition came roaring back, and now it’s impossible to imagine a Halloween without flocks of costumed kids going door-to-door looking for candy.

Halloween is full of legends and scary stories. The following are some interesting Halloween superstitions and beliefs:

Watch out for ghosts. The belief is that if a candle’s flame turns blue on Halloween night, a ghost is near!

On Halloween night, nobody is supposed to speak during dinner. If someone does, it is believed to encourage the spirits to come to that table

According to some tales, if, on Halloween night, a girl puts a sprig of rosemary and a silver coin under her pillow, she will see her future husband in a dream.

Where Did Jack O’Lanterns Originate?

According to Irish legend, there was a miserly old drunkard named Jack who, accepted in neither heaven nor hell, was forced to wander the earth with a lump of coal from hell stuck in a turnip to light his way.

Nothing is more unfestive than a sagging, rotting Jack-O-Lantern on your front porch. To be sure your Trick-or-Treaters enjoy your pumpkin artwork through Halloween, we’ve put together some of the best tips to help prolong Jack’s life just a bit longer.

First, try not to carve too early. The pumpkin is a fruit, and once it has been carved, it’s exposed to air and will accelerate the decaying process.

So, wait as long as you can, especially if you live in high-humidity regions.

Additionally, be sure that your pumpkin is fully cleaned of the “guts” and seeds. Scrape the interior walls as thoroughly as possible to remove all stringy material. The cleaner the pumpkin, the slower it will decay.

After you’ve cleaned and carved your pumpkin:

Didn’t get around to carving this year? No worries! Simply use permanent markers or paints to draw right on your pumpkins and gourds—your house number, a Jack-O-Lantern face, ghost face—get creative! Note: after Halloween is over, only give wildlife portions of the pumpkin that are marker-free.

Here are some very punny puns from well-known verbalist Richard Lederer to help scare you into the Halloween spirit!

What do ghosts serve for dessert?
I scream.

What do you get when you drop a pumpkin?
Squash.

What’s a ghost’s favorite snack?
A bagel with scream cheese

Where do baby ghosts go during the day?
Day-scare centers.

Why didn’t the skeleton cross the road?
He didn’t have the guts.

What do you call a chicken that haunts your house?
The poultrygeist.

What happens when you fail to pay your exorcist?
You get repossessed.

Why did the game warden arrest the ghost?
He didn’t have a haunting license.

What do you call a ghost that sits in the picture window of a haunted house?
A window shade.

One witch told another witch, “I want one of those new computers that have a spell checker.”

Don’t bother inviting the Invisible Man to your Halloween party. He won’t show up. Sometimes he makes excuses, but they’re all transparent.

You don’t have to worry about Daylight Saving Time at Halloween. The holiday is always on Green Witch Mean Time.

What kind of monster do you have to look out for at the laundromat?
A wash’n werewolf.

Rain In The Forecast? Try These Halloween Costumes

If you checked our Halloween forecast and the weather is slated to be spooky and wet, we’ve got some rainproof costume ideas to consider.

Let the creepiness begin! Think you know a lot about all things spooky? Test your knowledge with our Halloween quiz!

This just hit my email box. It is NOVEMBER 7, 2022. Why the delay? What is up with that? Where were you all when I needed you? 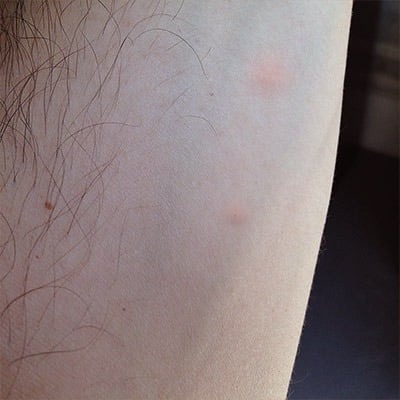