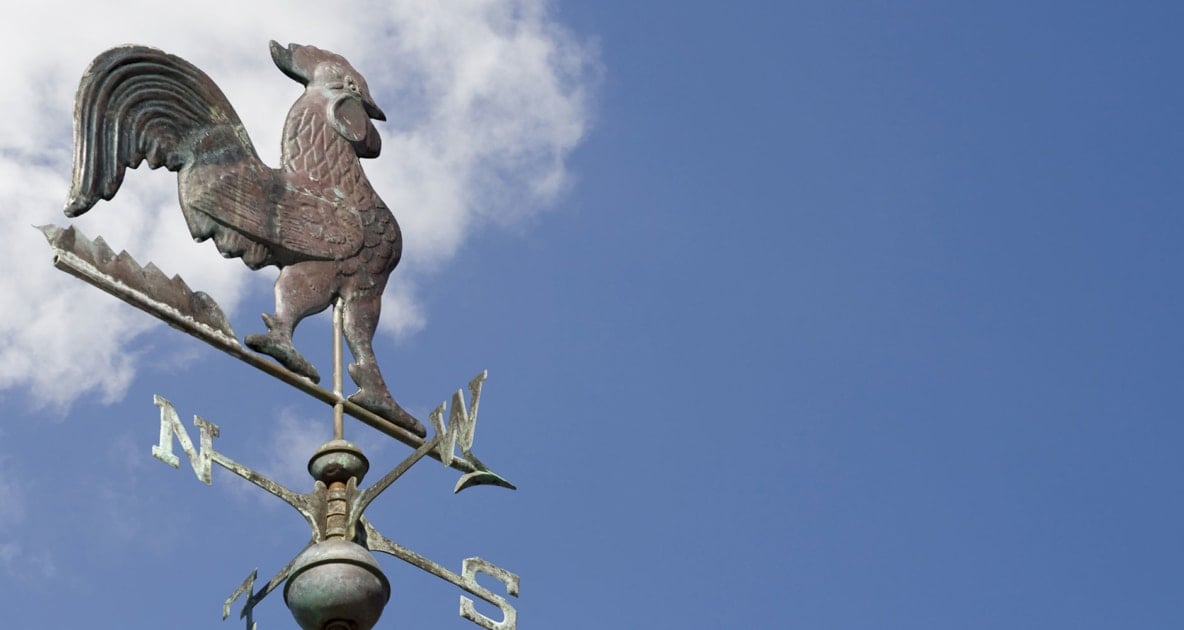 No matter where you live or where you’ve traveled, a weathervane adorned with a rooster, also known as a weathercock, is a common sight — on barns, cupolas, steeples, and rooftops.

But why a rooster? The answer to that question dates back more than a thousand years, perhaps even longer.

Originally, people tied strings or cloth to the tops of buildings so that they could see which way the wind was blowing. Later, banners became a popular ornament, and that’s where we get the “vane” in weathervane; an Old English word that meant “banner” or “flag.”

One of the earliest examples of an actual weathervane — not simply a piece of cloth or a banner — was atop the Tower of the Winds, a First Century B.C. octagonal tower in Athens, Greece that was topped by a bronze wind vane in the shape of Triton, the sea god. This vane was designed so that Triton, who was holding a rod in his hand, would turn so that the rod pointed in the direction of the blowing wind.

Before too long, weathervanes, like the one atop the Tower of the Winds, spread throughout Europe, featuring prominently on top of towers and church steeples. They had a variety of different adornments — often a cross or an image of a patron saint, if the weathervane was on a church or cathedral — but they all served the same purpose, which was to turn and point in the direction of the wind.

St. Peter and the Rooster

To understand how the rooster took over as the favorite weathervane topper, it is important to tell the story of St. Peter after the Last Supper. In the biblical passages describing these events, it was said that Peter would deny Jesus three times “before the rooster crowed.” Because of this, the rooster became known to Christians as the symbol of St. Peter.

Sometime between 590 and 604 A.D., Pope Gregory I, took this a step farther, declaring that the rooster, emblem of St. Peter, was the most suitable symbol for Christianity. It is thought that this declaration led to the first roosters appearing on top of weathervanes.

In the 9th century, Pope Nicholas made the rooster official. His decree was that all churches must display the rooster on their steeples or domes as a symbol of Peter’s betrayal of Jesus. In accordance with the decree, churches started using weathervanes with the rooster.

As centuries went by, the rule about placing roosters atop churches went by the wayside, but roosters stayed on weathervanes. European settlers brought weathervanes wherever they traveled, including to the New World. Nowadays, you’ll find weathervanes — mostly with roosters, but sometimes with other symbols — topping buildings throughout the United States, Europe and elsewhere.

One of the most famous weathervanes in the world also happens to be the oldest weathervane in existence. This would be the Gallo di Ramperto, which is currently housed in Brescia, Italy’s Museo di Santa Giulia. This copper rooster dates back to between 820 and 830 A.D. It once sat atop the San Faustino Church bell tower in Brescia.

So while today weathervanes are mostly ornamental, and we usually rely on our evening meteorologists to tell us the direction of the wind, the iconic weathervane is a true symbol of Americana.

How Do You Read A Weathervane?

The components of a weathervane are the vane, the mast, and the directionals, which display the four points of the compass — North, South, East, and West. The vane usually resembles an arrow shape (with the rooster on top), which rotates freely and points in the direction the wind is coming from while the directionals remain stationary.  So if the rooster and arrow are pointing north, that means the winds are coming from the north, and would be referred to as “a North wind.”

Why do some weathervane have an “O” on it and what is its meaning?

I would think that if the wind was coming from the north the weathervane and rooster would turn to whatever way the wind blows it; but certainly not into the wind.

Living in New England, I always saw the red barn, weather vane roosters…never wondered if they were of an origin …thank you for this article and actually all of them.

Even before we got home (…just did…) from a three week journey to Europe (…long beautiful story as to why…), and hiking through the countryside in Germany where some good friends lived, I asked about the rooster on churches. They had some good explanation…and yours was even better…thank you!!! In France, Switzerland and Germany…the latter where we were for a week with our 98yo hero of a brother-in-law who was in the first landing craft on Normandy on DDay 75 years ago…I noticed that roosters seemed to be more on Protestant churches than any other…is that correct…or what I just paying enough attention? And…keep up your good work in here…….thanx!!!

Thanks, Wes! We appreciate the feedback. Glad you had such a nice adventure!

‘@Keith- Poseidon was the father of Triton. Triton was the messenger of the Sea, which is probably why he was associated with wind/on weather vanes.
The three-pronged weapon you’re thinking of is a typically referred to as a trident. Easy mistake for you to make, trident and Triton being similar words and both associated with Poseidon, but it’s good form to make sure you’re not the one that’s wrong before calling out someone else 😉

I enjoyed the article. Thank you for the interesting information.

Why must everyone take something written for simple pleasure and turn it into a religious criticism. So what lady or man who commented about the Catholics, get a life. And so what who cares if poseidon holds a Triton or if the Triton is stuck up your @$$.

Amber Kanuckel, this is such a well-written, clear, concise, informative, and above all, fun article to read. Thank you so much for the history of weathervanes, the story of the roosters inclusion, and especially the last bit on how to read one. Great stuff, Amber!

I have a pig weathervane. No pigs around here, though.

I have lived many decades and never realized that the weather vane pointed INTO the wind and not the direction it was blowing. Loved the details of this article…thank you.

Rosie: Your theology aside, I’m not sure how one could determine in which way a cross was pointing.

We have a horse ? weathervane on our building!
Love the look! Henry is always riding the wind!

I was once told the horse was used on some, as they always put their butt to the wind, and nose to where it was going. You know it is calm when they stand head to tail so the tail of the other will keep flies away from their face. Weather reports without going outside. Just some old Ozark words.

I had an old copper horse as a vane on my old , pre Civil War farm house .,in PA..now as I am older I think I miss the old vane more than the house …..have down sizes 3 times now

yes we did the same..miss our large home..but time does this..lol..still miss to this day the beauty that it still is.

The origins of the rooster atop churches in the early days of the Catholic church surprised me a bit. However, realizing that Catholics are more interested in placing a rooster instead of a cross bewilders me. Yes, I well understand that Catholics are not always Christians, followers of Christ, rather than saints. Individual Catholics must make the clear choice whether to worship the saints or Christ Jesus, who died for all Christians as well as non-believers to bring them back to God’s grace through salvation.
Sadly, the Catholic popes of the past preferred to remind citizens of the day that the rooster and Peter as a symbol of denial of one’s faith in Jesus and his cowardice to admit that he knew Jesus well. Rather the popes of the ancient times, could have chosen the cross as the symbol of restoration and the bridge of one’s faith through Jesus Christ the Savior of the world, but they didn’t. How disappointing that these religious men failed to remind the residents of their day who visited their churches that important caveat. Nonetheless, I find your research interesting. Thank you so much.

Brescia, Italy is where my Husband’s Niece, Jodi & David`e got married. They now have 4 Beautiful Children. Thanks to FB, Jodi keeps us updated on pics of everyone.

My Husband, our Daughter, his Mother, his Sister-In-Law, her 2 Children, and I flew to Milan. Took the Train to Brescia.
The next day a group of us took the Train to Venice for the day.
The next day as we walked from the Hotel to the Rehearsal Dinner, a Band playing outside, was singing an Elvis song! Of course we had to dance to that! Then on to the Restaurant.
The next day was the Wedding in the Beautiful Church. The weather was perfect for the outside Dinner. Plenty of Wine & Champagne!

I wish we had gone to that Museum where you say the Weathervane is. I have always had an interest in Weathervanes!

The next day we took the Train to Rome.
I have so many wonderful memories of our 10 days of Adventures in Italy!
Maybe it’s time to go back to visit!

Thank You so much for sharing the article about Weathervanes!

So, when you put one up, do you point the compass directions in their proper direction or opposite? I always thought if the arrow pointed North, it meant the wind was blowing toward the north, not from the north. Hence my confusion.

Hi Christina, Not opposite — you position the points on the compass that correspond with what is actually N/S/E/W and that remains FIXED. The arrow and rooster are what move with the wind, telling you the direction.

I always wondered why a rooster
I used to operated a u-fish for years(fish farming) and have a rainbow trout on my wind vane,every body wonders why.

I was raised on a farm in Illinois and we used the rooster on the barn but the one on the house we used the glass ball. The glass ball would burst when lightning hit the metal weathervane. Have a happy thanksgiving and Merry Christmas!

Interesting. You should offer a vane in your store.

I enjoyed the rooster story. In the farming area where I grew up in Nebraska, it was more common to have a horse or cow as the figure, but I love the rooster. 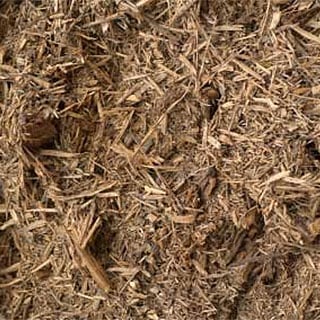