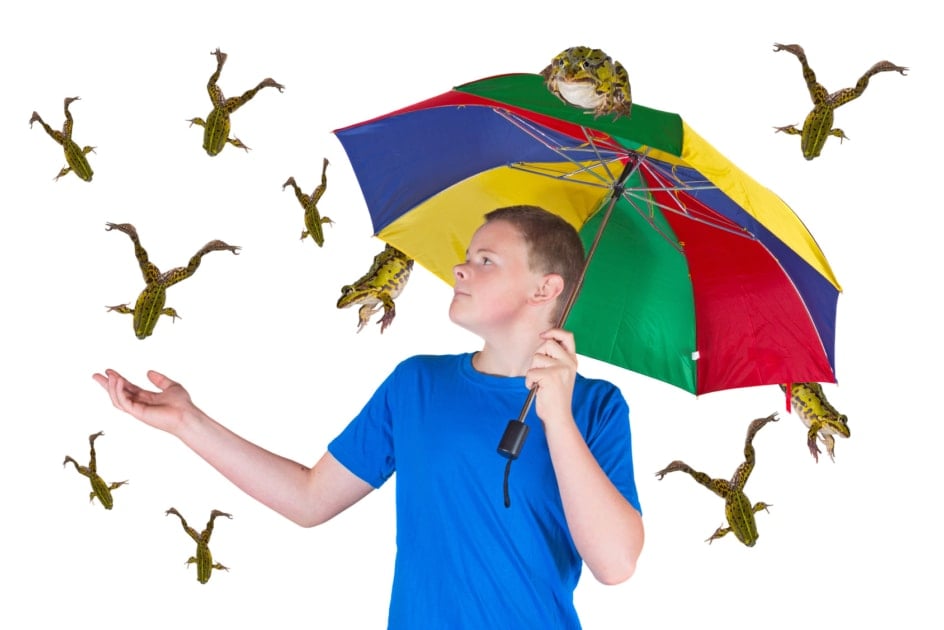 When it rains, it pours, but once in a great while, the things that are actually pouring out of the sky aren’t raindrops. Turns out, the old saying that it’s “raining cats and dogs” isn’t far from the truth.

Around the world, and over the years, many people have reported mysterious rains that boggle the mind and fascinate — everything from animals and reptiles to the simply unidentifiable. At the Farmers’ Almanac, we reported on the story of some mysterious space junk that fell from the sky back in 1962 and the town in Wisconsin that celebrates it.

In many cases, these rains have a scientific explanation; in other cases, the strange showers aren’t related to the weather at all, but are what experts call “non-aqueous rains.” Here are some of history’s most perplexing, and incidents where you might just be glad you stayed indoors!

On a nice, sunny spring day in 1876, a strange thing happened at Allen Crouch’s home in Olympia Springs, Kentucky. Crouch’s wife was outside making soap when chunks of raw meat, some of them more than three inches in diameter, started falling out of the sky all around her. As newspapers reported, two men, whose identities are unknown, tasted the meat and thought that it was either venison or mutton. This grisly mystery went unsolved for months as researchers debated the causes of the meat shower. Finally, one Dr. L.D. Kastenbine came to the most logical conclusion: The meat shower was made up of vulture vomit. Vultures are known to vomit as a way to defend themselves or to make their bodies lighter so that they can fly more easily. Definitely a case of being in the wrong place at the wrong time!

In June 2009, people all around the Ishikawa Prefecture of Japan found fish, frogs, and tadpoles everywhere — on roofs, in fields, in their lawns and more. One resident found that 13 carp had fallen on and around his truck. No one is quite sure where this rain of aquatic creatures came from, but the popular theory is that the fish, frogs, and tadpoles, were sucked up by a waterspout, which are common seasonal occurrences in the area. As the vortex moves over land or water, it sucks the animals up and carries them through the upper atmosphere until they rain down on unsuspecting people below.

Rains of birds aren’t as uncommon as you might think. One recent example happened in Arkansas on New Year’s Eve 2010, when thousands of dead birds rained to the ground. Often, rains of birds are caused by meteorological conditions but other times, bird rains are caused by something much more simple: Loud noises, confusion and head-on collisions. This was the case with the incident in Arkansas. Reportedly, New Year’s Eve fireworks startled the birds into flight. Disoriented, the birds flew into buildings, trees, cars, and more, causing at least 5,000 of them to tragically fall to the ground.

In 2012, Steve Hornsby from Dorset, UK, was surprised to find balls of blue gelatinous material falling to the ground along with hailstones during a hailstorm. Unsure what these one-inch balls of goop were, he collected a few and put them in the refrigerator to keep for further study (but it turned out it wasn’t necessary as they didn’t melt at room temperature). Researchers thought that perhaps the blue goo balls were actually eggs from some kind of aquatic creature and that they had been carried into the sky by birds.

However, later testing revealed that the balls were actually sodium polyacrylate, which is a substance used in things like potting soil or diapers to absorb liquid. The real question about these balls of jelly is how they got to be in Hornsby’s yard. Did they truly fall out of the sky (stranger things have happened!), or did the melting ice from the hailstorm cause existing crystals to rapidly expand? No one knows for sure, and the incident is still under investigation.

Arachnophobes, beware! If the idea of thousands or millions of spiders falling out of the sky is enough to send you for the hills, you might want to sit this one out. Believe it or not, in Australia, spider rains happen quite frequently. This is because of an inventive mode of travel called “ballooning.”

Spiders that are capable of ballooning, climb to the tallest points in a given area, like a tree or a tall shrub, and then spin strands of silk that allow them to be carried off in the breeze. Normally, ballooning isn’t something that we humans notice, but occasionally, because of unusually wet weather or other unfavorable climatic conditions, mass ballooning events occur as millions of spiders take to the skies to move somewhere more desirable. In Australia, this has happened as recently as 2012 and 2015. When these rains occur, residents say that it looks like it’s snowing outside as the spiders drift down and the webs blanket the landscape.  Are you feeling a shiver down your spine after reading that?

Have you ever lived through a strange non-aqueous rain? If so, tell us about it in the comments section below!

It rained little tree frogs here in Jefferson County, MO, summer of 1995. We were on our way home and it just started raining, but not water. We pulled over and just stared, Couldn’t believe our eyes and ears!

Two different times in the 60’s it rained baby frogs

It rained gnats on my sister and I up at her cottage one summer night.

At 13 years old a friend and I were skipping caddying. We were taking the long way around a pond when about ten bread rolls fell from the sky. We looked at each other then looked up only to see nothing in the sky. All of a sudden 100’s of bread rolls began falling. We ran like the wind. Strangest thing to ever happen to both of us.

Used to live near a river and once a tornado left lots of fish in the yard.

I have never discovered anything other than precipitation coming from above but I’m open for anything unusual.

Cindy A, Noticed that myself, also noticed at least one person who thought you don’t have the right to your opinion, right, Theo Moreno? Theo feels entitled to only his opinions.

I was sleeping one night in my top apartment in the building and heard a couple loud bangs coming from the roof of my balcony. In the morning I found on the ground a bunch of heavy aluminum-looking shards and I assume it was space junk. It probably put a hole in the roof because they hit really hard. I saved one of them.

I lived in the high desert of CA and arrived one morning at work to find the parking lot covered in frogs. Weird!

PLEASE! Who decided to leave “Cindy A’s” comments about Obamacare in this thread? C’mon F.A. editor–do your job. Plus, keep these Neanderthals away from the site! Thank you.

Tiny frogs! Just recently, after a thunder storm and heavy rain I went out on our
back porch and found a small frog, about one inch to one and one-half inches long
that could only have been dropped from above as the porch is three feet above
the concrete patio. That had to be quite a ride!

We get all kinds of strange rain here in Florida. Shrimp is the most common. I’m told the brine shrimp are taken into the clouds when the water evaporates, but not sure how that would turn into the juvenile shrimp we see down here after a hard rain. Waterspouts makes more since. We have lots of those also. Also have seen minnows or small fish and tadpoles.

I saw a new article yesterday about a 5 lb catfish falling from the sky and hitting a lady.http://www.cbsnews.com/news/catfish-falls-from-sky-at-philadelphia-park-hitting-woman-in-face/

My husband saw frogs rain down in near Toledo in Perrysburg in the 70s.

He also saw stoned fall from the sky in Cedar Rapids Mich.

I’ve been in several showers of Holy Ghost Rain. Been baptized in Jesus Name, filled with the Holy Ghost and when God starts moving in any Apostolic Pentecost church service the Holy Ghost Rain falls abundantly on those of us who truly Worship and Praise the Lord Almighty, King of Kings, whose Name is Jesus! It can happen in your home or anywhere you pray and exalt Him.

I’ve heard that in Washington D.C. it often rain small to large solid brown, foul smelling chunks, which has after about one week of study by scientists, holding PHDs in BS, have identified the strange rain as Obamacare. It has been known to make perfectly healthy people sick and tired of politicians, not to mention broke, if they are actually caught in one of these “rain storms”.

Debra S
Reply to  Cindy A.

Cindy A one of Trumps despicable deplorable’s ????

Strange gel rain (pinkish clear) fell over Oakville, Washington. The people who handled it said they got sick. Was never identified.

Wow, you two! I’ve never experienced a strange rain myself. I wonder if the shrimp were picked up by a water spout?

I live in the far southern suburbs of Chicago IL. The summer of 1983 a rain shower came through and dropped thousands of small frogs, about 1 inch long. They were hopping everywhere! I was having so much fun chasing and catching frogs that day!

I lived outside Dallas Tx from 1979 to 1983. One summer storm that came up from the gulf left out yard covered in shrimp. It didn’t smell very good for the next couple of days.

A Quick Cure for Motion Sickness 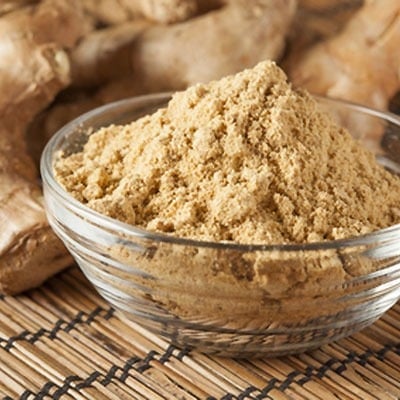