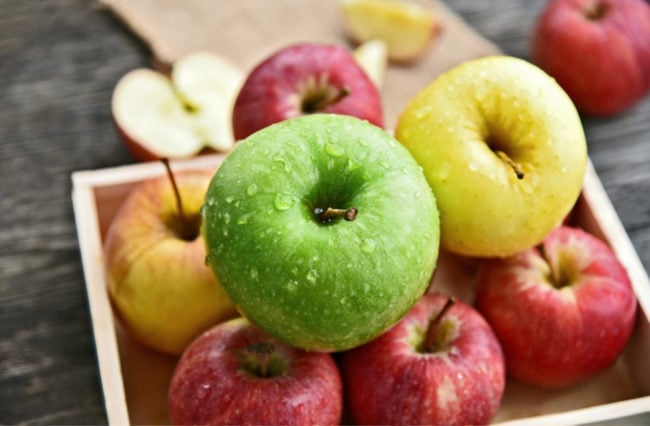 Fall is just about here and that means apple season! Whether you pick your own or buy them from your local orchard or farm stand, fresh, locally produced apples are at their best during the autumn months. There are literally hundreds of different kinds of apples grown throughout North America.

A native apple grown in the Ozarks of Arkansas and Mississippi, Arkansas Blacks have been around since the late 19th century. They get their name from their deep plum-red color that darkens over time, eventually bordering on black. When fresh, Arkansas Black’s are known to have a rather tart, crisp flavor that tends to mellow and soften in storage. They ripen in the fall and have a long shelf life when refrigerated.

A medium to large, red striped fruit with an orange-red blush on a yellow background. Pale, cream-colored flesh is crisp and juicy with a pleasant tart flavor. Harvested in November.

The 1885 New England Farmer wrote, “What the Concord is among grapes, what the Bartlett has been among pears, the Baldwin is among apples.” Discovered in the mid-eighteenth century, the Baldwin apple is one of New England’s oldest and most popular apple varieties. It’s a great pie apple and has been a popular variety with cider makers for over 200 years. It is also an excellent storage apple, due to its thick skin and late harvest in October through November.

The Empire apple derives its namesake from none other than the Empire State itself, New York, where it was first developed and premiered. A medium-sized apple, they are a cross between the popular McIntosh and Red Delicious varieties and are known to be exceptionally crisp, with a juicy, sweet-tart flavor. They are bright red with faint white striations; the top is capped with a light green blush. A great all-around apple, Empire’s excel in providing a refreshing, crunchy addition to any snack, salad, or pie. They also come in smaller sizes which make them healthy and convenient snacks to take on the road or pack into a lunchbox.

A tall, rectangular, medium-sized fruit with yellowish-green skin with an orange-red blush and darker stripes. The crisp, juicy white flesh has a firm texture. Stores well. Harvested during late October.

A medium-sized fruit with yellow skin patterned with bright orange-red. Yellow-white flesh is firm and juicy with a nice texture and a sweet, slightly tart, flavor. Best eaten fresh. Harvested during October.

Red patched mottled over a yellow-green background. The flesh is crisp with a tart, yet sweet, flavor. Keeps well. Harvested from mid-September to October.

Originating in New Zealand in the 1980s, Jazz apples are a hybrid between the Braeburn and Gala apples. These apples are known for their remarkably crunchy-crisp flesh, with a sweet-tangy flavor, that’s not too acidic. The Jazz apple is a great all-around apple due to its balanced taste and structure. They are, however, a club apple, meaning that this varietal is trademarked and can only be grown by specially selected growers, so don’t expect to find them too often outside of grocery chains.

The Jonagold apple from New York is known for its sweet taste and alluring fragrance when baked. A cross between the very sweet Golden Delicious and the more tart Jonathan, Jonagolds are a well-balanced, all-purpose apple. They can be recognized by their yellow coloring from the Golden Delicious, blotched with swathes of red, as well as their generally larger size. Jonagolds are available for about half the year, from October through May.

Similar in size and shape to a McIntosh, but with a darker purplish-red blush and “dots” over a green background. The flesh is firm and aromatic for a good all-purpose apple. Harvested during early to mid-October.

One of the most popular apple varieties, with a deep red color over a green background. The flesh is white, firm, tender, and very juicy, with a mildly tart flavor. Harvested during September.

The Mutsu apple, also known as the Crispin apple, was introduced in the 1930s in the Mutsu Province of Japan. These apples are known for their brilliant, golden peel and rich, honeyed sweetness. The Mutsu is a large apple that works well for sharing. Its sweet flavor makes this fruit a favorite for dessert. The Mutsu is a hybrid between the Golden Delicious and the Indo (another Japanese seedling) but is known to be sweeter than both of its parent varietals. Harvested in the fall, Mutsu apples can safely be stored well into early spring.

Another New England classic and Maine favorite, the Northern Spy was first grown in New York in the early nineteenth century. They can be recognized by their large size and delicate, deep red peel—when grown in the shade. They’re pinker when grown in the sun. The Northern Spy has a honeyed, slightly spiced flavor, making it an excellent choice for baking and cider. These apples ripen early—around mid-to-late September, and store well.

The Paula Red apple is a relatively young varietal. Introduced in the sixties by grower Lewis Arends, Paula Reds were named after Arends’ wife, Pauline. These apples have a sharp, tart flavor, making them a great choice for fresh homemade applesauce. Paula Reds are harvested early in the season, available from late August into October.

An oblong yellow variety overlaid with pink or light red. The flesh is white with a sweet-tart flavor. Stores well. Harvested during September and October.

The Red Spy is what is called a “sport” variety, or a mutation of the parent varietal with many of the same characteristics, aside from some key distinctions. In the case of the Red Spy, it shares most things in common with its parent varietal, the Northern Spy, including its large size and spicy-sweet flavor. The primary difference between the two is that the Red Spy has a richer, more ruby tone, in contrast to the Northern Spy’s lighter, brighter red color. Known for its juicy crunch, the Red Spy is a succulent snack, as well as a refreshing addition to salads or desserts. Available late in the season, it’s best to look for these apples in mid-October.

Originating in Rome, Ohio, the Rome apple is likely the sort of apple you’d imagine seeing on a postcard or illustration. They are usually bright, deep red, and very classically apple-shaped — round and slightly conical. They have a tart, tangy, flavor and are very dense, making them a favorite cooking apple. Rome apples are available in the fall through early winter and last long in storage.

The Winesap has been a beloved apple since the early 1800s, due to its long shelf life and delicious flavor. They have a rich, wine-like taste that goes great in ciders, pies, and sauces. Winesaps can be recognized by their deep red peel speckled with green-yellow hues. They are harvested in the mid-fall and early winter months, making them durable and long-lasting.

Which of these is your favorite? No matter what kind you choose, apples are one of the healthiest and most delicious snacks around. And so versatile! Eat them on their own, dip them in peanut butter or chocolate, bake them in a dessert, pair them with a sharp cheese, or slice them up into a salad. 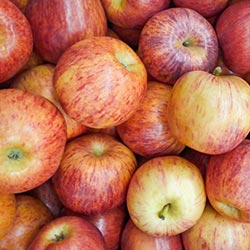 Keyword apple frittata recipe
Tried this recipe?Let us know how it was! 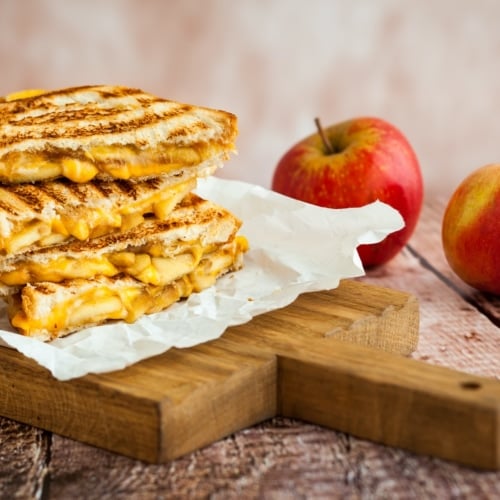 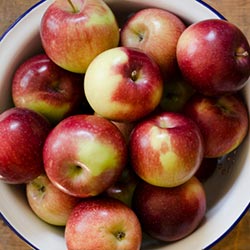 Apple season is upon us. There are literally hundreds of varieties of apples grown throughout North America, but here's a rundown of some of the most popular varieties. Which is your favorite?
5 from 2 votes
Print Recipe Pin Recipe
Cuisine American

What is your favorite kind of apple?

Do you use apples in your cooking? How so?

One year I got Winter Banana apples from a local farm market. I’ve never seen them again, and I *still* want them! So good!

I am so excited to see Arkansas Black on this list. It is difficult to find outside the Ozarks, but my favorite apple of all. The are a large apple with amazing flavor. They work well in baking. If you haven’t tried one, you are missing out!

I so wish these type articles could be printed.

I don’t see the Red Delicious; they are available here in Washington state. I understand they don’t store well.

In NYS the Empire Apple is sought after. Kids love the crunchy texture and sweet-tart taste of Empire apples! Empire apples are ideal for topping salads and eating fresh. They’re also good for pies

Growing up in the 50’s and 60’s the prized apple that came to our home was the Washington State apple with is five knobs on the end of the apple. Where are they now? I haven’t seen them in a very long time.

You left out my two favorites: Stayman Winesap and Northern Spy.

Which apples are best for frying?

Hi Rebecca, you want an apple that will “hold up” during cooking, either early season apples that are tart or Granny Smith work well.

Hey. I offered ways to choose good apples. Seemed relevant. But the post got removed. Why?

Hi Leafpeeper, it got caught in our spam filter, sorry about that. We have retrieved it. Thanks for sharing the info!

Hi Claude! This pick your own site has good details on storage as well as ripening/storage durations for a variety of apple types. http://www.pickyourown.org/Apples_how_to_store_for_the_winter.php

My mother grew up on her family’s apple farm in Michigan. Her tips for choosing the best apples:

1.) Flick it lightly with your fingernail. It should have a high, crisp note. Avoid apples with thudding or lower tones

2.) Turn the apple stem side down. Push lightly on the end bumps. Avoid apples with soft ends. You want the bumps to be firm.

You forgot Granny Smith, and yet the first recipe calls for tart apples!

Tom, Granny Smith are there — under Golden Delicious, sixth on the list!

HI CAROLANN THANK YOU FOR THE TIP.WE LIKE APPLES ANY OLD WAY.GOING TO LOOK FOR A BARREL. HAPPY EATING .TTFN

My parents had a metal drum burried in the ground…in our garage…it had a wooden lid on it…in the fall we put all the apples that we could pick in it….mom made apple pies, apple muffins, apple sauce, alMost all year long….when the barrel was empty, it was a great place for hide and seek!

What is the best way to store apples. I would like to buy a few bushels this apple season but can not fit all of them in the refrigerator. Thank you.

Getting Juice From Lemons

To get the most juice out of fresh lemons, bring them to room temperature and roll them under your palm against the kitchen counter before squeezing.
More hints & tips 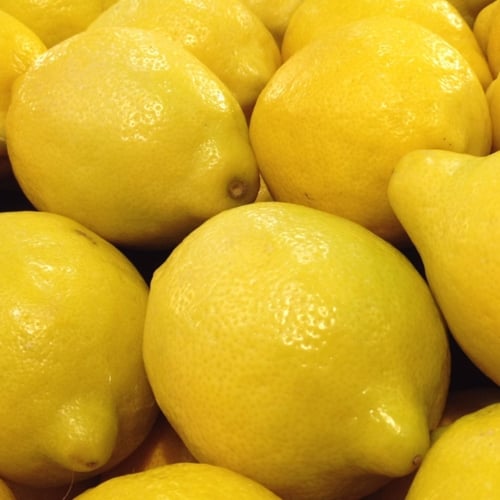