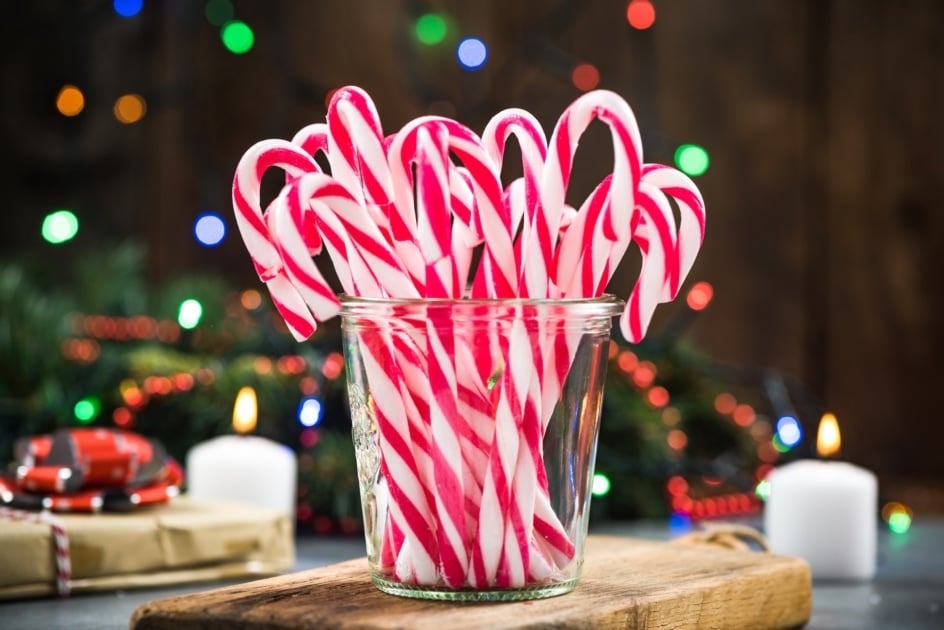 What would Christmas be without candy canes, those sweet, peppermint-flavored, sticks of red and white hard candy deliciousness? But what is their origin, and how did they come to be associated with Christmas?

Origins of the Candy Cane

There are many popular explanations for the origin of candy canes, and all of them sound plausible. Depending on who you ask, you may hear that the canes are meant to be a letter J, for “Jesus,” that the white color stands for purity while the red stripes represent the stripes on Christ’s back when he was beaten before the crucifixion, that the hardness represents the church’s strong foundation, or that the peppermint flavor harkens back to hyssop, a sacred Old Testament herb. While any or all of these meanings can easily be applied to make the candy more meaningful, the truth is actually much simpler.

The Real Story of Candy Canes

Starting in about the 17th Century, when sugar became more widespread thanks to trade with the “New World,” European confectioners began producing hard candy sticks. At that time, anything made with sugar was still considered a treat and mostly reserved for special occasions (such as Christmas). Eventually, parishes began giving the hard candy sticks to children during advent to keep them quiet during service. These versions were bent on end to resemble a shepherd’s crook and, by extension, a bishop’s crosier.

These first “candy canes” were not flavored, but were made from plain sugar. Over time, in countries where Christmas trees were popular, people found that the candy canes made the perfect edible decoration. The crook at the top of them held them in place on the tree’s limbs. Candy canes remained this way — plain white and unflavored — until the first half of the 20th Century when stripes and peppermint flavoring were added.

Today, candy canes can come in many colors and flavors, from traditional peppermint to fruit-flavored, chocolate, and more. The following is a recipe to make your own candy canes at home, plus a few recipes using candy canes: Make Your Own Candy Canes

Keyword candy cane sweets, Make Your Own Candy Canes
Tried this recipe?Let us know how it was! Keyword Candy Cane Fudge
Tried this recipe?Let us know how it was! Why are they all made in Mexico?

I will make the Candy Cane fudge this afternoon for my family to enjoy along with our beautiful Tree, decorations, and gifts to each other to celebrate Winter Solstice and our love for one another 🙂

Many countries celebrate Christmas as Christ’s Birthday. They spend Advent season in preparing their hearts for His coming and they give Him the gifts of their hearts. In these other countries they exchange their gifts on the feast of Epiphany when they also celebrate the arrival of the three Kings with their gifts fot the Christ Child. That is considered the day to exchange gifts with everyone else. This is not a pagan feast. I think this stoy is wonderful and would wish all children were taught this about the candy cane. I wish I had known it when my children were young.

I agree. Most children think it’s all gifts when it’s not

love the candy cane story .everytime i see one i;ll think of Jesus .I’ll be trying the recipe .i love this site

I thank that is a great story to tell kids. And no we dont worship the tree or lights or the dang candy canes. But I know some people might, I guess if they r that dumb let em thank what ever it’s Jesus birthday so let’s have fun and celebrate him 🙂

Yea, they want u to believe all of that nonsense but the candy cane has nothing to do with CHRIST. It’s just another pagan idol like the Xmas tree, the lights, the wreath, the mistletoe, the gifts. Speaking of gifts, why, if it’s Jesus’ birthday does everybody gets gifts but him? If u want to know where Xmas came from, it’s the day chosen to worship the sun god. Pagan, all of it…..

No time left this year, but I’m making candy canes next year for sure! Thank you for interesting information along with the recipes.

Your Food, Recipes, and General Information is of great interest to me most of the time. For example the Candy Canes story was informative. Keep it up

Tiny Holes or Cracks in Windows

Try this as a temporary repair for a tiny hole in a window pane. Fill the hole with a dab of colorless nail polish, allow to dry and build up layers until the hole is completely closed.
More hints & tips