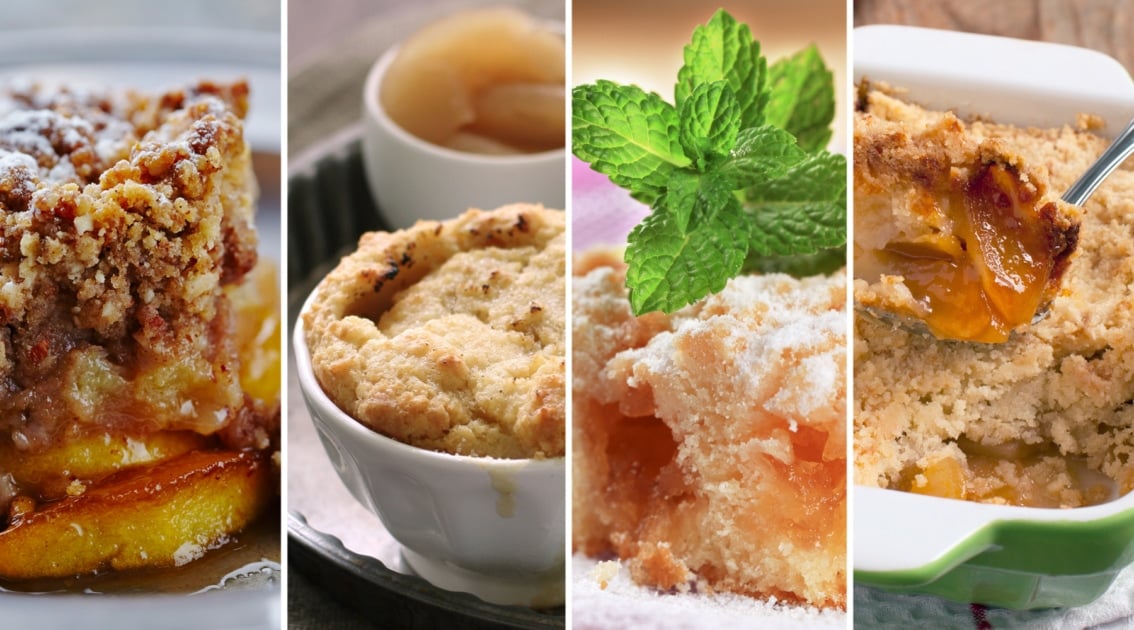 When it comes to baked fruit-and-pastry desserts, the classic pie isn’t the only game in town. These yummy concoctions are a favorite any time of the year. They work with whatever fruit is in season (and fall means apples!), in any shape pan, but they go by many names, so it can get confusing.

Here’s a refresher course on what to call the most common baked fruit desserts. So if Aunt Susie tells you to bring an Apple Betty to the next pot luck supper, you’ll know exactly what she’s talking about. While there are regional differences in how these desserts are named, we provide a general description of each.

Crisp, Crumble, Betty, Or Buckle: Which Is Which?

Crisp: A crisp is fruit dessert with a topping made of a combination of oats, flour, butter, and sugar (and sometimes nuts). The topping completely covers the fruit and is baked. It is also sometimes called a crumble. But as you’ll see below, a crumble usually doesn’t contain oats.

Crumble: Crumbles are very similar to crisps, but the name originated in England. Both contain fresh fruit and are covered with a streusel topping that gets baked. Crumble toppings, however, usually do not contain oats, whereas crisp toppings do.

Cobbler: Cobblers are a fruit dessert baked with biscuit-style topping. It’s called a cobbler because its top crust is not smooth like a pie crust but rather “cobbled” and coarse. It’s usually dropped or spooned over the fruit, then baked.

Betty: A Betty (as in “Apple Brown Betty”) is similar to a crisp, but has no oats in its buttery crumb topping. And rather than having the topping solely on top of the fruit, it’s layered throughout, then baked. 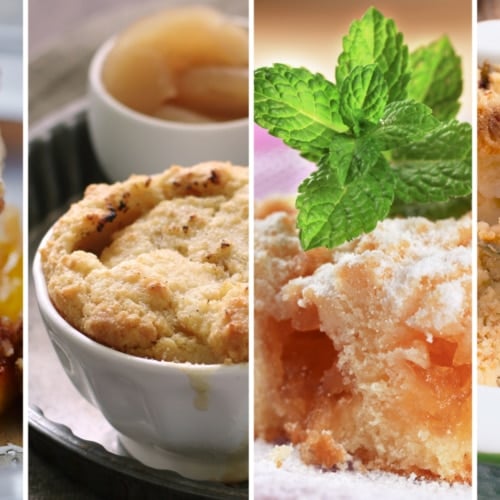 Keyword Crisp, Crumble, Betty, Or Buckle
Tried this recipe?Let us know how it was!

It just so happens that October 5th is National Apple Betty Day, so enjoy this classic recipe that’s so easy to make with your fall apples.

Hi MMM, that was a new one for us! We’ll have to add that to our list!

I have a recipe I have been using for many years, it is titleded an Apple Crisp, but after reading your page, I see it is the Apple Betty that I have been making. Everyone who has eaten it, loves it, so I keep on making it anytime.
Thanks for giving everyone the proper names for these desserts. I have The Food Lover’s Companion book, and it does not have all those names listed. It is good to have the proper name for each dessert, so when someone is talking about it, we can know which dessert they are refering to.

I’m reading this randomly, because of King of the Hill (Peggy’s apple Brown Betty), EXACTLY one year after it was posted….on National Brown Betty day…how is this possible?

After reading your description of each, I think I could love them all.

You should add kuchen to this, basically a sweet pancake batter with fruit on top that swells up as it bakes to partially cover the fruit. It’s the easiest one to make.

I love the oats in crisps! I also prefer the texture to cobblers.

All the above. I do not care for pies, because of the crust. Cake is just OK.
My Mother-in-law made a apple dessert with cored apples, rasins and cinn sugar wrapped in a pie dough. I thought that was a Apple Betty
The buckel recipe I have is like a thick batter and the fruit goes in the middle. As it cooks, it rises up and over the edge of the fruit. No Strussel topping.

There’s another variation on these, that uses either buttered toast or buttered bread to line the pan, which you fill with fruit. I don’t remember if it had a topping or not, or where I found it, but I think it was in Fannie Farmer’s Settlement Cookbook.

Cobbler because I like the crust. Crisp with Vanilla Ice Cream or Warm Half & Half. Think I’ll make some today because my mouth is watering.

Break an egg? Pour salt all over it, wait ten minutes, then sweep up easily.
More hints & tips