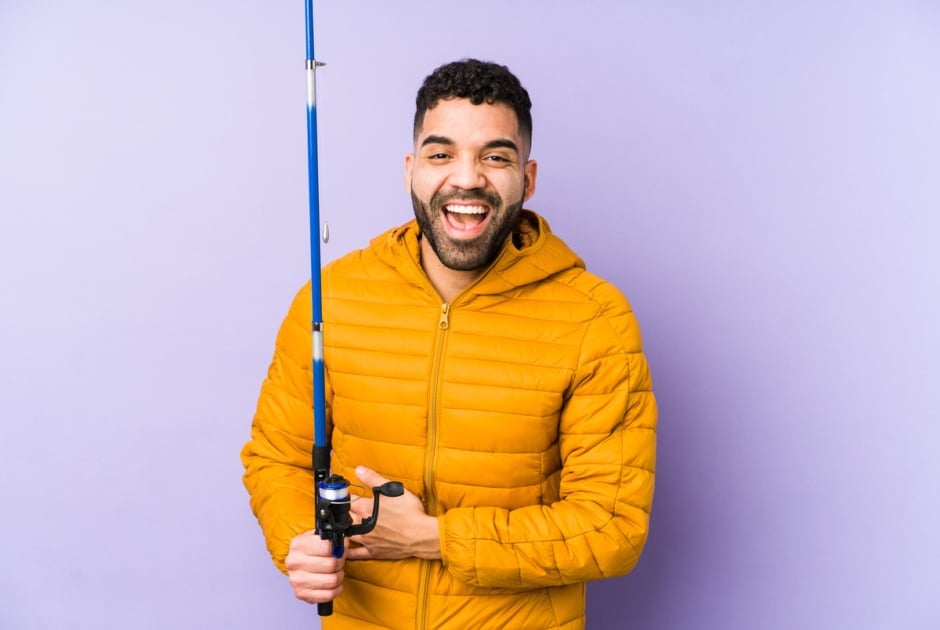 Fishing and tall tales seem to go hand-in-hand. We’ve all heard about the “big one that got away” and other exaggerated stories. There’s another angle—pun intended—to them: the bait used to catch the fish can be just as funny and hard to believe. So we did a little digging, not for worms, but for some of the strange but real things people have used for bait. Check out this list!

When it’s time to go fishing, you may pack these candies as a snack. But, bring enough for the fish too. Fish go for bright, colorful lures. Gummy candies look like artificial worms or minnows.

Here’s another snack you can easily share with the fish. Trout, bluegill, and sunfish are known to take marshmallow bait. Use mini or regular marshmallows depending on the size fish you want to catch. Any leftovers can go to making s’mores!

Grandma’s homemade lye soap has been used for centuries for bathing, laundry, and . . . to catch fish? It’s true! It seems that catfish bite pure bar soap. If you don’t have lye soap on hand, no problem. You can catch catfish by using small chunks of “pure” bar soap, such as Ivory or pink Zote laundry soap bar. Catfish apparently love the beef tallow fat in Zote.

If you fish for carp or catfish often, you’ve probably run across numerous ways of making bait balls. No need to use a complicated recipe. Simply mix peanut butter with cornmeal or pieces of sliced bread. Shape into balls to fit your fishing hook.

Cut a pack of the cheapest hot dogs you can find into chunks when fishing for bluegills, catfish, crappie, or bass. Hot dogs are easier to use than nightcrawlers or crickets. And if the fish aren’t biting, you can always eat the bait.

Chew a nice wad of bubble gum for a few minutes, until its soft enough to ball up, and bait your hook. We’re not sure exactly why fish are attracted to chewed bubble gum, but freshwater and saltwater anglers report catching red fish, bass, and catfish with it. Fruit flavors seem to be a favorite.

Cats love dog food . . . catfish, that is! Simply slide a small chunk of meat onto your fishing hook and voila, it’s baited and ready. You can pour a little of the gravy into the water as chum. It’ll lure catfish to your fishing spot and help them find your baited hook faster.

Fish and zucchini? Sounds like a yummy recipe! But those garden cukes and zukes make great bait. One gardener who also loves to fish shares one of her favorite fishing tips with us: Cut the vegetable in half, so the flesh is exposed. Then cut into chunks and use a small treble fishing hook. She uses this method often to catch carp and catfish.

Turns out, some anglers took a challenge to see if they could catch fish with a shoelace, and surprise, surprise! They did. The proof is in their Youtube videos. Ladyfish and bass were caught with a a piece of shoelace hooked right into a fishing hook. We wish we could say you can catch “sole” with this technique, but the truth is, it’s just a corny joke!

As this list proves, anglers are known to experiment. Seeing fish gobbling up berries that fall from bushes hanging over the water, they tried dried fruit as bait. They found that golden raisins are especially scrumptious to a variety of fish. When the raisin hits the water, it swells and gives off a fermented scent, more so in warm weather, attracting lots of fish. Serious anglers use the small fish they hook with raisins as bait to catch large catfish.

This canned meat product by Hormel hit the market in 1937 and became quite popular as an important food ration during World War II. SPAM contains oils that certain fish, like large blue, channel, and flathead catfish find irresistible. Charles Ashley Jr., an Arkansas angler, let the world in on his fishing secret in 2001 when he broke state and world fishing records using SPAM as the bait to catch a 116-pound blue catfish in the Mississippi River. Cut SPAM into cubes and press onto a treble hook.

You’ll find this fishing bait where craft supplies are sold. You can make your own yarn balls like die-hard anglers do, (there are DIY tutorials on YouTube), but it’s not a quick process. Ready-made pom poms are a much easier choice. Opt for a bag of colorful mini, fuzzy cotton (or other fabric) pom poms. To doubly attract fish to the colorful bait, soak them in fish sauce for a few hours first. Place pom poms in a zipper-top bag with liquid fish sauce (you’ll find it in the Asian food aisle at your supermarket). Catfish are especially fond of pom poms marinated in fish sauce.

Pick The Best Day To Fish!

Wondering when it’s the best day to cast your line? Our Best Days To Fish calendar rates the conditions for each day and includes an interactive map so you can find a fishing or boating location near you. It also lets you search for bodies of water by species of fish!

What was the oddest thing you’ve ever used as fishing bait and did it work? Tell us in the comments below.

Guide to Free Days To Fish by State

Oh thanks for the tip! We’ll have to give that a try!

I know the bubble gum works. My oldest did it as a joke & out fished his dad. He was 12 at the time.

I found some turkey liver in one store works for and even caught a couple of walleye, stays on the hook with no problems

The oddest thing I’ve used to date was FATBACK ! It stays on ur hook very well..and have caught several good bass on it!

My grandfather used fried cheese for bait. The fish loved it!

We have fished of the breakwater in Redondo Beach Ca with a new shiny triple hook and caught many ocean fish. No bait at all.

WELL IVE USED USED CHICKEN LIVERS, SPAM CUT TO DICE SIZE, DOUGH BALL MADE WITH CORN MEAL AND FLAVOERED WITH VANILLA DROP IN BOILING WATER AFTER YOU FORM THEM INTO BALLS ROUND BALLS FOR A FEW SECONDS ,ALSO WHEATES JUST ADD WATER VANILLA AND FORM BALL SIZE SQUEEZE OUT EXCESS WATES TILL FIRM THEN PINCH INTO SMALL SIZE YOU NEED FOR BAIT TAKES A WHILE TO LEARN HOW TO MAKE BUT WORTH IT, CAUGHT CARP CAT FISH

As crazy as it sounds. I have had good results using red or black licorice. I have used a strip of banana peel at times.
I have caught bass & cat on all three.

I used a hook just a hook. My friend dared me to just use a hook when fishing for sunfish and in 20 minutes I caught a fish. also the article is posted on my birthday.

Excellent article. Now I want to try some new ways to catch a fish!!