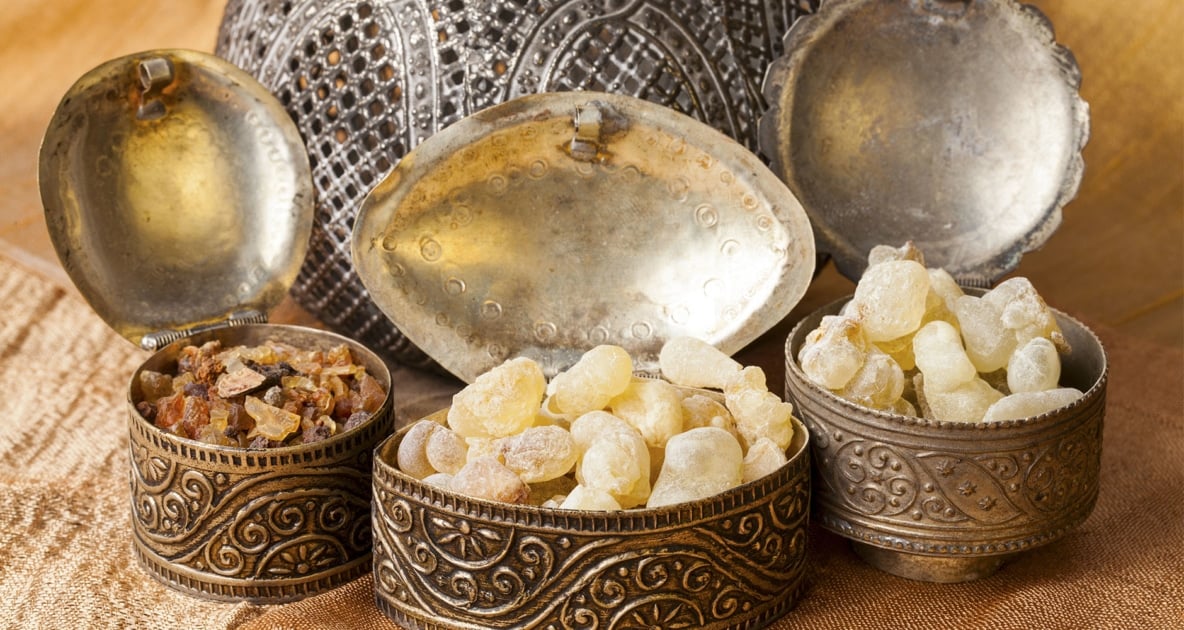 If you’ve ever heard of frankincense and myrrh, it’s most likely because they are known historically as the precious gifts presented to the Baby Jesus by the Three Wise Men, along with gold. According to Matthew, 2:11:

And when they were come into the house, they saw the young child with Mary his mother, and fell down, and worshipped him: and when they had opened their treasures, they presented unto him gifts; gold, and frankincense, and myrrh.

But have you ever wondered why the Wise Men chose these items as gifts? What are they, and are they really that valuable?

What Are Frankincense and Myrrh?

Both frankincense and myrrh were valuable commodities that were exported by camel caravans throughout the known world. Only royalty or the wealthy could afford either, making them a fitting gift for the King of Kings. These costly commodities were used not only by the ancient Hebrews but by the Egyptians and Romans as well. Both were used in embalming and burned as incense for fragrance, purification, and in religious rites.

Frankincense was used as medicine—the resin was chewed for digestive issues. Ancient Egyptian queens and pharaohs used frankincense and myrrh topically for skincare and rejuvenation, in cosmetics and facial masks. The dark eyeliner that Egyptian royalty wore thickly around their eyes, referred to as kohl, was made from charred powder from burned frankincense resin.

Both are derived from the resin of trees. Myrrh comes from an Arabian tree known as Balsamodendron myrrh. And frankincense is derived from the Boswellia trees. It became known as frank + incense because of the prominent odor and steady, long-lasting flame it gives when burned. To extract frankincense and myrrh, incisions are made in the tree bark, and the sap that oozes from the cuts hardens into beads of resin. The resin is harvested and used in a variety of applications.

How Are Frankincense and Myrrh Used Today?

Fortunately, we don’t need camel caravans to deliver these beneficial resins and oils. Frankincense and myrrh are typically sold by herbal companies as essential oils, resin, and powders. They can be burned and compounded and used to make incense, perfume, and medicinal tinctures.

Frankincense essential oil can be diffused to relieve respiratory issues such as colds and asthma, or for its relaxing, focus enhancing aroma. Added to salves or carrier oils, it is used to treat dry skin and enhance the healing of skin abrasions. A drop of frankincense essential oil can be taken daily in a spoon of honey, coconut oil or in a glass of water to boost the immune system. Current research on frankincense and other essential oils are revealing promising findings.  Certain species of frankincense have been found to aid digestion, effectively treat asthma, arthritis, ulcerative colitis, kill cancer cells and prevent the growth of tumors.  In clinical trials, it was reported to reduce cerebral swelling in brain cancer patients.

Myrrh essential oil can be diffused to relieve respiratory issues, soothe mucous membranes or to enhance focusing and centering. Myrrh is used in various cosmetic and skincare applications to promote healthy, youthful skin. Myrrh is valued for promoting oral health and is used in mouthwash, throat lozenges, and toothpaste. It is used to relieve sore throats, toothache, mouth ulcers, and is an effective breath freshener. A drop of myrrh essential oil can be taken orally in a spoon of honey, coconut oil, or in a glass of water to bolster the immune system and protect your body from infection. Myrrh has many beneficial properties: antioxidant, antiviral, anti-fungal, anti-inflammatory, and is an expectorant. In recent studies, myrrh was found to effectively kill breast and skin cancer cells.

Use only 100% pure therapeutic grade essential oils that are derived from plant sources instead of fragrance oils that may contain synthetic chemicals.

The author couldn’t bear to mention that Frankincense and Myrrh are ARABIAN substances native to the ARABIAN peninsula.

Where can I purchase both?

Hi Dee, you can purchase on Amazon and Etsy.

any new age/religious shop should have both, and many co-op type stores (think those places that are often high priced and carry organic everything) will also likely have them if well stocked.

You can buy small charcoal discs that will fit in a small incense burner. Put the resin chunks right on the burning disk. Soon it will smell devine

The “Wise Men” were actually astrologers. They actually worshiped false gods. King Herod summoned them to him first because he wanted to know where God’s son, Jesus was born. He wanted to kill Jesus. The Astrologers followed the “star” to Jesus but as Matthew 2:12 says: “However because they were given divine warning in a dream not to return to Herod they departed for their country by another way”. God intervened and did not allow Herod to exactly where Jesus was.

I actually buy frankincense salve at Walgreens to use on my feet to help with pain.

Really? I have bad Plantar Facialis and my feet hurt constantly hurt. Do you soak your feet in it?

Melissa, do the e-cises from Pete Egoscue.

Contrary to popular belief, the “wisemen” or better translated astrologers. So they would have looked to the stars for guidance instead of God. Notice, Herod ordered young boys 2 years and up to be killed. On the contrary, God’s angels informed lowly shepherds of the birth and location of Jesus. So they visited the infant, ,not the Magi.

I have Frankensense and Myrrh resins sent to me back in the late ’90’s early 2000’s…….by a friend I end from Saudi Arabia……they haven’t deteriorated at all as far as I can tell. I use them on lighted coals for insence…..the fragrance is just beautiful.

The Three wise men brought Jesus those gifts because they KNEW He was the King of Kings and He would one day die on the cross for our salvation!

I also ask the shelf life of tincture of myrrh

Kohl type eyeliners have been common, at least in black color. Avon products might still be selling Kohl eyeliners, but then, most cosmetic lines in retail stores could be selling black kohl eyeliners. Read labels, as most brands would boast the “kohl” ingredient if included.

Wonderful research for this article. I enjoyed the unique background info. Now can anyone help me find that kohl eyeliner made from frankincense. That has to available some where. Thank you. Many Blessings.

Modern day research is finding that Frankincense is a powerhouse of medicinal properties when distilled in the correct manner. In one of the articles I read which was interesting that the people where the frankincense tree grows chew the resin and they have no dental cavities Myrrh has a lot of astringent properties as well.

are they related to acacia seyal & acacia senegal?

i have purchased & used homemade soaps that had frankincense & myrrh in them and the smell was incredible!!! Perfect blend!

I have some given to me in a little ball brought back from a trip to The Holy Land by a relative. I’ve had it for years and I hang it on my Christmas tree each year. It’s very lovely ornament!. 🙂

I was wondering what the shelf life is on the resin?

Shelf life on these resins

Great Article thanks for the information!

Great article! It shows that you did your homework. 🙂 Thanks for all the good information!

Interesting article. I never knew exactly what they were, nor had I ever seen a picture of what they look like. Great job, and thank you so much.

I’ve bought candles that have frankincense and myrrh essential oils in them from http://www.biblewickcandles.com before…pretty cool!

Nice job! I never knew what they were. Thank you

That was an excellent & informational article! Thank you!☺