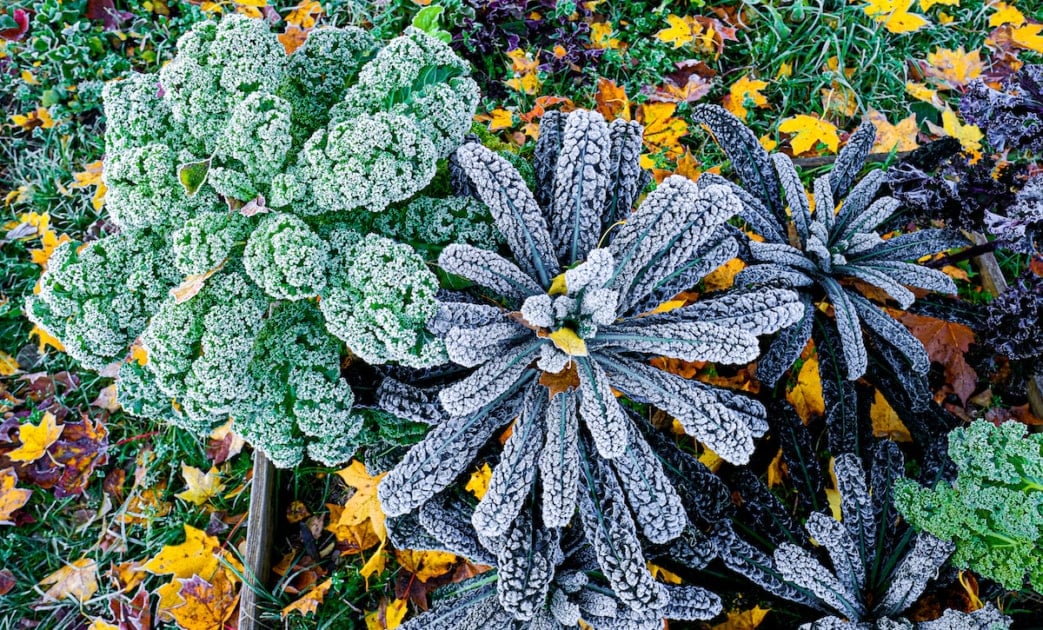 Here’s a guide to frost and how you can protect your plants.

FROST: Damage depends upon the length of frost duration.

Frost (also called white or hoarfrost) occurs when air temperatures dip below 32°F and ice crystals form on plant leaves, injuring, and sometimes killing, tender plants. Clear, calm skies and falling afternoon temperatures are usually the perfect conditions for frost. If the temperatures are falling fast under clear, windy skies-especially when the wind is out of the northwest-it may indicate the approach of a mass of polar air and a hard freeze. A hard or killing frost is based on movements of large, cold air masses. The result is below-freezing temperatures that generally kill all but the most cold-tolerant plants.

Cloudy skies: you may be in luck

If the temperature is cool, but clouds are visible, your plants may be protected. During the day, the sun’s radiant heat warms the earth. After the sun sets, the heat radiates upward, which lowers the temperatures at or near the ground. However, if the night sky has clouds, these clouds will trap the heat and keep the warmer temperatures lower, closer to your plants, preventing a frost.

Wind also influences frost. If the air is still and windless, the coldest air settles to the ground. The temperature at plant level may be freezing, even though at eye level it isn’t. A gentle breeze, however, will prevent the cold air from settling and keep temperatures higher, protecting your plants. If the wind itself is below freezing, frost may be very damaging.

Humidity and moisture are good things when talking frost. When moisture condenses out of humid air, it releases enough heat to sometimes save your plants. When the air is dry, the moisture in the soil will evaporate. Evaporation requires heat, which removes warmth that could save your vegetables.

The location of your garden can have a tremendous influence on whether or not an early frost could wipe out your garden, but leave your neighbor’s alone. As a general rule, the temperature drops 3°F to 5°F with every 1,000-foot increase in altitude. The higher your garden, the colder the average air temperature, and the more likely your plants will be hit by an early freeze.

However, lower isn’t always better. Cold air is heavier than warm air and tends to sink to the lowest areas, causing frost damage. The best location for an annual garden is on a gentle, south-facing slope that’s well heated by the late-afternoon sun and protected from blustery north winds. A garden surrounded by buildings or trees or one near a body of water is also less likely to become frost-covered.

The type of soil your garden is growing in also affects the amount of moisture it holds. Deep, loose, heavy, fertile soil releases more moisture into the surrounding air than thin, sandy, or nutrient-poor soil. The more humid the air is, the higher the dew point will be, and the less likely that frost will form on those plants. Heavily mulched plants are more likely to become frosted since the mulch prevents moisture and heat from escaping out of the soil and warming the surrounding air.

The plant itself determines its likelihood of frost damage. Immature plants still sporting new growth into the fall are most susceptible-especially the new growth. Frost tolerance tends to be higher in plants with maroon or bronze leaves because such leaves absorb and retain heat. Downy- or hairy-leaved plants also retain heat. Compact plants expose a smaller proportion of their leaves to cold and drying winds. By the same token, closely spaced plants protect each other.

Frost on its way?

If a frost is predicted, cover your plants, both to retain as much soil heat and moisture as possible and to protect them against strong winds, which can hasten drying and cooling. You can use newspapers, baskets, tarps, straw, and other materials to cover your plants. Cover the whole plant before sunset to trap any remaining heat. Be sure to anchor lightweight coverings to prevent them from blowing away.

Keep the soil moist by watering your plants the day a frost is predicted. Commercial fruit and vegetable growers leave sprinklers on all night to cover plants with water. As the water freezes, it releases heat, protecting the plants, even though they’re covered by ice. To prevent damage, the sprinklers need to run continuously as long as temperatures remain below freezing.

When is the average date for frost in your area? Check out our Average Frost Dates.

Golden Isles Ga rarely drops below 75% humidity. When temps drop below 32 it’s only 1 hour then temp will quickly climb back above 40. I always take all of my 36 succulent plants inside. I’m wondering if this is necessary?
Or perhaps place on porch up against house?

Enjoyed article , I learned a lot?

Thank you for that very helpful information! This is my first year for gardening, and of course my first fall garden. My pole beans aren’t looking good, so even though the low is forecasted at 36, think I’ll give them a little TLC and throw a cover over them. Do you think this is a waste of time?
Janice, zone 9b, Visalia, CA

You should be fine but maybe look into why your beans aren’t happy.

No room to dry things flat?

Use the bathtub! Place a thick towel on the tub bottom, lay your hand washables on it, and close the shower curtain. No one will see your laundry.
More hints & tips