Fall is a great time to be outside, even after the Sun goes down. Be sure to check out our list of celestial events you’ll be able to see during the month of October, including the full Hunter’s Moon and stunning planetary lineups. Bookmark this page and refer to it all month long!

Take note that we sometimes will use angular degrees to define the separation between two objects, such as (for example) a bright planet and the Moon. Keep in mind that the width of your clenched fist, held at arm’s length, measures roughly 10°. When we speak of magnitude, we are referring to the brightness of an object, the lower the figure of magnitude, the brighter the object. The brightest stars are zero and first magnitude. Under a dark, clear sky, the faintest objects that you can see with just your eyes are fifth or sixth magnitude. Objects with negative magnitudes are the brightest. Sirius, the brightest star, is -1.4. Venus can get as bright as -4.8. A full Moon is -12.7 and the Sun is a blindingly bright -26.7.

October 6 —New Moon at 7:05 a.m. In this phase, the Moon is not illuminated by direct sunlight and is completely invisible to the naked eye.

October 8—Mars is in solar conjunction today, behind the Sun’s glare and invisible all of this month.

October 9—Mercury passes inferior conjunction today, then rapidly enters the morning sky. This little hummingbird of a planet levitates quickly up into its best dawn apparition of the year for mid-northern latitudes. By the 17th, having brightened to 1st-magnitude, it will rise just in the southeast, more than an hour before the Sun.

October 9—Soon after sunset this evening, look low toward the southwest during evening twilight to catch a view of the 3½-day-old waxing crescent Moon hovering just a couple of degrees above and slightly to the left of Venus, the brightest planet. Using binoculars and wide-field telescopes will also show the 2nd-magnitude star Delta (δ) Scorpii, also called Dschubba, a mere ¾° above Venus. Ever since late last spring, Venus has remained at about the same low altitude in the dusk (for viewers at mid-northern latitudes). But during October it climbs just a bit higher, and now stays above the horizon until twilight is well over. The interval between sunset and Venus-set grows significantly during October—from about 1¾ to 2½ hours. It will be highest and best in late November and early December.

October 10—Saturn is the bright yellow “star” in the south during the early evening. It lies on the western side of the dim, boat-shaped pattern of Capricornus, which is composed of 3rd and 4th-magnitude stars that this planet overshadows, along with brilliant Jupiter to the east. If you observe Saturn with binoculars during the course of October, you’ll find that it remains almost motionless with respect to the background stars. This is because Saturn reaches a stationary point today. It ceases its westward or “retrograde” motion (the direction all outer planets appear to move for a few months around opposition) and resumes its eastward travel against the stars.

October 12—First Quarter Moon at 11:25 p.m. In this phase, the Moon looks like a half-Moon in the sky. One-half of the Moon is illuminated by direct sunlight while the illuminated part is increasing, on its way to becoming a full Moon.

October 14—This evening’s waxing gibbous Moon forms a stretched-out isosceles triangle with Saturn and Jupiter. The two gas giants of the solar system are separated by 15°; Saturn (magnitude +0.5) shines about 9° to the upper right of the Moon, while the much-brighter Jupiter (magnitude -2.6) burns some 9° to the Moon’s upper left. Viewed at high power, Saturn is an excellent test of both atmospheric steadiness and telescope quality. The beautiful ring system is tilted about 17½° to our line of sight. Jupiter, meanwhile, resides on the other side of dim Capricornus, and is the brightest light in the sky once Venus sets. It reaches its highest point in the south soon after dark. Its disk shrinks by about 9% during October but still looms large enough to show many telescopic details if the air is steady.

October 16—This evening, take a look for 1st-magnitude Antares shining south (lower left) of Venus by just 1½°, about a finger’s width at arm’s length. Antares twinkles red, though only 1/130 as bright. Telescopically, Venus’s gibbous phase wanes to half-lit by October’s end, while the planet’s apparent diameter swells in size by 25%. Venus glides through Libra, Scorpius, and Ophiuchus during October, entering Sagittarius on November 2nd.

October 21–22—This year’s Orionid meteor shower is expected to peak early this morning. Unfortunately, the Moon is less than one day past full, and its glare will very likely spoil the view. Under better conditions, up to 20 swift meteors might be seen per hour. The meteors of this annual display have paths that appear to radiate from a spot between Gemini and Orion. Fewer Orionids might be seen on the nights leading up to the peak, especially on the mornings of October 17th and 18th after the bright gibbous Moon has set. A few Orionids can actually appear as early as the start of October and as late as November 7th or so.

October 25—Mercury reaches “greatest western elongation” at magnitude -0.6 this morning. Although only 18° from the Sun, for several days surrounding the 25th, the planet will rise before the morning twilight, making this the year’s most favorable morning apparition for observers in mid-northern latitudes. Brightening to -0.8, Mercury will pass 4° to the left of sparkly Spica on November 2nd.

October 28—Last Quarter Moon at 4:05 p.m. In this phase, the Moon looks like a half-Moon in the sky. One-half of the Moon is illuminated by direct sunlight while the illuminated part is decreasing.

October 29—Venus, resplendent at magnitude -4.6, arrives at its greatest eastern elongation, or greatest angular distance east of the Sun (47°). But the planet is so far south on the celestial sphere that it remains fairly low, just 12° above the southwest horizon 45 minutes after sunset.

Add 1/2 teaspoon of cayenne pepper to 1 cup of boiling water; stir well and gargle while mixture is still very warm. This brings more circulation to the area and helps draw away the infection.
More hints & tips 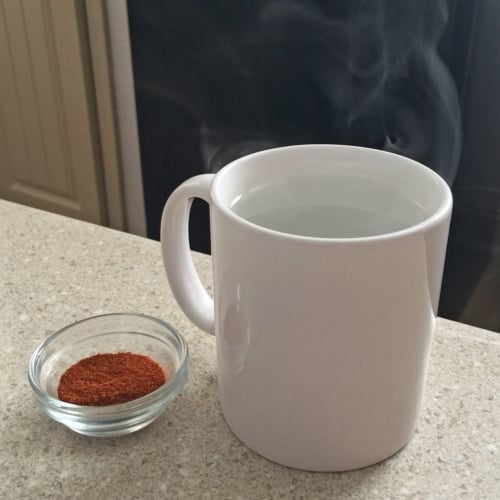