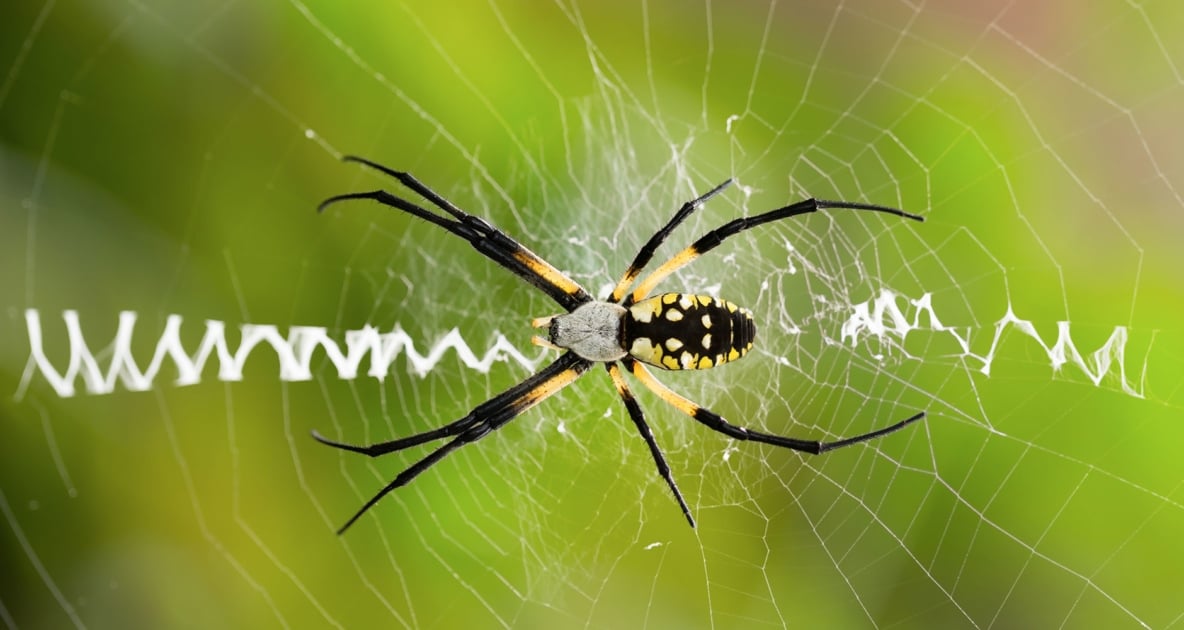 Halloween is not too far away and nothing is more iconic than seeing an enormous spider web and a scary-looking spider in the center as part of your decorations. The spiders that spin those familiar-looking webs (and the ones we draw when we think of spider webs) are known as “orb-weavers,” and are nothing to be afraid of. They’re harmless to humans and are, in fact, beneficial garden residents for their constant pest control.

This time of year, orb-weavers are busy spinning their large, circular webs—some up to 3-feet in diameter—in spots where pests are readily available: in flower and vegetable gardens, parks, fields, and forests. So how beneficial are they?

There are around 180 species of orb-weavers in North America. They vary in color, but all typically have large, bulging abdomens covered with unusual bold markings. One of the most striking is the Black and Yellow Garden Spider (Argiope aurantia). They are only about an inch in length for the female and a half-inch for the male in body length, but its distinct black markings make it look like an alien from outer space. And the webs it weaves are equally unique and stunning, with a zigzag down the center.

Their habitat on this continent ranges from Alaska to Mexico and the Hawaiian Islands, but they are found around the globe.

Before you tear down a web you see (and many can pop up overnight), know that its intricate design has a purpose at catching and killing garden pests. Orb-weavers use their silk to create a natural, sticky trap—when a bug lands on the web, it struggles to free itself. That vibration signals to the spider that it has caught prey. The spider responds by quickly injecting the prey with paralyzing venom, preventing its escape. Then it wraps the captive bug in a mummy-like cocoon of silk until it is ready to consume. Watch in the video below!

And they’re not picky eaters: typically they’ll eat whatever gets caught in their web. Eating twice its weight in insects each day, these spiders protect your plants in your garden by helping control the population of aphids, ants, flies, leafhoppers, leaf miners, grasshoppers, mosquitoes, beetles, wasps, moths, stinkbugs, and caterpillars. While the orb-weaver spiders’ diet largely consists of bugs we don’t want in our garden, it’s true that an occasional pollinating butterfly or bee may get caught in its web.

What does folklore say about spiders spinning their webs and winter weather? Find out!

Orb-weaver spiders are meticulous web builders and rebuilders, repairing the damage done by captured insects (usually at night), thus providing a sticky insect trap that never stops doing its job, without chemical pesticides, and at no cost to the gardener.

Keep An Eye Out For Them

Carefully check your lawn plants and garden to determine if an orb-weaver spider is present before doing any harvesting, weeding, or pruning. Orb-weavers often attach their web by a thin strand of silk to plant stems, vines and among bushes. For the good of your garden leave an active web in place. These spiders are year-round residents and will spend the winter in your garden too.

How to Pick Sweet Potatoes