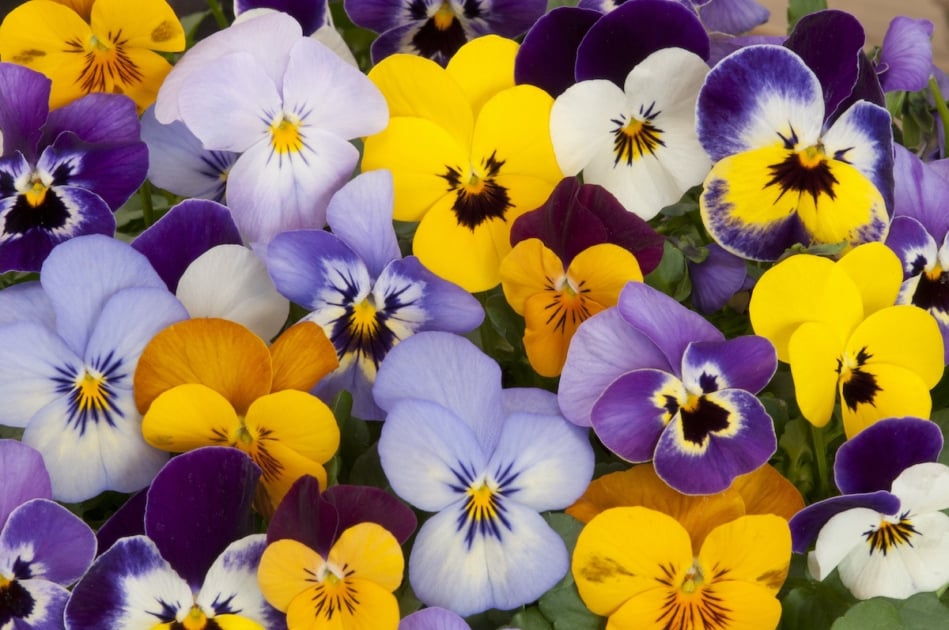 Pansies are a popular spring and fall flower because they’re not only easy bloomers but they provide a rainbow of cheery colors during the cooler months of the year. Even more interesting is that they have a rich history and symbolism behind them making them a welcome and intriguing guest to your garden. Did we mention they’re also edible?

Pansies are considered a great choice for beginning gardeners because they’re not particularly fussy. Plant them in well-drained soil that is high in organic matter to help them thrive. One thing to note about them is that they’re a cool-season flower, which means they’ll bloom best in the spring and the fall. You can also plant them in partial shade to keep them cooler and blooming longer—especially in USDA hardiness zone 7 and southwards where hot sunshine in the afternoon will make these flowers stop blooming. Unfortunately, pansies are short-lived perennials.

Another trick to keep them blooming is to remove spent flower heads. And, as the weather heats up, it’s best to cut pansies back and mulch around them to keep them moist. As the weather cools again, they’ll come back with a second flush of blooms.

Pansies are cold tolerant, though not winter hardy in harsh climates. In areas that experience frost, you can set them out a month before the last frost date—and in areas with mild winters that rarely experience a freeze, pansies can be left out all winter to re-bloom in the spring.

You can also grow pansies from seed, but they take between 10 to 12 weeks to mature and start blooming, which means you’ll need to start them early indoors if you want to enjoy spring blooms. About a week before planting, gradually start moving them outside for longer and longer spans each day to harden them off, then you’ll be able to plant them in your beds.

Flowers have been part of our diet for thousands of years. Chinese cooks experimented with edible flowers as far back at 3,000 B.C., and ancient Romans used violets, roses, and lavender in their food. Pansies are one of the most popular edible flowers, and they have a fresh, lightly spicy flavor. You’ll see them in salads and other dishes not only as decoration but to add flavor. Be sure to eat only flowers that have been grown without chemical pesticides.

Roses are probably the first flower that comes to mind when you think of blooms with lots of symbolism and folklore behind them—but the pansy may just have the rose beat. Pansies are common field flowers in Europe, so they feature prominently in many legends—including Shakespeare’s A Midsummer Night’s Dream. The play describes one legend surrounding pansies, which states that these flowers were originally pure white until they were struck by Cupid’s arrow. It’s the arrow wound that caused the dark purple color at the center of the flower.

In medieval medicine, the pansy had a few purported uses. Herbal literature in those days, namely John Gerard’s 1597 Historie of Plantes listed the pansy as useful for lung and chest inflammation, for healing scabs and itchy spots on the body, and for healing ulcers. Gerard also had a recipe for a tincture using pansies to cure syphilis.

One German legend states that pansies once had a fragrant scent, so much so that people would trample grass into the dirt in their haste to pick them. This led to cows starving since the pasture had been ruined, so the pansy prayed to give up its scent. With the prayer answered, the fields were able to grow again and feed the cows.

What’s in a Name?

When you dig into the etymology behind the pansy’s name—and various nicknames it’s had over the years—you’ll see even more symbolism. The “pansy” moniker comes from the French “pensee,” which means “thought.” Another popular name for these delicate flowers was “heartsease,” which was one of the names Gerard used for them in Historie of Plantes. Pansies have also been called “love in idleness,” “three faces under a hood,” “jump up and kiss me,” and “herb trinity.”

Between the various names and legends that have surrounded this flower over the years, pansies came to represent concepts like dreaming, humility, love, and lovers.

Rich history and symbolism, and beautiful colors, pansies are a must-have in any garden. Pick your favorite or plant a mix—they’ll reward you with cheerful little flowers all season long.

Before you get planting, be sure to check our Gardening by the Moon calendar!

What a cute idea in your photo – to plant some pansies in a tea pot! This is the first year I planted pansies in a container as I usually plant them in the ground each spring. I’m amazed at how well they do in half-sun on the front porch. All they really need is water every other day. Very easy and very pretty.

We’re so glad, Molly. They really are a nice patch of smiles, aren’t they!

Cracked eggs should only be used in dishes that are going to be thoroughly cooked.
More hints & tips