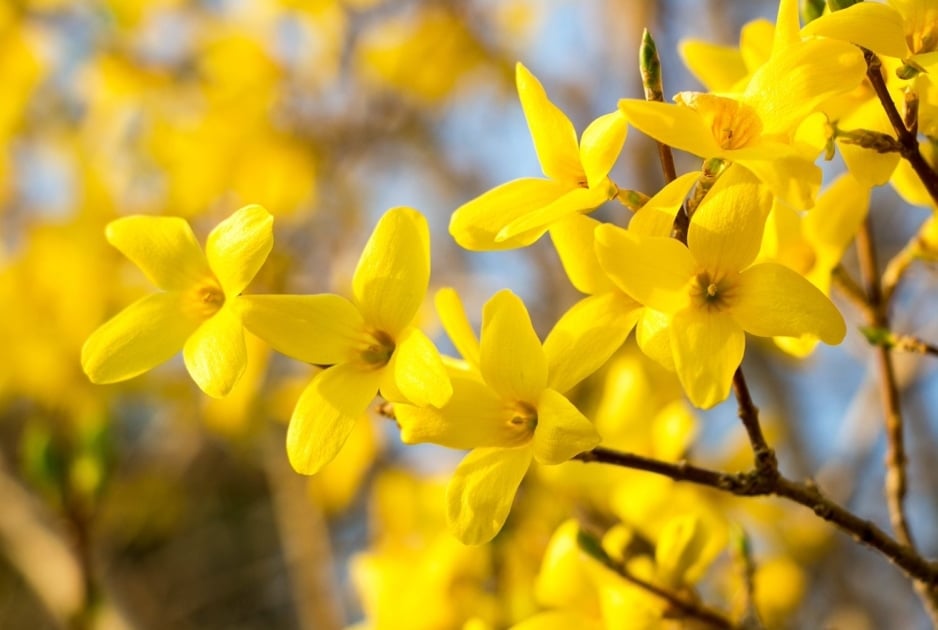 Forsythia is the perfect shrub to treat a classic case of spring fever. That’s because they’re among the earliest flowers to emerge. Branches burst with golden yellow flowers before the leaves bud, usually about the same time that daffodils and other spring flowers are also budding. But forsythia are more than just a harbinger of spring: they have an interesting history, and they’ve even got their own weather lore. If you’re interested in growing them, there’s good news: they’re an easy shrub to maintain. Without a lot of fuss, these eye-catching shrubs will reward you with boughs of sunny blooms year after year.

The forsythia varieties that we commonly see as part of the landscape are Forsythia suspensa and Forsythia viridissima, regarded as the “founding members of the forsythia family” as they were the earliest of the genus to be brought west from the Far East. By 1880, a cross between the two resulted in a new species, Forsythia x intermedia, which is another common species today found along roadways, backyards, and city parks.

Do these sunny yellow blooms mean snow is on the way?

One of the most popular bits of folklore surrounding forsythia is the saying, “three snows after the forsythias bloom.” This likely developed because at the time forsythias bloom—during the earliest part of spring—the full transition from winter isn’t quite complete. In other words, don’t pack away those shovels when you see those little yellow flowers! Many people swear by this bit of weather lore, especially weather watchers in Ohio.

In some areas, forsythia is also known as the “Easter Tree,” with this name stemming from the fact that they come into bloom around Easter time.

Forsythia is also one of the 50 fundamental herbs in Chinese herbal medicine. Forsythia suspensa, the weeping variety, also referred to as “lian qiao,” is considered a bitter, cold herb, and Chinese medicine associates it with the heart, lung, and gall bladder meridians. Chinese herbalists use it to detoxify the body, and as a remedy for headaches, fevers, and excessive thirst.*

This yellow-flowering shrub is named after William Forsyth (1737—1804), a Scottish botanist who became the royal head gardener at Kensington Palace and St. James’s Palace in England where he remained until his death. Forsyth was also a founding member of the Royal Horticultural Society in London. He created one of the world’s first rock gardens at the Chelsea Physic Garden, the oldest botanical garden in London. He had such a huge impact on gardening at the time that forsythias were named in his honor.

Forsythias are a deciduous shrub, meaning they’ll drop their leaves in the fall and winter. If you’re looking for a flowering shrub that fills in quickly, these beauties grow fast—up to 24 inches per year and up to 10 feet for larger varieties. Apart from the uncommon weeping forsythia, most of the shrubs have an upright form with long branches. And they’re a pollinator favorite as bees and butterflies love them.

Plant them in loose soil that is moderately moist but not too wet or dry—it should drain well. They’ll grow in full sun to part shade, though the more shade they get, the leggier they will be. Forsythia is cold hardy in USDA zones 5 through 8.

Don’t forget to check the Farmers’ Almanac Gardening by the Moon calendar before starting any of your gardening tasks.

Take care with pruning. Because these shrubs grow so quickly and with such long branches, they can quickly start to look unkempt—which is perfect if you’re cultivating a wild woodland look. However, if you want to keep your forsythia bushes tidy, your best bet is to wait until after their spring flowering before breaking out the clippers. Then prune out about a third of the oldest branches. If need be, you can even cut all of the branches to the ground and let the forsythia re-sprout from scratch. This is an extreme measure that you may not want to take if you want a lot of greenery over the summer.

*Not intended as medical advice.

Tiny Holes or Cracks in Windows

Try this as a temporary repair for a tiny hole in a window pane. Fill the hole with a dab of colorless nail polish, allow to dry and build up layers until the hole is completely closed.
More hints & tips