Lewiston, ME: On August 22, we greet the full Sturgeon Moon, named by the Native American tribes because sturgeon, a large fish of the Great Lakes and other major bodies of water, were most readily caught during this month.

You may have also this full Moon referred to as a “Blue Moon.” This might be a head-scratcher since most of us are familiar with the definition of a “Blue Moon” as two full Moons occurring in a single month (the second being christened a “Blue Moon”) like we had in On Halloween 2020. But it turns out, that might not be an accurate definition thanks to a decades-old mistake.

There’s another definition of a “Blue Moon” that has to do with the number of full Moons throughout a single season, which is the case this month.

For the longest time, nobody knew exactly why the second full Moon of a calendar month was designated as a “Blue Moon.” One explanation connects it with the word belewe from the Old English, meaning, “to betray.” Perhaps, then, the Moon was belewe because it betrayed the usual perception of one full Moon per month.

However, in the March 1999 issue of Sky & Telescope magazine, writer Phillip Hiscock decided to get to the bottom of the somewhat confusing origin of the term. It seems that the modern custom of naming the second full Moon of any given month a “Blue Moon” was actually based on a misinterpretation outlined in an article in the March 1946 Sky & Telescope magazine. That article was titled, “Once in a Blue Moon,” written by James Hugh Pruett, who incorrectly summarized what he read in the Maine Farmers’ Almanac (no relation to this Farmers’ Almanac based in Lewiston, Maine). Pruett declared that a second full Moon in a calendar month is a “Blue Moon.” However, Pruett’s summary was an incorrect interpretation of what the almanac was saying!

After reviewing what was actually written in the Maine Farmer’s Almanac on the subject, Hiscock found that the Maine Farmers’ Almanac‘s definition of a “Blue Moon” was derived from a completely different (and rather convoluted) seasonal rule. As simply as can be described, the almanac stated that there are normally three full Moons for each season of the year. But when a particular season ends up containing four full Moons, then the third is called a Blue Moon. If you’re wondering how Pruett could make such an error in his interpretation, you’re not alone.

In most years, there are twelve full Moons—one for each month, and three for each of the 4 seasons. In 2021, there are 12 full moons, yet four of them occur within the boundaries of our current summer season: June 24th, July 23th, August 22nd, and September 20th. Thus, according to the “Almanac” rule, August’s full Moon, the third of four Moons this summer of 2021, is branded a “Blue Moon.”

When Will The Next Blue Moon Appear?

The next Blue Moon according to the “two-in-one-month” definition is August 31, 2023.

Does The Moon Really Turn Blue?

On past occasions, usually after vast forest fires or major volcanic eruptions, the Moon has reportedly taken on a bluish or lavender hue. Soot and ash particles propelled high into the Earth’s atmosphere, can sometimes make the Moon appear bluish. But the full Moon of any month or season doesn’t turn blue in color.

Time-tested and generations-approved, the Farmers’ Almanac is a compendium of knowledge on weather, gardening, cooking, home remedies, folklore, managing your household, living in harmony with nature, and more. The 2022 edition is available wherever books are sold and online at FarmersAlmanac.com/buy.

I guess nobody liked that number hence only 12 months to a year.

February is the only “true” mathematical month,
and even then
only 75% of the time.

J. Grimmer, we saw your note on FB as well. How are you determining that there are 13 full Moons a year?

Cooks know lemon juice works well to keep apple slices from browning but did you know honey also does the job? Stir two tablespoons of natural, raw honey into one cup of water and soak your apple slices for 30 seconds. A compound in honey helps slow the oxidization process responsible for browning.
More hints & tips 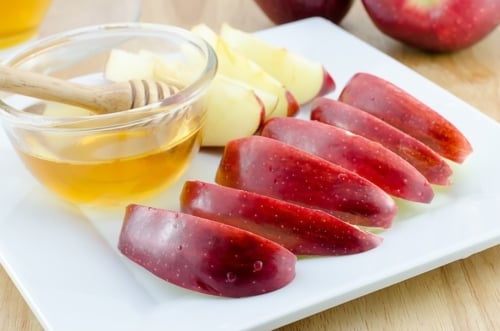