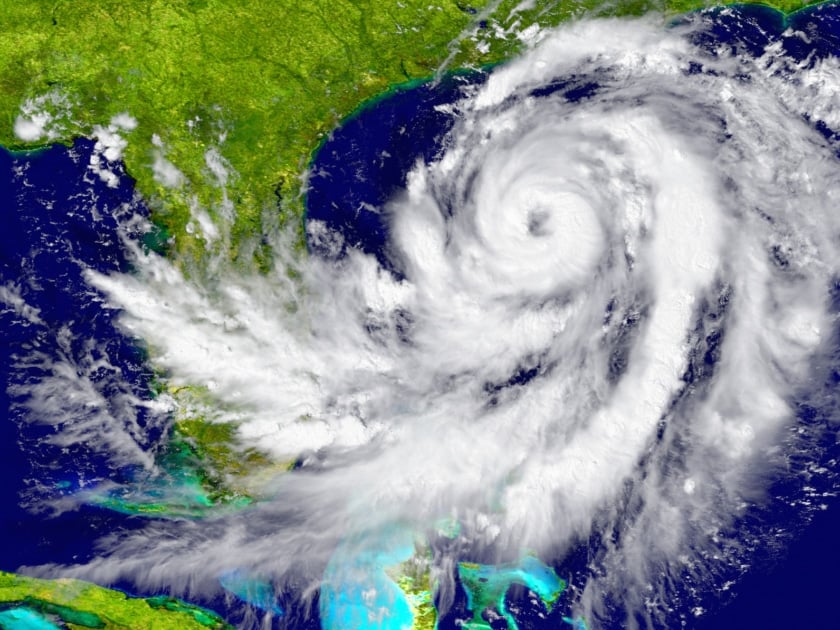 September is peak hurricane season (the “season” runs from June 1 to November 30, although a hurricane can strike at any time), and we’ve all recently seen the reports of the devastation from hurricane Florence. When a hurricane strikes, the destruction and loss of life that the storm’s heavy winds and rains can cause can be devastating. Here is a list of 12 recorded U.S. hurricanes that have claimed the most lives.

12. Camille, 1969
Category: 5
Wind gusts: 200+ mph
Ocean surge: 24 ft above normal
Deaths: 256
Camille turned from a tropical storm into a hurricane when it was south of Cuba and strengthened as it moved northwestward, striking Mississippi as a Category 5 hurricane. Wind gusts exceeded 200 mph and the ocean surge was 24 feet above the usual high tide. Approximately 143 people were killed along the coast from Louisiana to Alabama, and an additional 113 died as Camille’s rains produced flash floods inland in the Appalachian Mountains.

11. Great New England Hurricane, 1938
(With a death toll approximately the same as Camille)
Category: 3
Wind gusts: 186 mph
Ocean surge: 17 ft above normal
Deaths: 250+
In late September 1938, an unnamed hurricane, on unusual air currents, traveled farther north than any other hurricane had since 1815. Later named the “Great New England Hurricane” and also “The Long Island Express,” the U.S. Weather Bureau did not anticipate the storm curving toward land, so it hit Long Island before warnings could be issued. After ripping through Long Island, it tore into New England as a Category 3 hurricane, sending extreme storm surges into Narragansett Bay and Buzzards Bay. As the hurricane headed inland, its heavy rains produced torrential flooding, especially along the Connecticut River. The number of deaths was estimated to be approximately 250, with some reports putting the number killed as high as 580. A contributing factor to the death toll was the fact that a powerful hurricane had not hit New England in almost a century, so when warnings were finally issued, few people realized just how vulnerable they were.

10. Eastern Texas and New Orleans, 1915 (Both unnamed)
Category: Both 4
Deaths: 275 for each of them
The year 1915 was especially devastating, with five separate hurricanes recorded off the United States. The two worst hit were Texas and Louisiana. Eastern Texas, struck on August 17, had approximately 275 deaths.

9. Superstorm Sandy, 2012
Category: 3
Deaths: 285
Hurricane Sandy first developed as a tropical storm in the Caribbean on October 22, 2012. On October 23, it reached Jamaica as a Category 1 hurricane. From there, Sandy blew through Cuba and Haiti before finally making landfall again on October 29 in New Jersey. Sandy is a historic storm not just for its death toll, but also its unusual storm track and the sheer amount of damage that it caused. This was the second largest storm system ever recorded on the Atlantic, and right before making landfall, the hurricane took a turn to the west, causing scientists to say that this was a “once-in-700-years track.” Having done more than $65 billion in damage in the United States, Sandy is also the second-costliest storm on record.

8. Florida Keys and Texas Hurricane, 1919 (Unnamed)
Category: 4
Deaths: 287
The path of this particular unnamed hurricane was almost due west, first causing misery in the Florida Keys, then continuing across the Gulf of Mexico and smacking Corpus Christi, Texas. Many of the deaths from the storm were the result of several ships sunk.

7. Grand Isle, Louisiana, 1909
Category: 3
Wind gusts: 80 mph
Ocean surge: 15 ft.
Deaths: 350
With a fifteen-foot storm surge, this hurricane caused the inundation of much of southern Louisiana, killing at least 350 people. Although its wind speed (80 mph) was less than that of many of the other hurricanes in the top ten, this storm proved that storm surge into a low-lying area can be more deadly than a more powerful hurricane striking an area with a higher elevation.

6. Miami, Pensacola, Florida, Mississippi, and Alabama, 1926 (unnamed)
Category: 4
Deaths: 372
In the early morning hours of September 18, 1926, this Category 4 hurricane hit Miami, crossed Florida to the northwest, and entered the Gulf of Mexico before it finally slammed into Alabama and Mississippi. In its wake lay 372 victims. Many of the dead died needlessly in the Miami area, thinking, as the eye of the hurricane passed overhead, that the storm was finished. Over 25,000 people were left homeless in the Miami area, and the storm quickly became known as the Great Miami Hurricane.

5. Florida Keys Hurricane (unnamed), 1935
Category: 5
Deaths: 408
Striking the Florida Keys first, this unnamed storm (later dubbed the Labor Day Hurricane) continued north along Florida’s west coast past Tampa and eventually made a second landfall at Cedar Key, Florida. This storm’s particular impact will always be remembered for what happened on the rail line linking the Florida Keys to mainland Florida. A ten-car evacuation train had been sent to the Keys from Homestead, Florida, to rescue a large group of World War I veterans who were employed building a new road bridge in the Upper Keys. Before the train could reach the men, it was washed off the tracks. The veterans faced the full fury of the storm unprotected. Of the 408 people killed during the hurricane, more than half of them were veterans working on the road project.

4. Audrey, 1957
Category: 4
Deaths: 419
Hurricane Audrey slammed into eastern Texas and western Louisiana as a Category 4 storm, causing over a billion dollars in damage and 419 fatalities. Tornadoes were spawned as a result of the storm, adding to the devastation caused by storm surge and the winds. Water from the storm surge extended an incredible 25 miles inland. Audrey hit quite early in the season for a hurricane, making landfall on June 26, 1957, and was the first named hurricane that year.

3. Katrina, 2005
Category: 3
Deaths: 1,800
On August 29, 2005, Hurricane Katrina made landfall along the Louisiana-Mississippi border, causing death and destruction on a historic scale. A Category 3 storm, Katrina’s rain and storm surge caused almost every levee in metropolitan New Orleans to fail. At least 1,800 people died. A study of the victims found that most had survived the height of the storm only to die in the flooding that followed the breaching of the levees. Federal, state, and local government agencies were widely criticized for their slow response to the plight of the people of New Orleans. Katrina is considered the costliest hurricane in U.S. history, with damages totaling $108 billion.

2. Lake Okeechobee, Florida, 1928
Category: 4
Deaths: 2,500-3,000
In 1928, the area around Lake Okeechobee supported mostly farmers who felt safe from any storm surge originating from the lake because of a series of man-made dikes. But the hurricane, now known as the Okeechobee Hurricane, made the dikes seem no stronger than paper. Killing hundreds as the storm roared first through the Caribbean, the hurricane then crossed over Puerto Rico, slammed into Florida near West Palm Beach, and headed toward Lake Okeechobee. Residents near the lake had been warned of the storm’s approach, but when it did not arrive at the time predicted, many thought the storm was over and returned to their homes from higher ground. When the hurricane hit later with the full force of its 140 mile-per-hour fury, the south-blowing wind created a storm surge that sent a wall of water barreling through the dikes at the south end of the lake. The people and their homes were swept away by the rampaging water, many dumped into the Everglades, never to be found.

1. Galveston, Texas 1900
Category: 4
Deaths: 8,000-12,000
This was the big one in terms of casualties. It is estimated that between 8,000 and 12,000 people died, largely because of the 20-foot storm surge that took Galveston’s citizens by surprise on September 8, 1900. Late warnings were issued by the U.S. Weather Bureau, but many people stayed put, preferring to watch the rising surf. When the Category 4 storm made a direct hit on the barrier island Galveston, half the town’s homes were swept away, many with the occupants still inside. When the storm passed, bodies were found high in trees and in walls of debris that were three stories high. Many victims were simply never found, either having been washed out to sea or buried under tons of sand. Disposing of the bodies that were found proved to be a major and horrific undertaking. “Dead Gangs” were formed to collect the dead, which were burned, while the squeamish workers were plied with whiskey to keep them at their task. Approximately 700 bodies were loaded onto barges and deposited 18 miles out at sea, only to later wash up on Galveston’s beaches.

Hurricane Glossary
Learn the differences between an advisory, warning, and more with this list of the most frequently used hurricane terms and their definitions.

Hurricane Tips: How To Be Prepared!
Being prepared before and during a hurricane can mean the difference between life and death. Check out these essential tips and keep them in a handy place.

Hurricane Preparedness: Is Your Pet Safe?
Hurricane season is here and will peak on September 10th. Learn ways to help keep your pet safe in case of a weather disaster.

How Much Do You Know About Hurricanes?
They may be more deadly than you think. Read these hurricane facts.

Before winter, mulch strawberries, roses, and other tender perennials with at least 2" of straw or bark chips.
More hints & tips