Keep in mind, not every region of each of these states will see the Brood X cicadas, however, because they often tend to stay close to where they emerged, reproduced, and went into hiding during their earlier life cycles. So, if your saw lots of cicadas in 2004, there’s a good chance you will see Brood X in 2021.

Cicadas usually emerge after a soaking rain and when soil temps reach 64 degrees F. If you want to monitor soil temperatures where you live to determine when you’ll see them emerge, here’s a step-by-step guide on how to do it.

Brood X, the Great Eastern Brood, was last seen in 2004. Brood XIX, or the Great Southern Brood, last seen in 2011, encompasses most of the Southeastern U.S. In any given year, there is usually at least one brood emerging somewhere in the country.

These cicadas have the longest lifespan of any known insect, and spend most of their lives beneath the ground feeding on plant roots before emerging to the open air for a few short weeks to mate and lay their eggs. Then the noisy insects die off and the cycle starts again.

Periodical cicadas are large in size—up to 2” long — with prominent red eyes, intricately veined transparent wings, orange and black bodies, and a resonant, unmistakable song. Male cicadas have noisemakers called tymbals in their abdomens, which they click together at a rapid pace to produce a unique wailing sound. Because their abdomens also include a hollow echo chamber, their song can be exceptionally loud. As nymphs, they are wingless, and they molt to take on their adult form, leaving behind a papery brown exoskeleton. According to Cicada Mania, 17-year periodic cicadas are never green.

Their sound is a bit chilling, but take a listen:

The 17-year variety of periodical cicadas is only one type of cicada. There are also 13-year cicadas, as well as more common cicadas, popularly known as “Dog Day Cicadas” because they usually show up in mid-July, during the Dog Days of Summer, and hang around year after year.

Entomologists believe that periodical cicadas developed their unusual pattern as an evolutionary tactic to foil predators. Because each brood emerges in such great numbers — more than 1.5 million per square acre in some areas — there simply aren’t enough predators to eat them all, which helps the species to survive.

Cicadas don’t bite or sting, and are therefore mostly harmless to humans. Some find their vast numbers to be a nuisance, while others are enchanted by them.

Are Cicadas The Same As Locusts?

The short answer is no. Because of their tendency to appear in vast swarms, cicadas are often colloquially referred to as locusts, though locusts are technically a different species that also appears in epic proportions. Cicadas are related to crickets, while locusts are actually grasshoppers.

The insects are considered a delicacy in some countries, and can be eaten raw or prepared any number of ways. Read: 10 Best Edible Insects

Cicadas are rich in folklore and symbolism, thanks, no doubt, to their striking looks, unique sound, and unusual life cycle.

In China and Japan, they are seen as a symbol of reincarnation, and of the fleeting nature of life. In France, they represent nonchalance or joie de vivre. In ancient Greece, they symbolized immortality, as illustrated by the myth of Tithonus, who turns into a cicada after being granted eternal life, but not eternal youth, by the god Zeus.

There is also a bit of weather lore surrounding Dog Day cicadas. The day of their first emergence is said to be a marker for when first frost will arrive — exactly six weeks later.

Whether their arrival has some sort of symbolic significance to you or not, there’s no denying that a brood’s emergence is awe-inspiring. If you’ve never experienced an emergence for yourself, here’s a video showing just how thick, and deafening, these insects can be.

We want your Pictures and Videos!

If you live in Cicada Alley and want to share your pictures of videos with us, just tag us @FarmersAlmanac on social media!

Hoping someone can answer this question for me: in the summer of 2019, where I live, in the Lower Hudson Valley of NY state, there was a lot of cicada, locust and cricket activity…it was a loud summer with these creatures, louder than other summers. My point is, did anyone else notice the summer of 2019 being a very active summer as well with these bugs? I thought I was in the clear, now I read it is this season? I am very confused ….:( 🙁 . Thanks in advance for your answer. 🙂

Hi Liz, there are other species or “broods” of cicadas that emerge yearly, which is what you’re hearing each summer.

Hi Mari, there are actually 2 videos. And they’re there. Try refreshing your page?

Suffocated very interesting piece. When I see them I will now know what they are, and why they’re there.

Will they eat crops and/or flowers?

No, their mouthparts are only used for sucking liquid out of tree roots. They do make a small incision in the tree branches to lay their eggs, but this generally doesn’t harm the tree. Weird little creatures, but generally harmless, and very good for the soil when they die.

Will we be seeing any of these 17 yr Cicadas in Southern Ontario, Canada?

Hi Theresa, we just checked out this article, and it looks like Canada will not be exempt from these critters. Take a look.

@Susan Higgins – I just read the whole article from your link but I didn’t see anything mentioning Canada.

Hi D D Tay, Our apologies. Originally, Canada was part of the forecast “alert,” but because these creatures don’t migrate, I’m not seeing anywhere where Canada will be affected. If we get new information we’ll update the story.

The emergence video is gone? I’m disappointed! Just moved from Washington state to North Carolina and came in the end of august so I heard a little bit that’s all.

Hi Mary, we see both videos still in the post. Did you try refreshing your browser page?

Oh my gosh, we had a 17 yr emergence here in central PA about about 2008 and it was 17 yrs since the last emergence, so I REALLY REALLY hope none emerge here this summer… That summer was SO bad and even tho they are not harmful to humans, they FREAK ME OUT, they were so thick in my trees, i could hear them flying into the sides of the house all day, and the NOISE was terrible, I had to take anxiety medication 3x/day! If they come out this year again so soon I will have to go away somewhere, seriously! 😛

I am on the same page. I’m definitely going to have to be medicated to get through it. I thought I would travel to Canada to get away from them but looks like Canada will also be Cicada land. Uuugghhhhhh

I was just gifted a young peach tree. Are there special things I should do when planting it (Southeastern PA) to protect it from cicada damage?

Jaime McLeod
Reply to  Other Barb

Other Barb – Adult cicadas should not be any danger to your tree. Cicadas do most of their feeding underground as larvae. Once they emerge, it’s mating that’s on their minds.

Being from Oklahoma, I looked forward each summer when the cicadas returned as their song was comforting. But then I don’t recall the invasion as shown by the above film.

If you remember them each summer, Sharon, you’re probably referring to dog day cicadas, not periodic cicadas. Only the periodic variety emerge in startling quantities.

Are the dog day cicadas going to be In Canada or the periodic emerging cicadas?

Here in Florida we figure that when they start singing, it is usually 6 weeks before the first cold/cool front. Sometimes they aren’t bad & you tend to ignore the sound. Other times they are so bad that the sound is almost defening.

Experts recommend turning off cruise control if it’s raining or snowing. Cruise control may cause you to actually lose control in these conditions. If you hydroplane while you’re in cruise control, your car will actually go faster.
More hints & tips 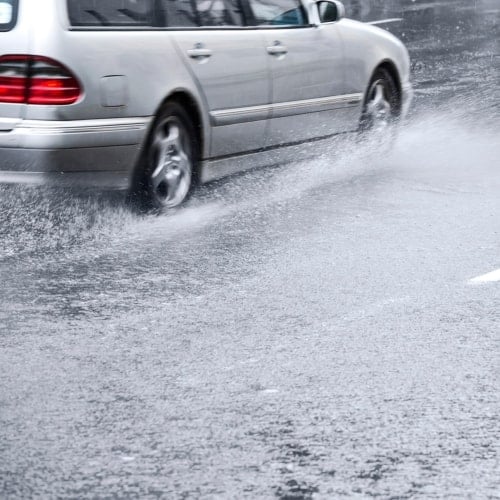