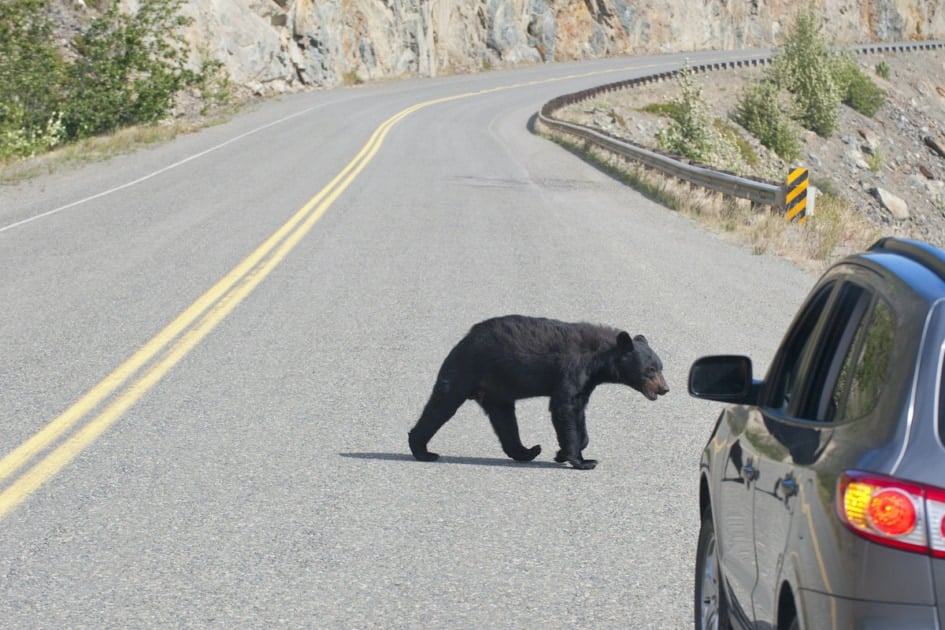 Due to Alaska’s fairly constant weather patterns, the Farmers’ Almanac provides an overall climatological summary for Alaska. This summary should give you a good idea of what type of weather to expect if you are traveling to this great state.

Temperatures usually remain below the freezing point for most of the year, with daily maximums reaching higher than 32°F an average of 110 days per year. Freezing temperatures have been observed every month of the year. February is generally the coldest month. March temperatures are warmer than those observed in the other winter months, and in April, temperatures begin a general upward trend. May is a definite transitional period, and July is the warmest month of the year. During late July or early August, the Arctic Ocean usually becomes ice-free for the summer. High readings of 70°F or above have occurred on rare occasions in this part of Alaska.

The end of Alaska’s short summer is reached in September. By November, about half of the daily mean temperatures are either zero or below. Thanks to a modifying effect of the ocean, the long Arctic night temperatures of the immediate coastal areas do not drop to the extreme low readings reached in the Alaskan interior. Snow covers the ground about eight months of the year, and usually falls every month of the year. For Barrow–the most northerly first-order station operated by the National Weather Service–every year the sun dips below the horizon at 12:50 p.m. on November 18, and is not seen again until 11:51 a.m. on January 24.

From the 24th on, the amount of daylight increases by more than 9 minutes per day. By 1:06 a.m. on May 10, daylight has increased to 24 hours per day. The sun remains visible from that time until August 2, when it begins to set again for 1 hour and 25 minutes. The decrease in hours of daylight is as rapid as the increase. For all other areas in this Alaskan zone, the sun remains below the horizon from late November until mid-January, and continuous daylight runs from the middle of May through the end of July.

The climate in this zone of Alaska is conditioned chiefly by the response of the landmass to the large changes in solar heat received during the year. The sun is above the horizon for 18 to 21 hours a day in June and July. During this period, most locales see daily maximum temperatures reach into the lower 70s. Temperatures of 80°F or higher occur about 10 to 15 times each summer. An exception is Nome, where average temperatures run about 20° cooler because of winds blowing in from the nearby Norton Sound. In contrast, from November to early March, when the amount of daylight ranges from 10 to less than 4 hours per day, the lowest temperature readings will fall below zero. Low temperatures of -40 to -50°F or colder occur each winter in this part of Alaska.

Long periods of five to ten or more days of extremely low temperatures occur during the winter months. Once again, Nome is the exception, with Norton Sound moderating the local temperatures. While Nome’s overnight winter temperatures typically fall to near zero, readings lower than -20°F are uncommon. From October through April, snow cover is persistent in most areas, without interruption. In the western section, storm systems passing to the south result in strong easterly winds, accompanied by frequent blizzards.

Farther to the east, however, toward Fairbanks, blizzard-like conditions are almost never seen. There, snowfalls of 4 inches or more a day occur only three times during winter. Even though little overall precipitation falls during wintertime, the snow is so puffy and dry that accumulations can be quite significant. Precipita- tion normally reaches a minimum during winter and spring, and a maximum during July, August and September when rainfall is common. During winter, with temperatures of -20°F or colder, ice fog frequently will form. Cold snaps accompanied by ice crystals and fog generally last about a week, but can last three weeks in unusual situations. The fog is almost always 300 feet deep, which means that upland areas are usually clear and experience warmer temperatures.

Aside from low visibility during a winter ice fog, crystal-clear weather is common in this zone of Alaska from January through May. In contrast, there is nearly continuous cloud cover during July and August. The average occurrence of the last freeze in the spring is late May. The first freeze in the autumn normally occurs in mid-September. The freezing of local rivers usually begins in the first week of October, and they remain frozen and safe for travel, until about early April.

The climate in the western and southern sections of this Alaska zone is more maritime than continental in character, and that modifies the daily temperature extremes. Northern and eastern sections are predominantly continental. However, there are usually two periods during the year when the entire zone is affected by the continental climate. In June and July, temperatures rise noticeably under the influence of warmer continental air, and around late December and early January, the cold, clear continental air becomes quite dominant. Another aspect of this zone is its highly varied terrain, which exerts pronounced effects on local weather and climate.

This is especially true for a place like Anchorage, where large temperature and precipitation variations can occur over relatively short distances. The four seasons are well marked. In the summer, high temperatures average in the 60s and low temperatures in the 50s. Temperatures in the 70s are considered very warm; seldom do high temperatures ever reach the lower or middle 80s. Rain increases after mid-June. Most days in July and August are cloudy and at least one third of them have rain. August through October is the wettest time of the year for most sections. Autumn is brief, beginning in early September and ending in mid-October. Temperatures begin to fall in September, with snow becoming more frequent in October in this part of Alaska.

The average date of the last snow is mid-April, but may be as late as early May. Temperatures steadily decrease into January, when the highs are near 20°F and the lows near 5°F. The coldest weather is normally in January, when very cold days have high temperatures below zero. Average temperatures throughout the entire winter, however, are considerably higher than those experienced in the Alaskan interior (North Central zone). Mild days with temperatures in the 30s do occur. Annual snowfalls vary from about 60 to 90 inches.

Freezing rain is extremely rare. Heavy fogs are infrequent and of short duration, but patchy ground fog is common during the spring and fall. In general, ice fog does not occur. Spring begins in late April and early May, when days are warm and sunny, nights are cool, and precipitation amounts are exceedingly small. Foliage turns green in most sections by late May/early June. For most sections of this Alaska zone, the average occurrence of the last freeze in spring is during the second half of May, while the first in fall is during the first half of September.

Due to the Pacific Ocean, the climate of this Alaska zone is distinctly maritime. This means that temperatures are relatively mild, and daily variations between the high and low readings are small, with the range between 8 to 16 degrees. Periods of subfreezing temperatures seldom extend beyond ten days duration, and minimum readings of zero to -20°F are a rare occurrence. Conversely, extremely high temperatures occur infrequently during the summer months. Temperatures reach the 80°F to 85°F range nearly every year, chiefly in June, July, and August. Yet, it is not unusual for daily maximum readings to remain in the 50s during the summer months.

At Juneau, the state capital, extremes include a maximum of 89°F in July to a minimum of -22°F in February. This Alaskan zone is located almost directly in the path of easterly moving storms that cross the Gulf of Alaska. Frequent and relatively heavy precipitation occurs, with annual amounts close to that of the immediate coastal regions of Washington and Oregon. Due to a rugged topography, precipitation amounts vary greatly in different localities, even in adjacent localities. Yakutat has an annual precipitation of around 130 inches, one of the highest in the state.

June has the least precipitation of any month, while October and November are usually the wettest months. Most of the precipitation, even in the winter months, occurs in the form of rain. Some snow, mixed with rain, may fall as early as October. Snow has fallen in all months of the year except June, July, and August. However, appreciable snowfalls seldom occur after late March or before late November.

Accumulated snow depths of a foot or more are infrequent in this zone of Alaska and, because of moderating temperatures, snow covers seldom persist beyond a week or two. Strong southeasterly winds are frequent from October through March. Thick fogs are infrequent and of short duration.

This Alaskan zone has a climate rather similar to that of the Southeast Coast, except that precipitation, though frequent, is not as abundant. Due to the moderating effects of the ocean, it is difficult to define any seasonal periods. The beginning of spring is in late May or early June. August is regarded as the midsummer period and autumn arrives in early October. Fog occurs frequently in the summer season, with the foggy period extending from mid-July to mid-September. During the winter months, visibility in this zone of Alaska is often restricted due to blowing snow.

ALASKAN WEATHER IN A NUTSHELL

If you have ever yearned to visit Alaska, our vast 49th state, you can certainly see by our five Alaska weather summaries that it can offer an extremely wide variety of weather conditions. Your best bet, if you desire sunny, clear skies and not-too-cold conditions, seems to be a visit in the late spring or early summer. From midsummer into the fall, clouds predominate, and are quickly followed by an increase in precipitation.

The weather tends to clear by the winter, but it also turns quite cold, or downright frigid, depending on what part of the state you are visiting. Outbreaks of extreme cold and blizzardlike weather do not occur as frequently as you might think, but they do occur. Along with the wide variations in the climate, visitors to Alaska can enjoy the unusual length of daylight during the late spring and early summer. A trip to the Arctic north can even give you a glimpse of the midnight sun.

And, with clear skies, a glance to the north should give you a glimpse of the beautiful aurora borealis (northern lights). The late artist Bob Ross (whose how-to-paint show continues to be a viewing staple on many PBS television stations) used to often say, “God had a good day when he made Alaska.” From all of the weather just described, we would certainly agree!

Vegetables cooked in less water and for a shorter period of time will lose fewer of their nutrients.
More hints & tips 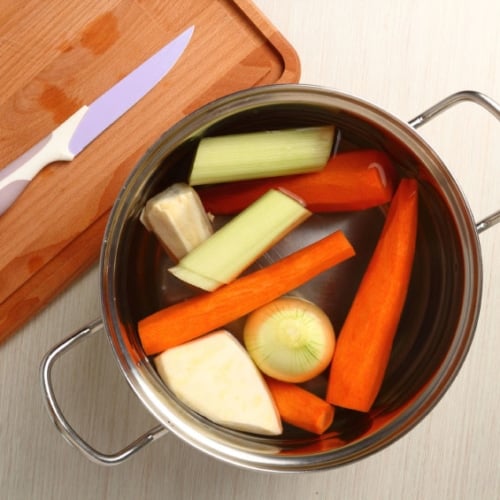