The Demon Wind: A Weather Folklore 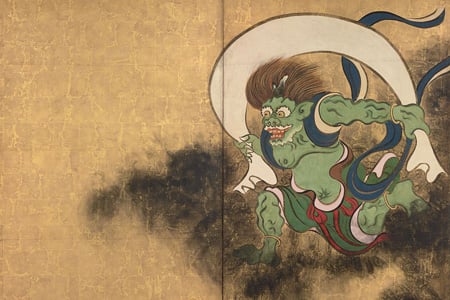 To early people, the wind must have been a terrifying mystery. One minute the air could be still and calm, and in the next, a violent gale could rise up and flatten buildings or uproot trees. Even more unsettling, this powerful force was invisible. It came without warning and, though the devastation it left behind couldn’t be denied, the cause was never seen.

To explain the seeming caprices of the wind, the ancient Japanese personified it in the form of Fūjin, a malicious demon. Portrayed as a large, lumbering figure with dark skin and disheveled hair, Fūjin wore only a fur loincloth — often a leopard skin — and carried a large bag across his shoulders that contained the wind. When he became angry, he would squeeze the bag, and violent bursts of air would escape, battering the countryside.

Today, we know that the wind is simply a part of nature, with no will of its own. Though it can be beneficial or devastating, it blows without regard for its effect on humans.

Wind occurs when there is a difference in air pressure between one area of the Earth’s surface and another. Air naturally moves from areas of higher pressure into areas of lower pressure. Sometimes the difference in pressure is minor, resulting in a gentle breeze. At other times, the difference is greater, resulting in violent winds that move faster than 250 miles per hour (the fastest wind ever recorded was clocked at 253 miles per hour on April 10, 1996, on Barrow Island, Australia).

Because of the Earth’s rotation, however, the air does not move in a straight line from the point of highest pressure to the point of lowest pressure. The Earth’s rotation pushes the air to the right. This phenomenon, called the Coriolis Effect, causes air to flow clockwise around high pressure areas in the Northern Hemisphere and counter-clockwise around low pressure areas. The reverse happens in the Southern Hemisphere.

Before we knew about air pressure, though, the people of Japan had no explanation for wind other than the whims of a rampaging demon. And so, Fūjin was born.

Thanks Dawn, I found all of that, but it doesn’t address Vicki’s question, which was why we call it a “sundog.” The origins of the name are Norse, but I know of no mythological significance to it.

Any wind over 15 mph is evil. We’re expecting high winds today/tonight and I’m already panicking. I hate wind. (Could you tell?)

Jaime, I enjoy reading about this kind of thing. Yesterday in our region we saw a huge Sundog, and I was explaining what it was to our foreign fellows who had never seen one before. They asked where the name came from, and other than knowing it’s Norwegian roots of Solhund, I couldn’t find any thing more about it. Why “dog”?

Vicki – I can’t seem to find the origin of the term “sundog,” beyond what you stated here. It doesn’t have any mythological significance that I know of. Sorry I can’t be of any more help.

Add breadcrumbs to scrambled eggs. It will increase the volume and add flavor.
More hints & tips