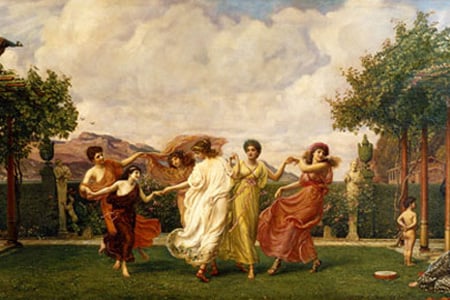 We’ve already looked at the story of Persephone, which explains why there are seasons. Beyond her story, though, the ancient Greeks also had a series of goddesses, collectively named the Horae (Hours), who controlled various aspects of nature and time, including the seasons.

Among them was Xarpo (also spelled Carpo or Karpo), goddess of autumn and the harvest. She had two sisters, Thallo and Auxo, goddesses of spring and summer. All three sisters were attendants of Aphrodite, goddess of love, and guarded the path to Mount Olympus. Xarpo was specifically responsible for ripening crops.

Of course, today we know that the real cause of the cycle of seasons is the tilt in the Earth’s axis. As the planet revolves around the Sun, its northern and southern hemispheres take turns soaking in the majority of the Sun’s light and heat. During the part of the year when the northern hemisphere is inclined toward the Sun, that part of the Earth enjoys summer weather. The days grow longer, and the temperatures grow warmer. Things begin to grow. As time goes on, and the Earth continues its journey around the Sun, the southern hemisphere gets its proverbial day in the Sun. Things warm up down there, while temperatures grow colder and days get shorter in the northern hemisphere. Trees lose their leaves, and vegetation wilts away, becoming scrubby from lack of sunlight. This is the time of year when people have traditionally celebrated the harvest.

Without understanding the relationship between the Earth’s hemispheres and the Sun, the ancient Greeks were at a loss to explain the true cause of the seasons, so they invented the Horae to explain the differences between the various times of year.

Yeah Jaime, but I think too, the gods are personifications of tendencies and themes in the world, like seeing world in terms of literature. Your Horae strike me as steadfast, something true of the seasons but more naturally pictured in representative personalities.

Love the picture of dancing ladies. What is the name of it and who is the artist, please?