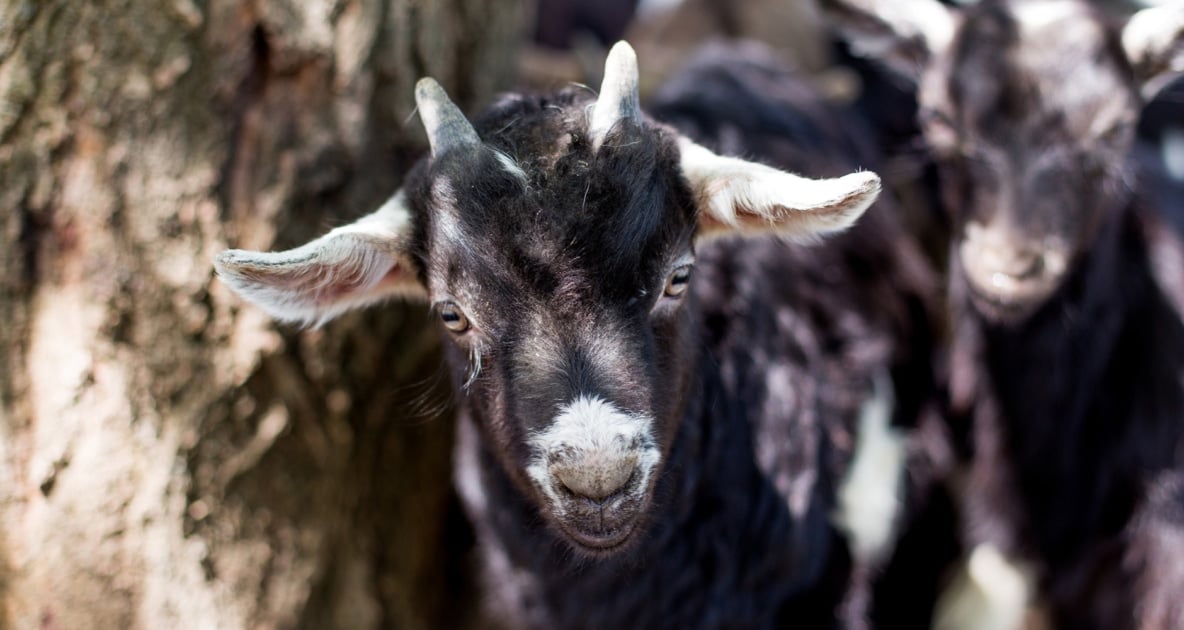 What would you do if you visited a local animal farm and upon greeting the barnyard goats, they suddenly toppled over? You might panic upon seeing one of these gentle creatures hit the ground. But if you were visiting a farm with fainting goats, it would be a daily occurrence.

Wait, what? Goats that faint?

No, we’re not pulling your leg. There really is such a thing as fainting goats. You might have a lot of questions — as we did — about this strange occurrence in nature. Such as, do they really faint? Is it bad for the goat? How did fainting goats come to be, anyway? We have the answers.

Technically, no. Fainting goats do not lose consciousness, but they do stiffen up and fall over when startled. This is how fainting goats came to be named “myotonic” goats — myo from Greek, meaning muscle, and tonus from Latin, meaning tension. These goats all have a hereditary genetic condition called myotonia congenita, which is a condition that occurs across a variety of animals, even sometimes in humans. The difference is that fainting goats have been selectively bred and all fainting goats have this condition.

When a fainting goat is startled or feels extreme fear, muscles throughout the body freeze for a few seconds. Because of this, the goat falls over, although older goats often learn to deal with the condition and manage to stay standing even though their muscles have seized.

This condition only affects the goats’ muscles, and it is thought that the problem occurs on a molecular level. The theory is that the chemical rush that most animals experience from fear or excitement is somehow blocked in fainting goats. Instead of these “fight or flight” chemicals triggering a normal response like jumping or running away, in fainting goats, the muscles lock up instead.

Interestingly, it isn’t just fear that causes this reaction in fainting goats. Sometimes, they faint just because they are excited. People who own fainting goats say that playtime or even dinnertime is enough to trigger the reaction.

Is “Fainting” Bad For The Goats?

The “fainting” isn’t necessarily harmful to these goats. It only affects their muscles, not the nervous or cardiovascular systems. The real danger comes from fainting goats falling off tall objects during a “spell.” Of course, as giggle-inducing as it may be to see these goats fall over, people should also take care not to startle fainting goats just to see the reaction. Nobody—not people or goats—likes to be constantly startled!

Where Did Fainting Goats Come From?

Fainting goats go by many names depending on the region. They are often called myotonic goats, Tennessee fainting goats, stiff-leg goats and scare goats. It is thought that the breed came about sometime in the 1880s when a man named John Tinsley brought four strange goats with stiff legs to Tennessee from Nova Scotia.
People in Tennessee gradually came to like these goats, not because they fainted but because they were calm compared to other breeds. Goats are notorious climbers and escape artists, and Tinsley’s goats seemed less likely to work at holes in fences or find ways to climb out of their enclosures.

On top of that, these goats were valued as meat goats. Fainting goats reproduce well and they have a short, stocky build that is highly prized among meat goat breeders. By the 1950s, fainting goats had spread around the eastern portion of the United States and breeders in Texas were working on producing larger, heavier fainting goats, which they referred to as “wooden-leg” goats.

Fainting goats, which were largely unheard of outside of farming communities, became such a curiosity that the population started growing rapidly. During this time, a few breed registries cropped up in an effort to preserve the purity of fainting goat bloodlines. Two of those registries are still around today: The International Fainting Goat Association and the Myotonic Goat Registry.

Today, there are a variety of reasons to keep fainting goats. Some still enjoy raising meat goats, and others love keeping them for their fun-loving, laid-back personalities. Breeders of registered fainting goats see their work as a conservation effort — working to keep this unique, all-American breed of goats around for future generations to enjoy.

See what it looks like when fainting goats faint in the video below.

Wow! I love this