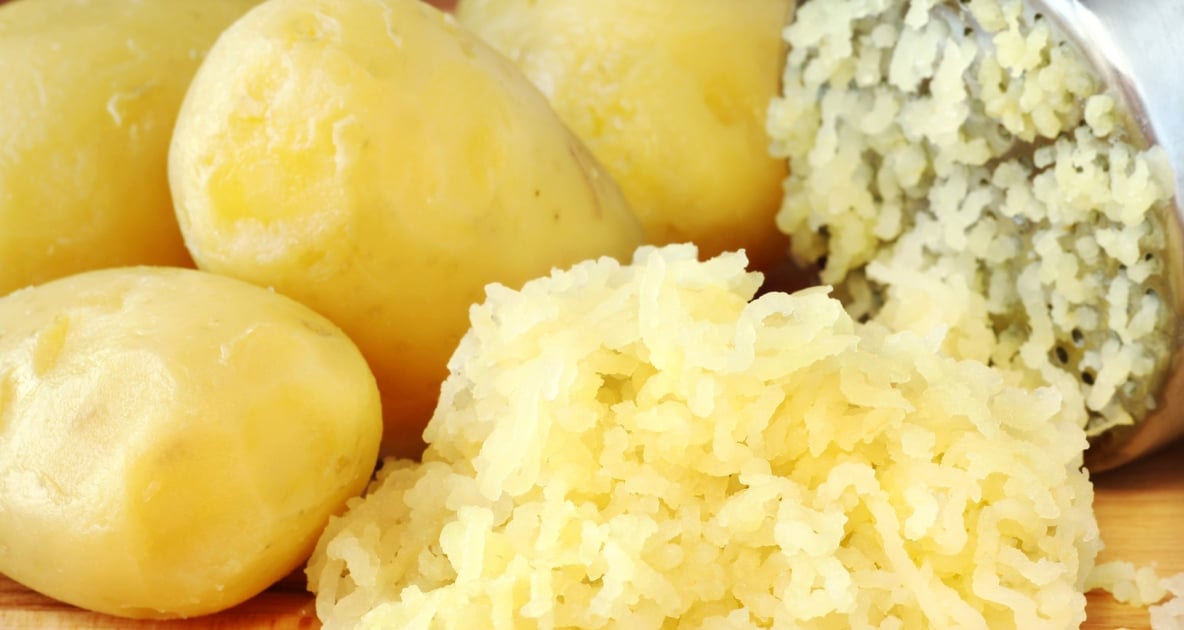 Many of us have a kitchen full of gadgets. Some we use daily, and some are hiding in cupboards because we have no idea how to use them. Sometimes it’s good to take a good long look at the gadgets you own and determine what’s really useful and what is just taking up space. If you own a potato ricer but were never sure how or why to use it, hang on to it! Here’s why.

What is a Potato Ricer?

A potato ricer is a kitchen tool that’s been around at least since the beginning of the last century, with various improvements being patented in 1909, 1939, and 1946. It’s a simple, two-handled kitchen tool, joined by a hinge, with a plunger on one handle, and a perforated receptacle on the other. The plunger fits into the perforated receptacle, and when the handles are squeezed together, it forces whatever food you put into it through a series of small holes. And those holes will transform your lumpy mashed potatoes into a thing of beauty.

It’s Called A Ricer, But It’s For Potatoes

First and foremost, a ricer is for potatoes. If you’ve ever used a ricer you would most likely agree: you don’t know how you ever made mashed potatoes without one. The reason mashed potatoes made with a ricer are so good is all about the mixing. Mashed potatoes benefit from as little mixing and agitation as possible. Over-mashing or over-mixing results in the development of gelatinized starches which are released from the potato cells, and bind together into something most often compared to glue or wallpaper paste. People tend to combat gluey mashed potatoes with more mixing and greater additions of fat and dairy, but this usually just makes things worse.

The ricer, however, is gentler on the potatoes, providing an even mash, and preserving more of the integrity of the swollen starch cells, without as much of the stirring and mixing as other methods.

The first step, however, in making great mashed potatoes is choosing the right potato. Starchy potatoes like Russets, were born to be baked or mashed. So when making your next batch, be sure you select the right potato for the job.

Check out this quick video of a potato ricer in action!

More Than Potatoes
A ricer does more than mashed potatoes, though. Consider it a food press that does double duty for many things that a food mill does:

Ease of use: Very easy.
Where to buy: Any shop that sells kitchen gadgets, or online such as Amazon.
Pricing: Ranges anywhere from $8 – $50.

Let this be your rule of thumb: if you can mash it, you can rice it! 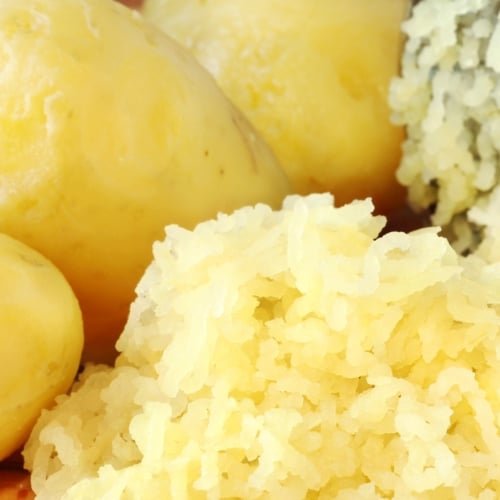 Been a long long time been hoping for a ricer as a present, never did, so got my own, wife now not so happy l didn’t get one for Xmas earlir

Auto correct got me.
Don’t wait too long between grating, “ricing” and frying.

We use ours to press all the moisture out of our freshly grated potatoes for making hash browns. Too much water turns your hashers into a soggy mess. The ricer allows the potatoes to get super crispy! We also tested rinsing or not rinsing before “ricing”. We prefer not rinsed as they have more starch which lends to an even crispier brown. Just don’t wait too long between grating, rinsing and frying.

If a person has is mature of age and has arthritis in their hands – is the ricer too difficult to use?

Hi Patricia, Because the potatoes are cooked and soft, and you use two hands, it’s not hard to press (not like a garlic press is). You should have no problems.

I am a senior, have a ricer, and love the texture of the mash. However, and this is the only con…it’s too small a chamber, and I DO find that shoving that mass through the screen is difficult and…fiddly. I’m looking into purchasing a food mill at this point…bigger bowl, stainless, and often come with a variety of screens. Perhaps that is a solution for you, too.

Besides using the special hot griddle, the potato ricer has to be one of the best inventions to use to rice potatoes for Norwegian Lefse!

Hmm, what about hashbrowns? I’ve never used a ricer so don’t know what a tater looks liked after it’s been “riced”.(<:

My grandmother used to make the best mashed potatoes and she always used a ricer. But now she’s dead. Oh well.

The kids laughed at my request for a potato ricer for Christmas. But may I say they love my mashed potatoes.

Hi Kathryn White – great! It’s so true that they do the best job! Thanks for commenting. 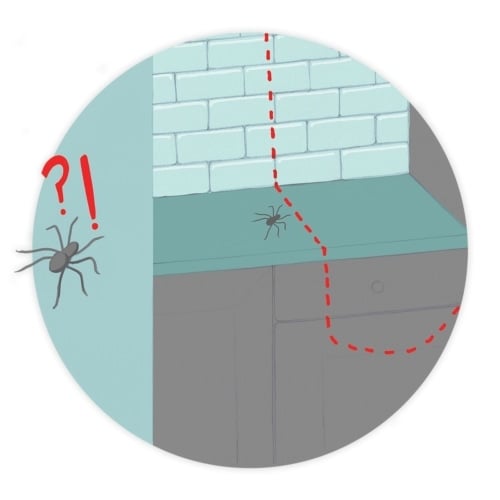