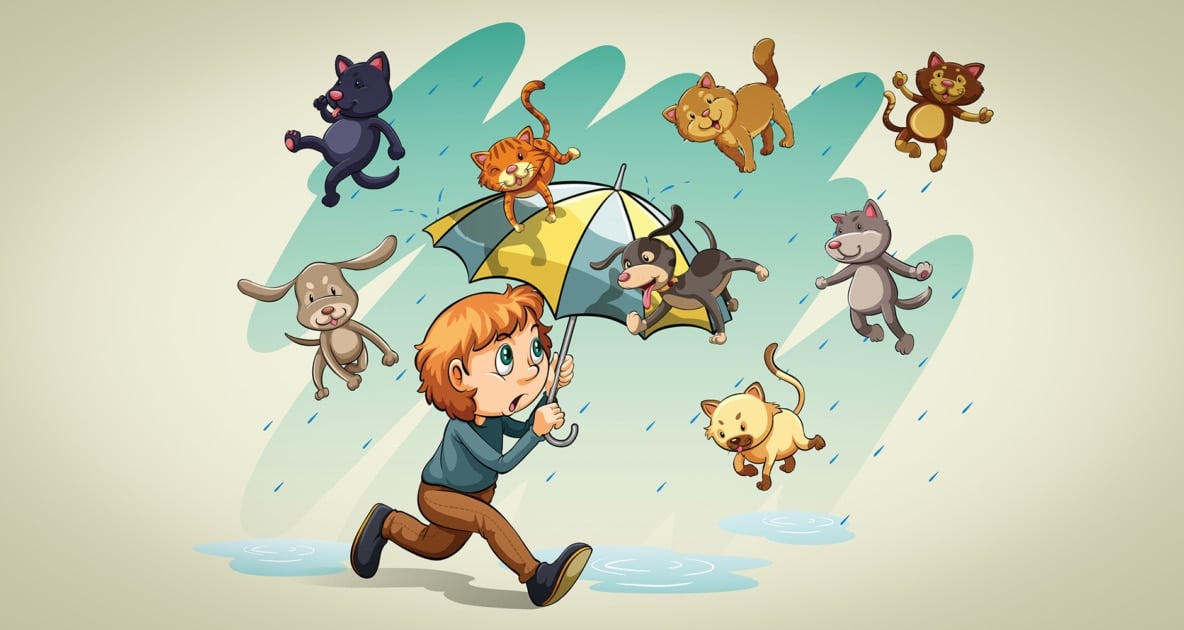 It’s an expression we use often: “Wow, it’s raining cats and dogs!” But can it really?

Of course, we all know that it isn’t possible for the clouds to open up and hurl household pets to the Earth. So why does the English language include this oddity?

One possible explanation for the figure of speech is that, during the Middle Ages, heavy rains caused the streets in England to flood. These “raging rivers of filth,” as Farmers’ Almanac contributor Richard Lederer described them, were generally filled with trash and waste, including the corpses of stray cats and dogs.

Lederer has also suggested that there may be a more folkloric explanation for the phrase “raining cats and dogs”:

In the dark Ages, people believed that animals, including cats and dogs, had magical powers. Cats were associated with storms, especially the black cats of witches, while dogs were frequently associated with winds. The Norse storm god Odin was frequently shown surrounded by dogs and wolves. So when a particularly violent storm came along, people would say “It’s raining cats and dogs,” with the cats symbolizing the rain and the dogs representing the wind and storm.

There have, however, been verified reports of animals falling to Earth during severe storms. So, while it doesn’t really rain cats and dogs, it may actually rain fish and frogs. No one really knows for sure how or why this rare meteorological phenomenon happens, but the most widely suggested hypothesis is that strong winds, such as a tornado or waterspout, suck the creatures out of ponds and rivers and carry them to dry land.

Stories of animals raining from the sky, technically called “non-aqueous rain,” have been with us for thousands of years, including one account in the Biblical Book of Exodus, where one of the plagues called down upon Egypt is a rain of frogs. As fantastic as these stories sound, there have actually been several more recent incidents of non-aqueous rain around the world.

A friend moved to Amsterdam because of his job & naturally, took Dutch lessons. He learned that, instead of ‘raining cats & dogs,’ the Dutch literally translated to: ‘It is raining small, domestic animals.’

The Exodus account says the frogs came up from the river, not the sky.

I remember this saying from when I was growing up, but I’m from the Northern Great Plains area so I also grew up saying it was raining like a cow peeing on a flat rock.

Raining cats and dogs from where I come from (South London) means the cats and dogs would sleep on the beams of a Thatched house, that’s where the heat was. They would slip on slimy wooden beams and fall. Hence the saying. Nothing actually to do with rain…

This is the story I know of and the most plausible. Especially when it rained hard and the beams were even more moist, or if rain was coming through. I like that picture better than dead animals floating down the streets. Thanks Janine. 🙂

Frogs did not “rain down” on Egypt. They came up out of the Nile and the waters of Egypt. Exodus 8:6.

Raining cats and dogs is one thing, but hailing street cars and taxis can be worse!

As rose said above, that was what we were told in school in the 50’s the reason for the expression. I had a tendency to believe it then and now having been to England and seen thatched roofs still there..

i don’t know if it those really rains cats in dogs …?
probably not

To prove it rains cats & dogs, just look out on the street. There are “poodles” all over. lol

yes it can in a tornado

It was raining really hard one day and my husband says”Did you see that fish?”I asked him if he was on drugs!! He proceeded to go out in the downpour and brought a bluegill back in the house with him!!! I was flabbergasted to say the least.

Hi Mike and Shalyn,
The origin story that you both mention has been around for a while, but language expert Richard Lederer has called this idea “dubious.” He wrote all about it on his website about a decade ago.

I must concur with Mike Gamble. I have heard the same story of the animals burrowing in the thatched roof, which became slick with rain causing them to slid out of their roof-top nests as though falling from the sky.

I was always told that the saying originated in Ireland or other contries where Thatched roofs (roofs made of straw) were common. In the heat of the summer, animals would burrow into the straw and sleep in their little roof top nests. If a heavy rainstorm popped up, it would wash the animals off of the roof. If you were looking out the window, it would literaly be “Raining Cats and Dogs”…

As a young man growing up many times after heavy rain storms I have seen small tiny frogs all over the ground, I had always heard that they were rained down from the sky. Someone once said that as the sun pulls water from the streams and ponds it also takes up the small frogs and rains them back down again. I don’t believe this theory but it worked for me as a child. Also I have seen many night crawlers on the ground following rain storms. Does anyone else have a theory on this.

Very interesting, I have wondered where the phrase raining cats and dogs came from and as a owner of a black cat I too have always believed that my Midnight had mystical powers, she showed up at my doorstep right before Halloween nine years ago at 12:00 (midnight), and got me to let her in when I was’nt a cat person, I’ve loved her ever since.

When I lived outside Dallas around 1980 it rained small shrimp that were in the hail stones. Made front page news that I had to send to my family in Philly. Never saw anything like that since.

Since foreclosures have increased, it has indeed rained cats and dogs on the county road. My dog and several of my cats are drops, as was my late buck rabbit. One, Midnight, was actually on the roof (I am downhill of the road). Whether such a phenomenon caused the saying, I don’t know, but it surely applies now. 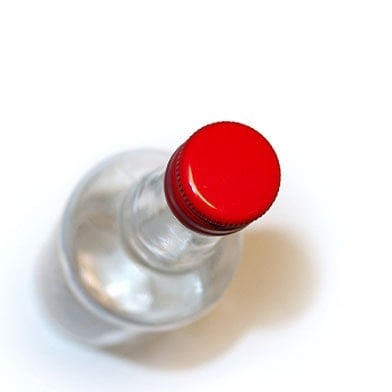