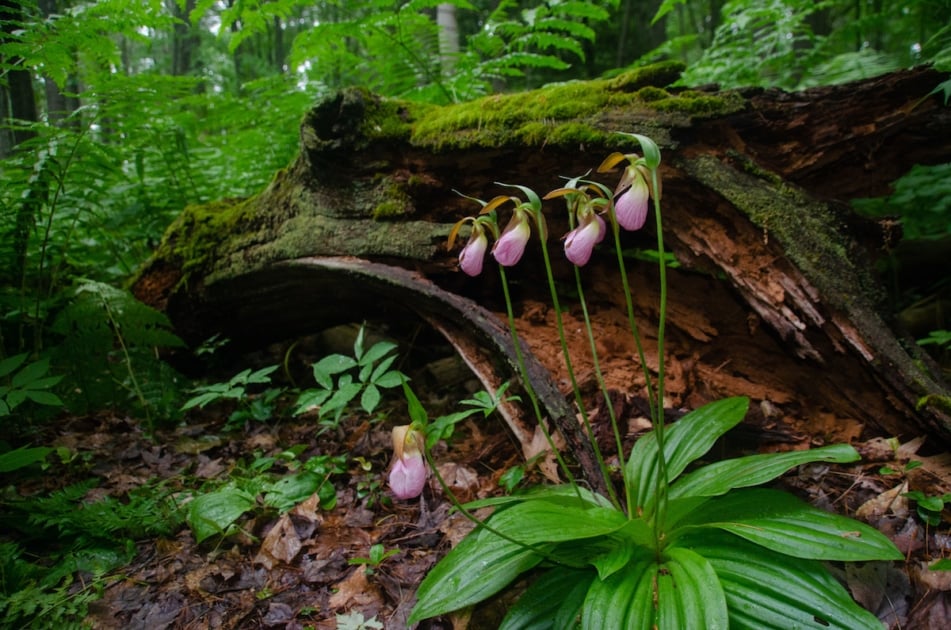 Lady’s slippers are some of North America’s most unique and unusual flowers. Although if you’re a fan of orchids, you’ll find their shapes and colors familiar since these flowers are a type of wild native orchid. If you’re ever hiking in the New England woods and happen upon a group of these interesting-looking flowers with their three single leaves bursting forth from the ground, it’s perfectly normal to get a little excited. Because they’re a protected wildflower, they can’t be uprooted and taken home to plant, but there are ways to still invite them to your garden.

Why Are They Called Lady’s Slippers?

Lady’s slippers come from the Cypripedium genus, which consists of 58 different species of hardy orchids scattered all over the northern hemisphere. The genus name comes from two Greek words: cypris, which refers to a Greek myth about Aphrodite, and pedilon, which means “sandal.” This is partly how the delicate flower got its name—because it resembles a tiny’s lady’s slipper or moccasin. You’ll often hear them sometimes called “slipper orchids” or “moccasin flower.”

The pink lady’s slipper, Cypripedium acaule, is the state wildflower of New Hampshire and the provincial flower of Prince Edward Island, Canada.

The Many Colors of Lady’s Slippers

Lady’s slippers are not always pink. Another variety found in the east, with a range stretching as far west as Minnesota, is the showy lady’s slipper (Cypripedium reginae). This is a pink and white bloom, which is also Minnesota’s state flower.

The Cypripedium parviflorum is a yellow variety that grows wild in the eastern half of North America along with western portions of the U.S. and Canada that include the Rocky Mountains and Yukon regions.

These flowers have an interesting tale behind them. While it’s a common bit of folklore among Native Americans in the east, it also pops up in western folklore, too. Some attribute this story to the Ojibwe people, who lived in areas around the US Great Lakes and Canada.

According to the legend, one winter had been a particularly hard one, with lots of people falling ill. They were in desperate need of medicine, but most of the men who would normally make the journey were too sick to go, so a woman snuck out of the village one night to get help for her people.

The woman made it to the next village, got the medicine, and started her trip home—but the snow and ice made for a difficult journey. She kept going, but as she drew closer to home, the journey grew harder, and eventually, she found herself unable to walk. People from the village rescued her and brought the medicine back, saving not only her life but the lives of those who had fallen ill. And, as the legend goes, tiny slipper-like flowers grew in the places where her moccasins left prints in the snow—a reminder of her bravery and courage.

Want more flower lore? Read the stories behind these flowers.

The pink lady’s slippers that grow wild in New England are listed as endangered, threatened, or given “special concern” status, so it is discouraged to pick or dig them up. The reasons are that the plant can’t rejuvenate itself once picked, it takes many years to grow from seed to maturity, and they have a low rate of survival when transplanted. Therefore, great care is taken to protect them.

Regulations on picking or transplanting lady’s slippers vary from state to state, so it’s best to simply leave them alone if you encounter them in the wild.

Growing Lady’s Slippers In The Garden

Because picking or digging up native lady’s slippers is discouraged, we recommend obtaining a plant from a specialized grower.

Depending on the specific species, most lady’s slipper orchids will do well in hardiness zones 3 through 8. They’re a hardy rhizome that prefers cool areas and plenty of shade. If you can give them a spot in your garden with dappled light that mimics a forest setting it will help them flourish. They prefer well-aerated and well-drained soil—nothing soggy that may cause the roots to rot.

When planting, take care not to bury them too deep. In fact, rather than “planting” these orchids, many growers will often simply stretch the bare roots out over the surface of the soil, and then cover them with a light layer of mulch or shredded bark. If you do choose to plant them, keep the base of the plant about 1/4 to 1/2 inch below the soil line, and no more.

While lady’s slippers can be a little tricky to grow, the results are worth it. For anyone who is into woodland or wildflower gardening—or a mixture of both—these are a must have!

Plants with clay pots should not stand on floors easily damaged by water. Clay absorbs moisture and can ruin the area it touches. Be sure to use a pan or tray underneath.
More hints & tips 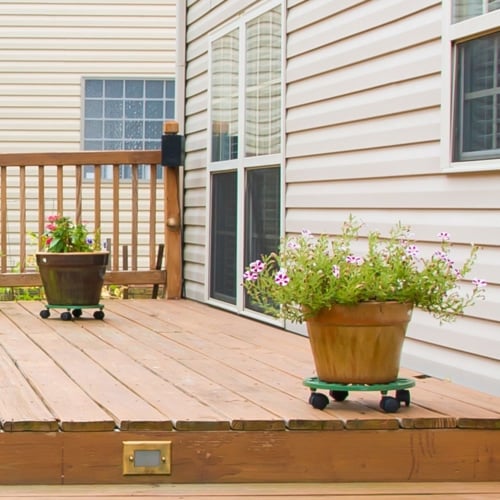