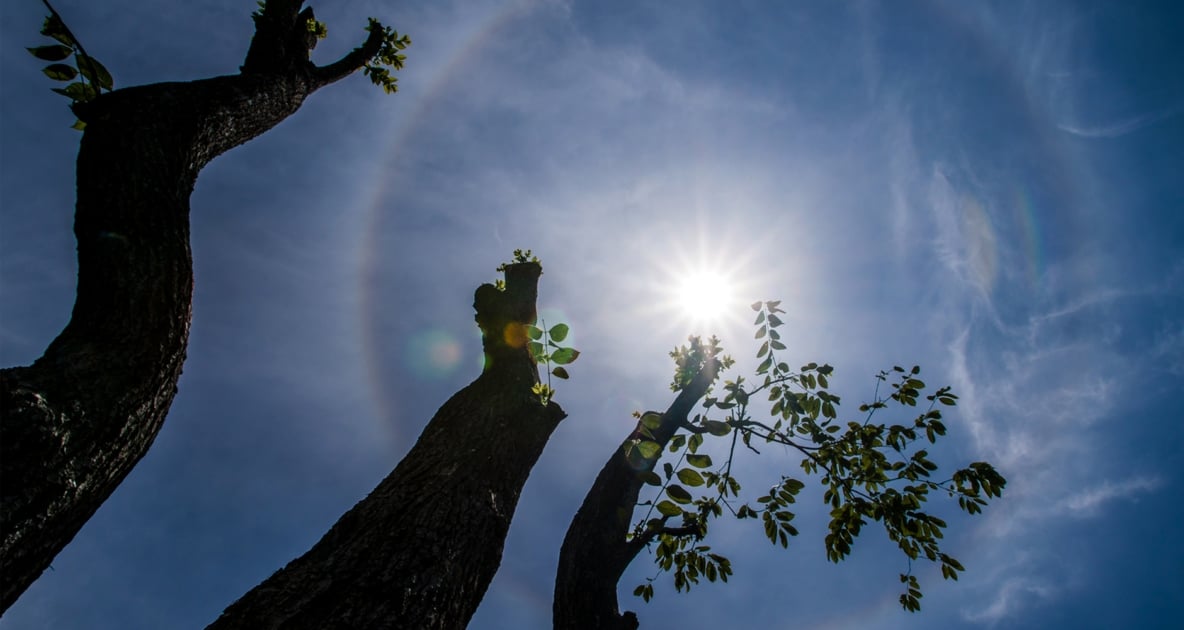 Sometimes there are sights in the sky that will grab your attention because they are so unusual and obvious. And such is the case when a halo forms around the Sun or Moon. You’ve most likely seen such a halo, but what about a Sun pillar or Sun dog? Each of these sights is caused by the state of our atmosphere, and appearance-wise, they look quite different. But they all have one thing in common: ice crystals.

Halos (pictured) are the result of the refraction or bending of sunlight or moonlight by thin, high, icy cirrus clouds. These clouds appear at altitudes above 20,000 feet, where air temperatures are always below freezing, even during the middle of the summer.

The most commonly seen halo is the single one making a 22-degree circle around the Sun or Moon, often brighter on the top and bottom. This you will find by stretching out your arm and fingers; when your thumb covers the Sun or Moon, your pinky will touch the halo. When looking for solar halos you must, of course, be careful to shield your eyes from the direct sunlight.

All ice crystals are basically six-sided (hexagonal). The differences in crystal shapes account for some of the variety of phenomena that are observed. This type of halo is caused by crystals that are the shape of small columns or plates.

Halos play a big role in weather lore. Sailors who saw a halo or ring around the Sun or Moon often believed that unsettled weather was 18 to 24 hours away.

Halos are for the most part colorless but sometimes they appear lie pale rainbows with red on the inside.

On rare occasions, a second, larger, 46-degree circle may also form and, if the ice crystals in the clouds are just right one may also sight other curious effects such as arcs and brightly colored blobs of light on either side and at the same elevation as the Sun and lying outside the halo, called parhelia, mock Suns or “Sun dogs.”

Sometimes, right around sunrise or sunset, you’ll see a narrow, vertical shaft of light extending straight up from where the Sun (low on the horizon). On rare occasions, the same phenomenon might be seen with rising or setting of the Moon, though the vertical light shaft is not as bright or pronounced. Such a spectacle is referred to as a Sun pillar

Pillars are not actually vertical light rays. They develop as a result of ice crystals slowly falling through the air; the collective glints of countless millions of crystals. Air resistance causes these crystals to lie nearly flat much of the time as they flutter down to the ground. Unlike halos, the crystals do not refract or bend light, rather they reflect the rays of the Sun (or Moon) off of them. Those crystals that are properly aligned create the pillar effect.

They usually appear 5° to 10° tall and sometimes even higher. Your clenched fist, held at arm’s length measures roughly 10°. Pillars can sometimes appear even longer and brightest in the moments just prior to sunrise or just after sunset. They can take on the colors of the Sun and clouds—they can appear white and at other times shades of yellow, red or (infrequently) purple.

Look for Sun pillars when either the Sun or Moon are low on the horizon when cirrus clouds are present. They are, however, rather uncommon.

Take a look at this amazing image shared with us by Facebook fan Kristy Marie Silvestro of Ohio. Kristy captured this image of a classic 22-degree halo, accompanied by two Sun dogs embedded within the halo on either side of the Sun. Amazing!

lp records are on the way back.

In a microwave-safe bowl, combine 1/2 cup each of water and distilled white vinegar. Microwave the mixture for about 5 minutes, or until it boils. Leave the bowl in the microwave until it has cooled enough to handle. Wipe down the inside of the microwave with a sponge. The solution makes its easier to wipe off stuck on, splattered foods. Lemons can also be substituted for the vinegar.
More hints & tips 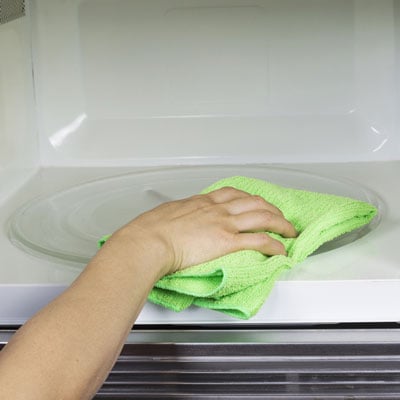