1. (TIE) THE BLIZZARD OF 1993 a.k.a. “Superstorm ’93.” This storm was described by the National Weather Service as “One of the worst storms of the 20th century.” The onslaught took place during March 13th and 14th, and brought widespread, heavy snows, ranging from 17 inches as far south as Birmingham, Alabama, to 56 inches at Mount LeConte, Tennessee. To the south and east of the storm’s track, widespread severe weather occurred, with powerful thunderstorms and dozens of tornadoes across the Deep South. The total death toll on land was at least 270, with 48 more lost at sea. Fatalities were reported from Florida to Maine. The economic losses were between three and six billion dollars. For the first time, all the major airports on the East Coast were closed at the same time during this storm.

1. (TIE) HURRICANE KATRINA OF 2005 –– the costliest and one of the five deadliest hurricanes in the history of the United States. The third-strongest hurricane on record that made landfall in the United States. Katrina formed on August 23 and caused devastation along much of the north-central Gulf Coast. The most severe loss of life and property damage occurred in New Orleans, Louisiana, which flooded as the levee system catastrophically failed, hours after the storm had moved inland. The hurricane caused severe destruction across the entire Mississippi coast and into Alabama, as far as 100 miles (160 km) from the storm’s center. Nearly every levee in metro New Orleans breached as Hurricane Katrina passed east of the city, subsequently flooding 80% of the city and many areas of neighboring parishes for weeks. At least 1,836 people lost their lives. The storm is estimated to have been responsible for $81.2 billion (2005 U.S. dollars) in damage, making it the costliest natural disaster in U.S. history.

2. HURRICANE CAMILLE OF 1969
This hurricane made landfall on the Mississippi coast on August 17th, and was later declared, “the severest storm . . . the most concentrated destructive power. . . of any hurricane ever to make a landfall on a built-up portion of the United States mainland.” Its central pressure upon landfall was measured at an astonishingly low 26.84. Hurricane winds reached 200 miles per hour, ranking it at 5 on the 1­5 Saffir-Simpson Scale. Up until Camille, only one other category 5 hurricane (the Florida Keys storm of 1935) had made landfall in the U.S. Camille produced a tide 25 feet high (based on the watermarks left inside a building at Pass Christian, Mississippi), caused 144 deaths, and nearly $1.3 billion in damage. Even though the powerful hurricane winds diminished after landfall, frictional drag wrung Camille’s tropical moisture out into heavy soaking rains and drenching downpours that lead to severe flooding on the James River in Virginia, drowning an additional 113 people.

3. THE GREAT GALVESTON HURRICANE OF 1900
This hurricane is on the weather record books as the most lethal American hurricane. In the years before this storm’s arrival on the Texas Gulf Coast, the residents of Galveston, had, for “aesthetic” purposes, gradually removed a 16-foot-high sand dune that might have protected them from what followed. When the hurricane arrived on the fateful day of September 8th, its floodwater was able to rush unimpeded into the city. A severe hurricane tide inundated this island city with up to 15 feet of water; over 6,000 people lost their lives, a number three times greater than a similar deadly hurricane that had struck Louisiana seven years earlier; 3,600 houses were destroyed; and property damage was estimated at $30 million.

4. THE GREAT LONG ISLAND/NEW ENGLAND HURRICANE OF 1938
On September 21st, a full hurricane of unknown force was churning northward in the waters off Cape Hatteras, North Carolina. It was expected to follow a normal path and gradually curve northeast away from land, and was thought to be moving at a normal speed. “Instead,” wrote David Ludlum, “it followed a congenial atmospheric trough of low pressure and accelerated from a normal 30 to 40 m.p.h. rate to a final dash toward land at a pace in excess of 60 m.p.h.” At 3 p.m. local time, this major hurricane crossed Bellport, Long Island, New York (where a barometric pressure of 27.94 inches was recorded), then moved out over Long Island Sound before making a second landfall near Milford, Connecticut. The storm then tracked to the west of New Haven and up the Connecticut Valley through Massachusetts and Vermont. Blue Hill, Massachusetts, had wind gusts to 186 m.p.h. Accompanying its passage was a massive forest blowdown, widespread floods, extreme coastal destruction, and a record tide that inundated Providence, Rhode Island. William A Cawley, who documented the storm, noted that along the beaches of Rhode Island, “the series of waves, each higher than the previous one, were lashed into a seething fury to the height of 30 feet.” There were up to 650 fatalities, and damage was estimated near $400 million.

5. THE BLIZZARDS OF 1888
There were actually two severe snow and windstorms that occurred during the winter of 1888. The first occurred from January 12th through the 14th, and was caused by a sharp cold front (a “blue norther”) that dropped rapidly south through the Dakotas to Wisconsin before finally sweeping across Texas, all within less than 36 hours. Temperatures dropped to -52°F. Over two hundred pioneers perished when caught abroad after a mild, sunny morning. Tens of thousands head of cattle and other livestock were killed. Then, two months later, it was the East’s turn. Only the legendary Great Snow of 1717 has achieved such an enduring reputation as this blizzard, that raged from March 11th through the 14th. A storm system, blocked in its normal northeastward movement up the U.S. East Coast, stalled in the vicinity of Block Island, Rhode Island, on the 12th and most of the 13th. The end result was a blinding, crippling blizzard that killed an estimated 400 people, and left much of the Northeastern U.S. in chaos. Snowfalls of 20 to 50 inches were common. More than a century later, the Great Blizzard of March 1888 is still the benchmark by which severe winter storms are measured.

6. THE GREAT TRl-STATE TORNADO OF 1925
This intense tornado adversely affected Missouri, Illinois, and Indiana on March 18th, creating what still remains today as the worst U.S. tornado disaster. It traveled along a path nearly 220 miles in length; one of the longest known paths for any tornado. It carved a path of total destruction that was almost a mile wide in some places. This one twister passed directly through nine towns, and killed 695 people, including 234 at Murphysboro, Illinois, and 126 at West Frankfort, Illinois. About 3,000 homes were destroyed. By today’s standards, the property damage would be astronomical, but even then it totaled almost $17 million. Seven other tornadoes that were spawned on this same day raised the death toll to 792, with an additional 2,027 persons being injured.

7. 1816: THE YEAR WITHOUT A SUMMER
1816 has gone down in Almanac fame as the “poverty year,” and “eighteen hundred and froze-to-death.” It was comprised of a backward spring with record late snows (heavy snows fell in New England between June 6th and 11th), and an exceptionally cold summer featuring frosts in July and August. On July 4th, the high temperature at Savannah, Georgia, was only 46°F. Finally, there was a drought during early fall that culminated in a killing frost well before the end of September. “In all,” wrote weather historian David Ludlum, “a most distressing season for the rural economy of northern New York and northern New England.” But crop failures were widespread, not only in New England, but also across Canada and Western Europe. The apparent cause of this anomalously cold summer was the eruption of the Tambora Volcano, half a world away in Indonesia, in 1815. A tremendous cloud of fine ash and dust was ejected into the stratosphere, where it remained for a very long time. This ash significantly reduced the heat and light of the sun, and resulted in a cooldown throughout the Northern Hemisphere.

8. THE SAXBY GALE OF 1869
A powerful, tropical hurricane, moving northwest over the western Atlantic waters became a deep extra tropical depression–a sort of winter-type gale–as it passed over the colder waters of the North Atlantic. The eye of the storm made landfall on October 4th and 5th, in the area of the Maine and New Brunswick, Canada, border. The combination of this storm’s strong winds and excessive rainfall created one of the worst natural disasters for this part of the world. It was responsible for the death of as many as 100 people in New Brunswick and the surrounding areas. Rainfall records were set for much of New England, records that still stand today. This storm was also responsible for the world’s highest known tidal excursion, at the head of the Bay of Fundy. The storm got its name from a prediction made by Stephen Saxby of England, who had issued a prediction, nearly a year in advance, of the likelihood of a potent atmospheric disturbance for October 5th.

9. THE GREAT SNOW OF 1717
Four successive snowstorms-two of them minor, two of them of major proportions-fell within a ten-day interval (February 27th through March 7th), and left a snowfall estimated to be somewhere between three and four feet across much of New England. On the Post Road leading to New Hampshire and Maine, five feet of snow, with drifts of up to fourteen feet, was reported. Wrote Cotton Mather: “As mighty a snow, as perhaps has been known in the memory of man, is at this time lying on the ground.” There were no Sabbath services for two weeks at Mather’s church in downtown Boston, and in Framingham, Massachusetts, no public meetings could be held until the end of March. Mather composed a detailed account of the great snow, which was then sent to London for reading before the Royal Society. Later, this account appeared in one of the first publications of the Massachusetts Historical Society.

10. THE DARK DAY OF 1780
Immortalized by John Greenleaf Whittier (1807-1892), the poem entitled “Abraham Davenport,” vividly described this celebrated weather event that occurred over New England on May 19th. It was a day so dark that: “Birds ceased to sing, and all the barnyard fowls roosted; the cattle at the pasture bars lowed, and looked homeward. ” During colonial times, days when candles were required to perform noontime chores occurred in 1680, 1685, 1706, 1716, 1727, 1743, and 1762, but none brought such fear and reverence as that of the dark day of 1780. The mysterious obscuration was first reported at dawn over southwest Vermont, and it slowly traveled southeastward during the day. The place to last report this strange weather was Barnstable, Massachusetts, on Cape Cod, in the late afternoon. In Boston, the atmosphere darkened perceptibly after 9 a.m., until the reading of the newsprint became difficult outdoors. Many New Englanders believed that the Judgment Day was at hand. The cause was later attributed to a combination of an extremely dark overcast mixed with thick smoke from nearby forest fires, as well as to fright and superstition.

Use kraft paper or butcher paper to cover the kids' table at Thanksgiving, and set out crayons and markers for them to draw and be creative. It keeps them busy and makes clean up a snap!
More hints & tips 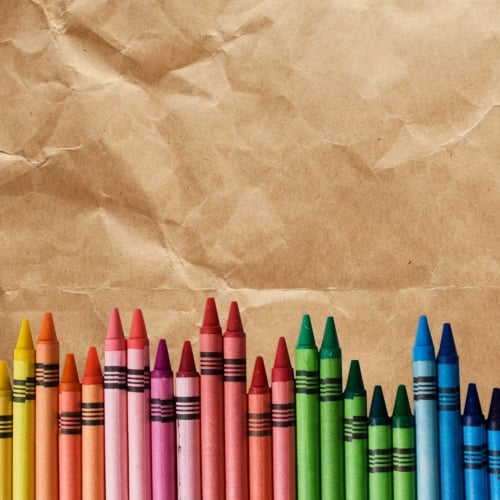