Here’s the scenario: you’re running late for work, but when you get outside, your car is encased in ice. It looks more like a glazed donut than a vehicle. How can you get on your way as quickly as possible when you don’t have time to let the car’s defrost… defrost?

We often get questions about the best de-icing methods:

I’ve heard that a mixture of vinegar and water in a spray bottle can safely melt ice off your windshield so you don’t have to chip it with an ice scraper, but my husband says it will pock my windshield. Help!

The vinegar and water deicer recipe seems to circulate around the internet every winter and early spring. While vinegar may not pock the windshield (remember, vinegar is stored in glass bottles), it may prove corrosive to your vehicle’s chrome finishes and paint — it is acid, after all. And it’s not very effective at melting ice that has already formed.

So what can you do? If you can’t take preventive measures, such as draping a tarp, large piece of cardboard, or blanket over your windshield before bad weather moves in, and you don’t have a garage to park in, here are some effective DIY solutions to loosen that nasty ice, other than running the vehicle continuously until it melts (which isn’t very environmentally friendly).

The bad news is that when ice attacks your windshield, it’s mostly a waiting game –waiting for warmer temperatures!

We always check the weather forecast. Before the snow or sleet arrives, we raise our blades & spray all windows with alcohol. All precipitation just slides off ???

I have used a large (1 or 2 Ltr) bottle of luke warm water to melt the ice fron the windshield and run the wipers immediately. I have done this on my personal cars and it has worked. This is fast, non corrosive and practical. I keep the bottle in the car and refill and re-use as needed.

at least in this county, I would be concerned about vodka and water being the same as carrying an open container

Looking for a way to stop ice/snow build up on my metal gazebo …..thanks

The snowier the better

Love the snow and winter

Walmart sells a spray bottle of, and a gallon refill bottle of windshield de-icer. It works fast and wonderful. A little goes a long way too. We keep a spray bottle in each car and by it by the gallon for refills, much cheaper by the gallon. I have been using it for five winters now and not damage to windshield, paint, or chrome. Still need to let defrosted get warm to clear windshield fog on the inside though.

Rubbing Alcohol works as well with 1 part water and 2 parts Rubbing Alcohol. Since rubbing alcohol freezes at a -185 degrees, it really works instantly. However, if snow or ice is on top of your car, it is your responsibility to remove it before traveling on the road. If any snow or ice on your car comes off and hits another driver’s vehicle and does damage, it will be your fault and you will have to fix that persons vehicle.

Drop a mini marshmallow inside the bottom of your waffle cone before scooping in the ice cream to avoid leaks as it melts. The marshmallow will absorb the ice cream and you'll have a tasty treat at the end!
More hints & tips 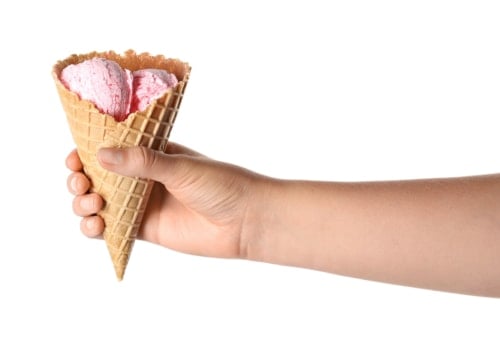