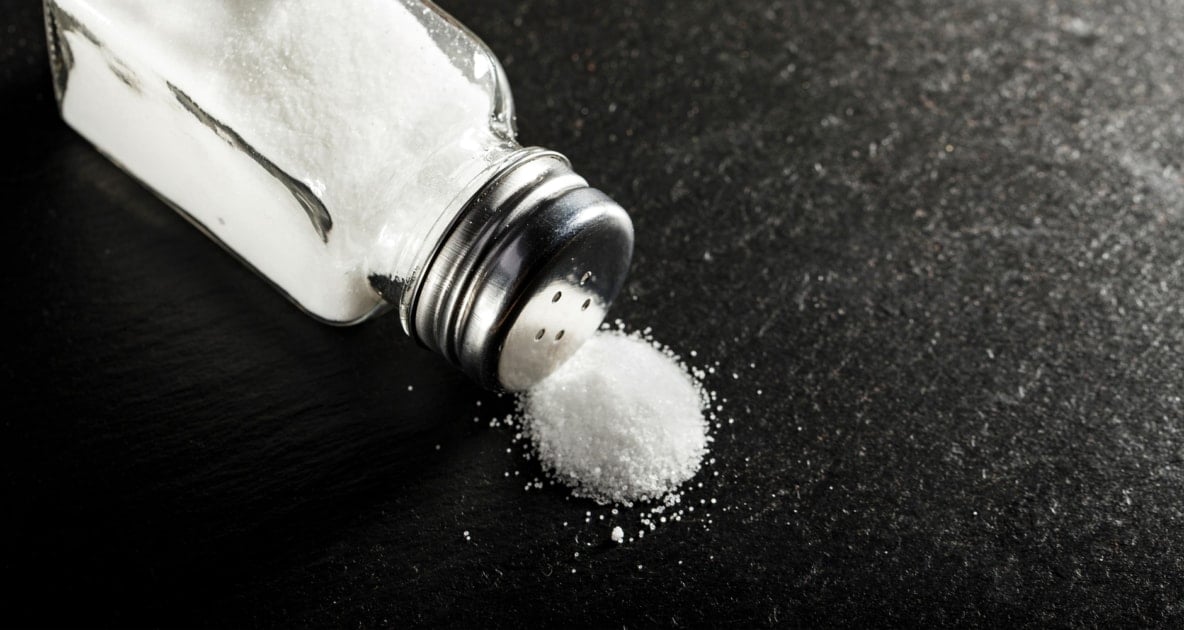 Salt in its natural state is rich in nutrients and essential to our well-being. When natural salt is stripped of its minerals and chemically altered, it is no longer a real food, but an additive which creates unhealthy imbalances within our body.

For many, the issue of salt is about its effect on our health. Dr. Josh Axe states, “Doctors and scientists have long been telling us to reduce our salt intake, so it may be hard to swallow when I tell you research shows that a low-salt diet doesn’t reduce high blood pressure.” Dr. Axe cites a study published in the British Medical Journal that included people with a family history of high blood pressure. The participants restricted their salt intake for eight weeks. At the conclusion of the study, no differences in blood pressure readings were found among the participants. Dr. Axe further explains that “The type of salt you consume does make a world of difference for your health.”

So what are the nutritional and health differences between sea salt and refined salt?

Although refined table salt is produced from sea salt it is so highly processed that the end-product leaves it alarmingly void of its natural nutrients. The naturally-occurring minerals, essential to our health are stripped from the harvested sea salt. Aluminum and other additives are used to dry the salt. The salt is then processed under such extreme heat that its chemical structure is altered.

To replace the stripped iodine, potassium iodide is added to make the salt “iodized.” Stabilizers are added and the substance is bleached white. Refined salt is 99% sodium chloride and devoid of its vast, original, trace mineral composition. Sodium chloride interferes with the transmission of nutrients to the cells in our body and causes electrolyte imbalances. It can also cause water retention and inflammation. Like refined sugar, refined salt, another highly processed, unnatural substance, creates addictive salt cravings in many people, while increasing the likelihood of disease.

Cutting Back on Refined Salt

Cutting back on refined salt requires a concentrated effort. If only it could be as simple as avoiding the salt shaker on the table. It has been stated that 90% of the foods Americans eat contains refined salt. Since salt is used to enhance flavor, preserve food, and increase shelf life, it is an additive in most commercially prepared and packaged foods. Some commercially prepared foods contain more refined salt than others, so it’s important to evaluate the foods we eat and replace those high in sodium chloride with healthier options. Fast foods, processed foods, and snack foods: crackers, chips, salted nuts, and pretzels are the most obvious, but there are other foods high in refined salt that you may not have considered.

The best way to lower your intake of refined salt is to avoid processed foods and dining on fast foods. Instead, prepare meals at home using fresh meats and vegetables, and season with culinary herbs and spices, such as Mrs. Dash, and sea salt instead of refined table salt. Shop for no or low-sodium varieties when buying canned, frozen, or packaged foods. Purchase unsalted nuts and snacks or those salted with sea salt instead of refined salt (sodium chloride).

I use kosher salt to season while cooking, but sprinkle a little sea salt as a finishing/seasoning salt on food after being cooked. It adds good flavor, minerals, etc…
A sprinkle of ground or powdered pink Himalayan salt goes really nicely on fish.

Kinda have to remember that sea salt is much more expensive than say kosher or another refined salt, and it doesn’t add as much flavor while cooking. So when something (say salt in pasta water) need to be salted when cooking, it makes more sense to use a less expensive salt, and a small amount of a more flavorful natural salt on cooked food.

This is some really good information on the uses of different kinds of salt.
http://skillet.lifehacker.com/the-differencedifference-between-salt-types-and-when-t-1711038026

Low sodium levels can be a bad thing. Both my mother and grandmother were told by their doctors that they were sodium deficient. It turns out they were drinking too much water and thus flushing the nutrient and associated electrolytes from their systems. They were following the general 8×8 rule of water intake or eight, eight-ounce glasses of water per day. Apparently as with all things, in “general” advice is only meant as a fuzzy guideline by which we should individually adjust according to our calories per day, age and lifestyle.

Btw, as an afterthought — Please know that I’m NOT suggesting it is ‘safe’ to consume higher doses of Himalayan salt but Himalayan salt does not have the same negative side effects affiliated with high salt intake that other salt sources do. Sorry for any confusion there.

Reputable holistic physicians seem to agree that Himalayan salt is probably the best. I switched to that and have found it to be amazingly delicious. It has 85 minerals (the most you can find in any salt) and it is all natural. Unfortunately, the salt that is sold today (regular) has been tampered with so badly that it has no nutritional value whatsoever. You can find it at my places since it is growing more popular. I personally find it is more nutritious than sea salt but that is based on the research I’ve read. Whether that is accurate, I can’t say but I do respect those who have researched and provided the documentation to support their findings. I love, love, LOVE salt and with Himalayan it is not as dangerous as table salt so one can use more of it without the negative effects that accompany the use of table salt. That’s my 1 cent, fwiw. Thanks for the article!

Sea Salt is better than table salt, but Sea Salt from ocean sources now are contaminated because the Ocean is contaminated. Better sources are from ancient Sea beds such as those in Utah – brand called Real Salt is fantastic and another mined source of ancient sea beds is Himalayan Salt. So in my opinion try to go with mined sources from underground that are not refined such as Real Salt and Himalayan salt. We have switched and both of us have had drop in blood pressure and more energy.

Jeff if the doctor said your sodium level was too low how would that be a bad thing?
Most like some salt, and yet those who need to limit it, do so for the sodium content. Refined salt as noted has some 900 mg. of sodium. Sea salt has between 600-700 mg. You made no mention of Kosher salt. It has the lowest at 300-400 mg. It is also cheap compared to sea salt. I’ve been using it for about 10 years now. A few years ago having some lab work done as apart of a normal check-up, My doctor noticed my sodium levels were low and how I needed to take in more salt. I attribute that to not only my use of kosher salt but also my avoidance of many processed foods.

Good Day, this was a wonderful and informative article, I knew all salt was from the sea, but was not quite aware of the “refined” salt we generally use. I lived in Japan for a couple of years, and had give-up my salt-shaker years ago. Thank You

I use Himalayan pink salt. However, my husband continues to use the refined salt. I’m trying to get him not to use it, going so far as to remove it from the table and spice cabinet. I want to throw it out, but don’t want to upset him.

Most like some salt, and yet those who need to limit it, do so for the sodium content. Refined salt as noted has some 900 mg. of sodium. Sea salt has between 600-700 mg. You made no mention of Kosher salt. It has the lowest at 300-400 mg. It is also cheap compared to sea salt. I’ve been using it for about 10 years now. A few years ago having some lab work done as apart of a normal check-up, My doctor noticed my sodium levels were low and how I needed to take in more salt. I attribute that to not only my use of kosher salt but also my avoidance of many processed foods.

what ABOUT KHOSER SALT I USE THIS SALT FOR EVERYTHING?

Thank you for this information. We currently use sea salt. I like the taste of it better. Marilyn Dalton I will start using it to gargle with daily. Tina , I never knew that idolized salt causes thyroid cancer, good to know. Thank you for all this helpful info. God Bless

Thank you for this information. We use sea salt a lot. We also just finished using kosher salt. But with this information we will be using more sea salt. In response to Marilyn Daltons comment I will start using sea salt to gargle and rinse. Could definit

Thank you for this information. We use a lot of sea salt already. Just got through using kosher salt. Marilyn, I will use sea salt to gargle with could use the savings on dental Bill’s. Thank you for the additional info Marilyn. Debbie D

Problem is: Which name brand should we use. The Grocery Stores only have a couple of brands and we can’t tell which is the right one to lower BP. There’s too many to choose from and we get bombarded with CHOICES!!!!!

ALL OVER THE WORLD WE PUT OUR WASTE CHEMICALS, SANITARY, ETC, INTO OUR WATERWAYS. DOES IT NOT SEEM LOGICAL THAT SEA SALT WOULD ALSO CONTAIN THE RESIDUAL CHEMICAL? SALT MINED UNDERGROUND IS BROUGHT TO THE SURFACE,GROUND TO THE CRYSTAL SIZE WE DESIRE, IODINE ADDED,

The Thyroid gland naturally uses iodine in salt to produce hormones. Sea salt has this natural iodine. No added chemicals or processing. With the use of “iodized salt” or processed salt incidences of Thyroid cancers have increased.

Gargling with sea salt has cut the bacteria in my mouth better than regular salt. Great for keeping gums healthy. It cut down on my dental bills.

My wife over salts everything. When I ask her why her response is “that’s what my mama always did”. It doesn’t do any good to remind her that her mother always complained about being sick and never feeling well.

Salt is salt, no matter what form it takes! Like everything else in life, moderation is key!

Use an old curtain rod as a stake to support a plant. Pull up the extension and the two can grow together.
More hints & tips