Walk into your local drugstore some time and take a look around. On every shelf you’ll find chemical remedies for just about every imaginable ailment, all developed by pharmaceutical companies who invest hundreds of billions of dollars in the name of making massive profits. It may seem hard to believe, then, that one of the most effective remedies in the drugstore sells for only a few dollars. It’s called witch hazel. And it has nothing to do with witches!

What Is Witch Hazel?

Witch hazel has existed in its commercial form for about 150 years but has been in use for much longer. It looks unassuming in its clear plastic bottle like it could be just plain water. Actually, though, it’s an extract produced from the leaves and bark of witch-hazel plants, Hamamelis virginiana—one of three species of deciduous flowering shrubs found in North America, both in the wild and as ornamental garden shrubs. The plant features shiny, green oval leaves ranging in length from just under two inches to just over six and arranged alternately along the branches. Yellow or orange flowers appear on the plant in the fall or winter, depending on the species. It occurs naturally throughout the eastern half of the United States and Canada.

What’s In A Name?

Though witch hazel’s healing powers are pretty magical, the word “witch” in its name actually has nothing to do with witches. Rather, it comes from the Old English word wiche, which meant “pliant” or “bendable.” The term had been used in the names of several plant species in Europe for hundreds of years before it was applied to the genus Hamamelis in North America. Other popular names for witch hazel include “snapping hazel” and “winterbloom.”

Its medicinal properties were well known to Native Americans, who used it for a variety of purposes, including to treat swelling, inflammation, tumors, and other skin ailments.  Puritan colonists got wind of the plant’s potential almost as soon as they arrived in North America, and began making their own extracts. By the mid-19th Century, companies had begun to produce extracts of the plant for commercial sale.

By now you’re probably thinking, “All that is well and good, but what does witch hazel actually do?”  Here is a list of 10 topical uses and why you should keep a bottle of witch hazel in your medicine cabinet:

Because of its healing properties, you’ll find witch hazel extract as an active ingredient in many over-the-counter applications, including acne preparations, hemorrhoid creams, aftershave lotions, treatments for poison ivy, and insect bites, and even eye drops.

Witch hazel extract can be easily made at home if you have access to the plant. You just have to boil about a pound of the twigs in two gallons of water. Because witch-hazel is so inexpensive and easy to get, though, most people don’t bother.

Freelancer Jamie McLeod contributed to research and information for this story.

I use witch hazel every morning and every night before my moisturizers! Been using it for years….(70 yrs old). Great stuff.

Is anyone using the bottled kind? What I’ve seen at pharmacy/store is usually sold as an astringent and is a low percentage Witch Hazel and water, I think.

Our veterinarian recommended witch hazel as a simple and inexpensive cleaner, with cotton balls, for dog’s ears.

I buy the alcohol free witch hazel at the health food store. Although it is more expensive it doesn’t burn when applied to raw skin.

Hi Gerri, no, unfortunately. You could try tea tree oil, which has anti-fungal properties but you have to mix it with a carrier oil like coconut oil. We also found these natural remedies you could try, but please check with your doctor first: https://www.healthline.com/health/home-remedies-for-toenail-fungus#oregano-oil

Witch Hazel is wonderful natural product. My family are Vermonters and it grows readily
throughout the woods, I learned from my grandparents all the wonderful uses of witch hazel. 1.wash your face to help with acne, ( young or old) makes for a beautiful complection,( never had acne as a teen!),helps with heat rash,all rashes really , good on dogs hot spot, and now that I am I the south, works great on fire ant bites, try it folks, just cause it’s cheap and not a perscription doesn’t mean it won’t work! Go for it ! No side effects !

I got in fireants over the weekend, poured witch hazel on the bites and no more pain!

I use bleach or ammonia on fresh ant bites. Just stand in the yard or dap it on, it helps the itch and pretty much no pus marks from the ant bites.

Ester, those really aren’t safe to use on skin. Better to switch to the witch!

Splashed on your face ice-cold, it’s a great after-shave lotion. Just store the bottle in the refrigerator.

A First Class article, thank you.
As I shall be 88 in six weeks time… do you think if I stood in bowl of Witch Hazel, this pain in my left hip, might just ease for a while?
NEF

Try Magnesium oil. It feels weird and kind of dry at first, not greasy, but it works wonders for my knees!

my friend is having iron treatments with an IV medication and some lesions have been popping up on her scalp. her hair is already fragile. can she dab some of it on those to dry up the lesions?

Hi Renae Randall, it’s best if you check with her doctor first.

My mother had an old piano with real ivory keys. It had been shipped around the tip of South America from New York to San Diego for her mother in the early 1900’s. She religiously cleaned the ivory every week but I never knew why.She always used witch hazel. Perhaps the witch hazel was supposed to prevent yellowing?

Could I use it on my goats? They have little bumps on there udder, it looks like they have been bit by an insect. I was told it could be a virus and to give them an antibiotic for 3 days. Would the Witch Hazel be safe to use on them?

‘@Frances, I discovered it years ago when my son’s pediatrician recommended it for prickly heat. I use it as a makeup remover/skin cleaner & you can get a bottle for 1.00 at most drug/grocery stores.

Can it be imbibed?

No, Chris, Witch Hazel is for topical use only.

Hello everyone, my skin breaks out and starts to itch terribly after just moments (literally) in the sun, will this help relieve the itching? In my sleep I scratch the skin and wake up with bloodied raw spots, will this help that too does anyone know?
Thanks for ANY help 🙂 Fran

Frances,
Witch-hazel could help this, but there are no guarantees. It certainly won’t hurt. Buy a bottle and give it a try. As mentioned in the article, it is very inexpensive, so you’ve got nothing to lose. Good luck!

Witch Hazel has been a stable in my home for over 40 years. My mother-in-law told me about when my children were babies. If applied to what you will know will be a bruise, it will not turn black and blue. Of course, application afterward works wonders also. Takes the soreness out of strained muscles and minor cuts. I recommend it to strangers, especially the elders that have thin skin that is bruised and have open sores. Can not say enough good about it.

Does Witch Hazel help with arthritis of the knee?

Norma, You could try it and you might see some impact, but usually it is indicated for skin issues more than joint issues. Let us know what you find out.

I had arthritis in my knees and what totally stopped it was when I quit drinking coffee. I also had it in my hands (and I was a guitar player!) What stopped it in my hands was to give up eating Nightshade Family plants… tomatoes, potatoes, peppers (includes paprika, chilis, red and green , etc.) I REALLY didn’t want to do that! I could live without peppers and eggplants … but didn’t want to live without the deliciousness of tomatoes and potatoes. I went on and off, on and off but in the end??? I decided I wanted my hands more than any particular food. I’ll have a little bit maybe once a month … like a piece of pizza left over from my teenager and her boyfriend. Within 12 hours my knuckles are red, sore and swollen. My ancestry is Irish and although they talk about “Irish Potatoes” , the Irish didn’t have them until colonial explorers brought them back from Peru to Europe. Yes, it’s true … all that lovely pasta sauce the Italians use in their cooking was NOT part of their heritage until the 16th century!

I am wondering, can you add an essential oil to the bottle? I went and bought some of this today, thanks to this article! I have it on almost ALL of my body! After I had 5 kids, I have some vein issues, among other things… lol… But, I noticed the smell is not appealing. Any suggestions?

Renee – I don’t think there would be any harm in that.

The plants can readily be found at nurseries. It is lovely and easy to grow.

The flowers are bright and amazingly like an explosion of confetti that bloom very early spring before the leaves come out. It’s a great deciduous shrub in the Pacific Northwest

It is cool that we are still speaking some words in as Old English. This product works great for ‘roids.

Can does anyone know if you can buy witch – hazel seeds? I’ve never seen this plant in nurseries, I live in Maryland. Guess I need to do some research on how to purchase seeds or a plant.

Great stuff! I love using this on my face and eyes first thing in the morning as an astringent, just splash on and let dry, then apply moisturizer.
Be sure to contain the plant if you are going to plant it in back yard…it can be very invasive and will be kill everything else off.

Thank you for this article. I’ve always wondered what witch hazel could be used for besides an astringent & now I know. I’ll be using it more often now!

Thanks for the artical I amgoing to get a plant at the nursery and plant it in my yard. It sounds like it will be real pretty and I can use it for all my bumps and bruises. [email protected]

What a good artical I am going to find a plant a nursury and plant it in my yard. Sounds like it will be a pretty shrub. I can use the leaves for all my bumps and bruises. thanks for the artical [email protected]

If you're bringing frosted cupcakes to a party or cookout, secure them to the bottom of the platter or tray with a dab of frosting so they won't slide around during transit.
More hints & tips 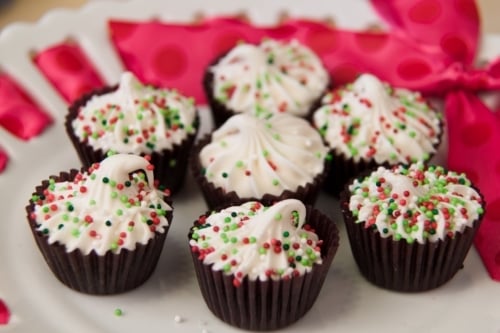