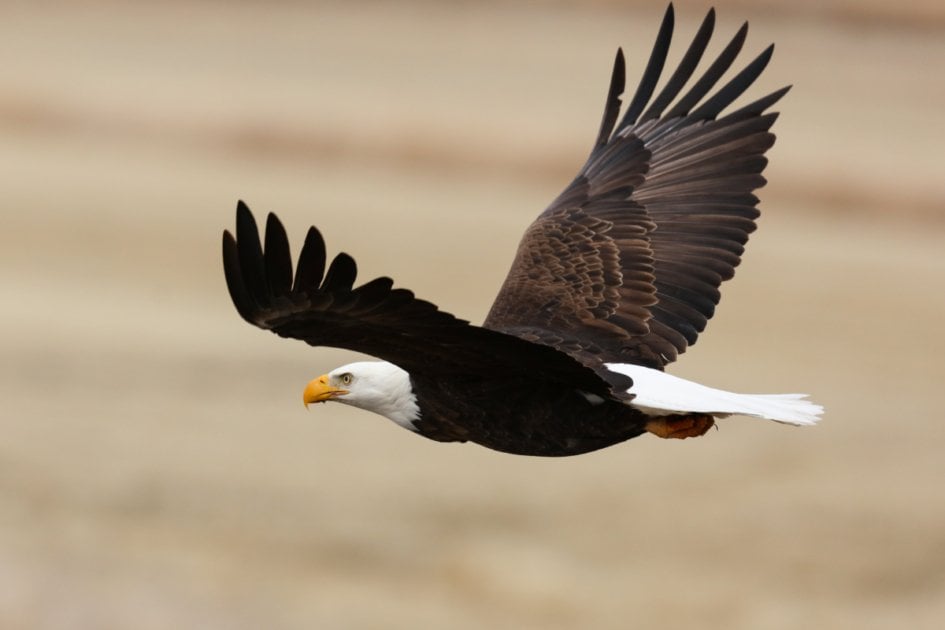 The American eagle, also called the bald eagle, was close to extinction at one time but in 1995, it was removed from the endangered species list. It remained on the threatened species list, however, until 2007. Here are 12 very interesting facts you may not know about these birds of prey:

1) The bald eagle is the US national symbol

The American Eagle appears on the Great Seal of the United States of America. Not only is the bald eagle a symbol of our nation, but it is our national bird and our national animal.

2) They weren’t necessarily in competition with the turkey

Rumors continue to circulate from one century to the next that Benjamin Franklin wanted the wild turkey to be our national emblem instead of the bald eagle. The fact is Mr. Franklin never made his preference public. What he did do is promote the virtues of the turkey in a personal letter to his daughter, in which he wrote, the eagle is “a bird of bad moral character that does not get his living honestly,” because it steals food from the fishing hawk, and is “too lazy to fish for himself.” Mr. Franklin referred to the turkey in his letter as “a much more respectable bird.” He further stated that the turkey was “a bird of courage.” Later, when he was officially asked to propose a national symbol for our seal, he suggested a biblical one depicting Moses, and an account from the Book of Exodus, instead of the eagle or turkey.

3) Bald eagles have a large habitat

Bald eagles can be found in all of the contiguous United States, and in most of Alaska. They also nest and hunt in parts of Canada, and northern Mexico.

4) Bald eagles are not really bald

Although the bird is not bald, the term bald eagle was used historically to describe a white head—it references an old English word, “balde,” meaning white. The adult bird has a white head and tail, and a blackish-brown body. Interesting, young bald eagles do not have white heads or tails, like adults, and look similar to adult Golden Eagles.

The American bald eagle has been sighted in the winter months along rivers, lakes, marshes, and other bodies of water in the interior continental states.

An eagle’s vision is six times sharper than an average human’s. Eagles are able to spot their prey from over a mile away.

Eagles can glide and dive at speeds of over 100 miles per hour.

Eagles weigh up to twelve pounds, and are able to carry objects near their own body weight.

9) Their diet primarily consists of seafood

Ninety percent of an eagle’s diet consists of fish. Although they hunt fish in rivers and streams, they rarely get wet.  When in flight, eagles dip only their feet into the water to catch a fish. Eagles also catch fish by standing still in shallow water and waiting for a fish to swim by.

Eagles have a dramatic mating ritual that takes place in midair. During mating season, a female eagle carries a stick up into the air and drops it in the sky near a male. If the male is interested in the female, he will respond by swooping up the stick, and returning it to her. They may repeat this ritual multiple times. They complete their courtship by flying high in the air, locking their talons together, drawing in their wings, and tumbling interlocked in a free fall towards the ground. Just before hitting the ground, they unlock their talons, spread their wings, and fly back up into the sky.

Eagles make huge nests out of sticks, in the top of tall trees. In fact, their tree nests are the largest of any recorded animal species. These large nests are also heavy. The largest recorded eagle’s nest was discovered in St. Petersburg, Florida. It measured 9.5 feet in diameter and was 20 feet deep. It weighed close to 3 tons.

The female bald eagle typically lays 2 eggs in a clutch. A parent eagle covers its young in the nest with its wings, like an umbrella, to protect it from the hot sun and heavy rainfall. Eaglets practice hopping, then jumping, and flapping their wings in the nest before taking their first flight. The adult eagle flies alongside its eaglet while it is learning to fly. Eaglets begin to fly between their tenth and fifteenth week. When it is time for an eaglet to leave the nest, a parent eagle may place food on a nearby limb to encourage a hesitant eaglet.

Did you know that there are live feeds of eagles that you can watch right now? View the live bald eagle cam here!

they are really good swimmers and divers

Interesting. Thanks. Btw…
#8) Females certainly can weigh more than 12 pounds in the wild, but especially captive ones, who can be much heavier. I believe 10 lbs.a good reference for average female bald eagle weight. Also Northern (AK & Canada) eagles are even larger (cold climate adaptation) than the Southern USA’s eagles. And not so long ago they were considered a species, & with a separate sub-species. Thanks to DNA profiling, in modernity they’re all one big happy family again.
#8) Yes, they can carry nearly their body weight …in extreme circumstances, for very short distances, with no major elevation increase. They are comfortable flyers within loads in the range of 1/2 of their weight.
#9) Diets vary widely per each individual’s circumstance. No doubt, a few do rely 90% or more on fish, but typically (even when nesting near a harbor, large river, or reservoir/lake) their diet is roughly 50% fish. Eagles eat anything that is easily obtained. Eagles set their nest & range base on food availability. No doubt, availability of fish is usually a big factor in this decision. But a diet of 90% fish is unusual.
#11) I takes two to tango! Yes, eagle’s nests are very large, but nest building is hardly a female enterprise. Just like incubating & fledgling chicks …nest building is accomplished thru teamwork. No doubt, females are the heads of household, so-to-speak. Namely with regard to choosing the location & pulling rank with the precise final arrangement of the nest bowl & bedding. But males typically do no shortage of heavy lifting.

We keep a close eye on our chihuahua as well!

Eagles are good swimmers as well.