Strengthening your immunity from within is an important step to stave off illness. When your immune system is strong, healthy and functioning optimally, your body works to fight off illness and disease. And consuming foods that naturally contain probiotics can help.

Probiotics are live, beneficial bacteria present in the digestive (GI) tract. Probiotics are often referred to as “good” or “friendly” bacteria in the gut because it assists the body in proper digestion, detoxification, immune support, energy production, and other important functions.

The word “probiotics” literally means “for life.” The prefix “pro” is derived from the Latin preposition which means “for.” “Biotic” is a Greek word that means “life.”

How Do Probiotics Increase Immune Function?

The digestive tract is one of the largest disease-fighting, immune systems in your body. Beneficial bacteria in the colon enhances the production of disease-fighting white blood cells. In addition, probiotics produce a barrier, like a protective shield preventing harmful bacteria from attaching to and being absorbed by the colon walls. So it’s no wonder that a healthy gastrointestinal tract (digestive system) rich in probiotics greatly impacts our ability to ward off illness.

What Affects the Body’s Ratio of Good-to-Bad Bacteria?

Chronic emotional stress, a poor diet, and environmental toxins such as chlorine in the water, and other chemicals you breathe or ingest, can weaken the immune system, making you susceptible to illness. If you’re taking prescription antibiotics for any infections, it is especially important to reintroduce health-enhancing probiotics back into your system to boost immune function. When you take antibiotics, not only do they kill harmful, illness-causing bacteria, but they also kill off the good bacteria in the GI tract.

Think yogurt is the only probiotic food out there? Think again! There are many foods containing live beneficial bacteria that help balance gut flora and improve immune function. Some may surprise you:

1. Sauerkraut is a favorite German food made by souring grated cabbage and salt. Cabbage is an excellent source of vitamin C. In a Finnish study, research manager, Eeva-Liisa Ryhanen, Ph.D. reported, “We are finding that fermented cabbage could be healthier than raw or cooked cabbage, especially for fighting cancer.” It is sold commercially in jars and can be substituted for coleslaw. Try making your own sauerkraut!

2. Kimchi (also spelled kimchee or gimchi) is a traditional Korean dish that is made by fermenting cabbage, scallions, radishes, and other vegetables and seasonings using the same method as sauerkraut.

3. Apple cider vinegar, unpasteurized, organic with the mother in it is valued as a home remedy and health tonic for its medicinal properties. Incorporate this versatile, probiotic-rich vinegar into your diet daily by adding it to water and drinking it before meals, use in marinade recipes, salad dressings, sauces, ketchup, and to season cooked greens.

4. Kefir is popular in Scandinavian countries, much of Europe, and is gaining attention in the U.S. It is a tart, fermented dairy product containing live, probiotic cultures. It is made by adding milk or a milk substitute to kefir grains. The mixture is then fermented. The end product is a lactose-free beverage. Kefir is thinner than yogurt and is consumed as a beverage, often in smoothies. It is available in grocery stores or you can make your own. Buttermilk is also a great option.

5. Kombucha is a tangy, fizzy fermented beverage, usually made with black tea. A live scoby starter is a necessity when making kombucha. Scoby is an acronym for a Symbiotic Culture of Bacteria and Yeast. It is similar in concept to the “mother” of vinegar and is essential to the fermentation process. Scoby can be ordered online. Kombucha drinks can be purchased where health foods are sold.

6. Miso soup is a staple of Japanese cuisine and is served in popular Japanese restaurants everywhere. The soup is made using miso paste, a probiotic-rich seasoning typically made from fermenting a mixture of soybeans, barley or brown rice and salt with the fungus, koji. Delicious! You can buy it in local supermarkets in the international foods section. If using instant, be sure to add the water to your bowl first, then stir the packets.

7. Tempeh is a traditional Indonesian food that is made from cooked and fermented soybeans formed into a firm patty or cake. Tempeh contains as much protein as beef and is thus favored in vegetarian cuisine around the world. When purchasing soy products, choose organic, non-GMO.

8. Yogurt. Well, of course, we had to include yogurt on the list! Yogurt is made by heating milk, allowing it to cool and then adding in a yogurt culture. Non-dairy milks can also be used. The latest trend in yogurt utilizes dairy-free coconut milk. Bacterial fermentation imparts live, active cultures into the yogurt. Unfortunately, many yogurts contain large amounts of sugar, which cancels out the benefits of the probiotics they may contain. Sugar feeds the harmful bacteria (yeast/Candida) in your gut. For yogurt to be a truly health-enhancing probiotic-rich food, it is best to make your own from raw, unpasteurized milk and sweeten with stevia instead of refined sugar. But if you buy, check labels, and choose low sugar varieties and those containing lactobacillis acidophilus and other live, active strains.

To promote healthy immune function, try to consume cultured or fermented sour foods at least once a day.

I have read that in pasteurized foods the high heat of the process kills those good bacteria associated with probiotics.

That is correct chester11. If you’re not going to make your own, look for items in the fresh part of the market rather than shelf-stable items. However, with foods like tempeh — only a fraction of the fermented soy probiotics are destroyed when cooking.

Make a fertilizer spreader do double duty. Use it in winter to scatter sand on icy walkways.
More hints & tips 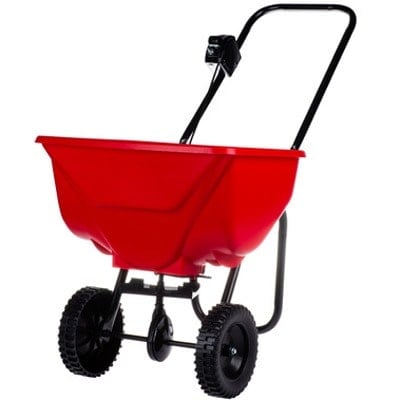