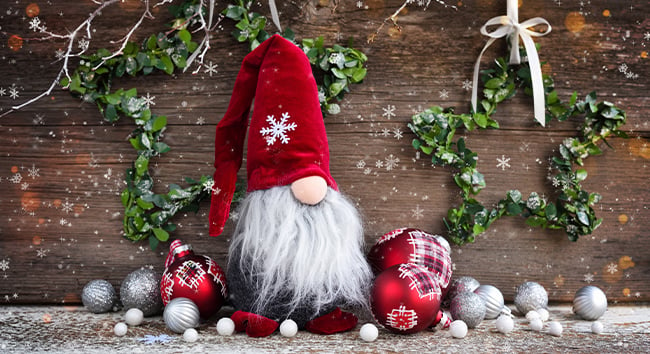 ‘Tis the season for long white beards, reddened noses, pudgy bellies, and red pointed caps. Here come the Christmas gnomes! But where do these quirky characters come from, how have they become associated with Christmas, and what is our fascination with their distinctive look and charm? Is there a connection with garden gnomes? We explain.

Gnomes have a much longer history than many people realize. While it is only in the past few years that gnomes have become holiday fixtures on mantles and centerpieces, these fun figures have been part of many cultures for centuries.

The precise origin of gnomes is shaded in legend and folklore, but various forms of elves, dwarfs, and fairies have been part of mythologies at least since the 1400s in the fjords of Norway, the mountains of Switzerland, and the forests of Germany, all of which are likely origin points for today’s fabled garden or lawn gnomes. In the 1600s, as Europeans expanded their colonization efforts in the Americas, gnomes moved with them, and today we still love these cheerful characters that are typically depicted as short, bearded men wearing outlandishly long, pointy caps.

In different fairy tails and legends, gnomes have long been associated with living underground or moving easily through the earth, often with magical and protective powers to aid nature and make gardens or farms more productive, though some were characterized as more naughty or mischievous. Some legends claim that gnomes are sensitive to sunlight, which will turn them to stone, hence the origin of the garden gnome statuary so popular in lawn and garden decorations today. At night, gnome culture insists the statues come to life to carry out their garden chores, good deeds, or in some cases, naughty tricks.

Sculpted gnomes were first made popular by German artist Philip Griebel, who crafted these unique characters in the mid-1800s. Yet Griebel’s sculptures were not the only early depictions of short, protective figures associated with gardens.

In ancient Rome, small statues of gods were often kept in a garden to offer protection from evil spirits. Especially popular was the figure Priapus, adapted from Greek mythology and the god of fertility and protector of livestock, fruit plants, vineyards, and gardens. Similarly, the Egyptian god Geb was considered to be of short stature, and was god of the earth—though not always depicted in garden statues.

During the Renaissance period, gnomes took on features more associated with grotesques, with petite statures and hunched backs, traits that are still seen in many modern gnome depictions.

Today, garden gnomes may be seen largely as whimsical, decorative figurines, but they can still serve a practical purpose in the garden as life-like figures to deter rodents and other pests. Some gnomes even lend a helping hand by holding a small pot or dish that can become a butterfly waterer, bird feeder, or other accent, or gnomes may be used to mark garden rows, hold plant identifiers, or just add a bit of cheer to any garden patch.

Right now Christmas and holiday gnomes are growing in popularity. Some say this holiday association is due to their resemblance to Santa Claus, as both cherished figures sport a round belly, long white beard, bulbous nose, and red stocking cap. Holiday gnomes can be found in all sorts of seasonal décor, from simple figurines and dolls to candles, ornaments, gift wrap, cards, and more. Even full-blown gnome-inspired Christmas trees have become popular holiday themes, and quirky gnomes are easy subjects for many DIY craft projects for holiday fun for all ages.

But it isn’t just in appearance that holiday gnomes resemble Santa. Both characters have a good-hearted nature and sense of giving, and in some cultures, small elves that greatly resemble today’s depiction of gnomes are believed to help Santa deliver toys on Christmas Eve.

Even the hilariously popular “Elf on a Shelf” has a pointed cap and a gnome-like personality with hidden antics and nighttime mischievous behavior. Though he lacks the trademark beard, he perhaps depicts a younger version of what will one day grow up to become a lovable garden gnome.

Christmas isn’t the only connection that gnomes have to modern popular culture. For nearly a century, gnomes and gnome-like figures have been a charming part of entertainment, starting with Disney’s “Snow White and the Seven Dwarfs” in 1937, and continuing with the introduction of the blue-skinned, strikingly gnome-like “Smurfs” in 1958. Gnomes have been part of popular role-playing games like Dungeons & Dragons and RuneScape, and gnome-like creatures have featured as different types of characters in the immensely popular Harry Potter and Lord of the Rings franchises.

Garden gnomes have also appeared as prominent plot devices and even principle characters in movies like “Amélie” (2001), “Gnomeo & Juliet” (2011), and “Sherlock Gnomes” (2018), and in various advertising campaigns and social pranks. For instance: the traveling gnome gag that involves “gnome-napping” and documenting a wayward gnome’s unauthorized adventures.

While there is a lot of gnome history that remains a quirky mystery, perhaps that is really why we love gnomes so much – they can be the friends and helpers we want, the naughty influences that make us smile, and the jokesters and pranksters that add even more color to all our days.

The Magic Of Christmas — Reinvented Through Storytelling

How To Celebrate St. Nicholas Day

Do you have a Christmas gnome or a garden gnome?

I have been seeing Blue Christmas Gnomes. Does anyone know why the gnomes are blue. As gift givers and holiday spirits does it have anything to do with Hanukkah?

🎄🇸🇯🙏🏻Of course i have Gnomes.. more like Nissan as I’m Viking Norwegian.. my little Grandmother is from Stavanger Norway.. i have her old Christmas Nissen.. my Mom’s & my own hand made one’s painted on Wood Knot’s & Burl’s. 🇸🇯💓💓💕🧝🏻‍♂️🎅

I recently did an article about gnomes for our local newspaper and while researching it I found out that there were persons who were “real live” gnomes. know as “garden sitters” hired by wealthy landowners to literally sit (or stand or walk around) in the gardens on their estates. To have one was a sigh of wealth.ads were placed to find persons (men) who were willing to live in a garden, their shelters could be anything from a hole in the ground, to a cave or, if they were lucky a small stone or wooden hut. The rules they were to abide by were striglent, they must live there seven years, and not bathe, or cut their hair, finger nails or toenails during that time. They were provided with, shelter, such as it might be and food from the landlord’s table with water to drink. Fashion was not problem as most of the owner’s wanted them to look poor and tattered. However, some did wear robes that represented knowledge. Their duties ranched from entertaining guests, with words of wisdom, or reciting poems to serving wine to guests. Others were to remain silent and none were to converse with the servants or leave the estate.
Farmhands and some recluses who might be very intelligent but preferred solitude were drawn to apply for the job, Many may have applied but few remained for the seven years. Most were promised a lump some when their time was up so to leave early many forfeited their pay.
There existence declined and pretty much vanished when wars over took countries and the wealthy lost their fortunes. It was later when the statues began taking over where the live gnomes once reigned and through the years have became the gnomes as we know them. I found n evidence just when the garden sitters became known as gnomes, but it is assumed that the gnomes of today were patterned after the live sitters known for their long beards and their association with gardens. There are likenesses of them on some website and I think there ae still remnants of some of their dwelling in places where they lived.

Fascinating. Thanks for sharing your findings, Sharon!

A discussion concerning the gnomes called “nissa” was not mentioned. They were Scandanavians who lived on farms, took care of the animals, and looked after the families-especially the children. They could be very mischevious if they didn’t get the treats they liked. A good story to read about one of them is The Tomten.

Hi Sue! Thank you so much for sharing your knowledge about gnomes. Comments like yours add to the richness of FA. We appreciate it … and the community here does too! 🧡