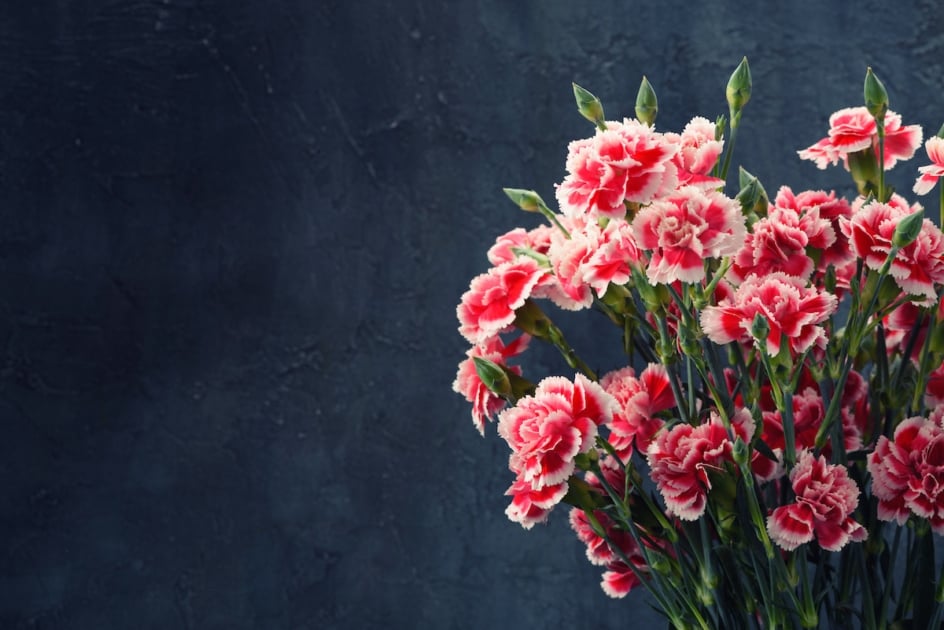 Flowers are fascinating—perhaps more than any other part of the natural world—because of the many layers of meaning people have shrouded them in throughout history. There is a whole sub-category of etiquette surrounding which flowers are appropriate to give—at what times, and to whom. The unending rules surrounding something so simple as a flower can be dizzying. Learn more about flower language.

Another aspect of flower lore concerns the designated flowers for each month of the year. January’s official flower is the carnation.

Carnations are a perennial herb native to the Mediterranean region. A staple of a traditional English garden, they are believed to have been brought to the island by Roman soldiers. Carnations were originally known as corona, the Latin word for crown.

Carnation stems can grow to be at much as 30 inches tall, and the flowers are 2-3 inches wide with a large number of sweet smelling petals. Their natural color is a bright pinkish-purple, but other colors have been cultivated, including red, white, yellow, and green. Their formal name, dianthus, comes from Greek for “heavenly flower.”

Carnations are said to be primarily a symbol of unconditional love, though the meaning can differ depending on the color. In France, carnations are the traditional funeral flower, and are it is considered bad luck to give them for any other occasion.

The leaves of carnations were once mixed with wine to control fevers, while the flowers were believed to be an effective antidote some poisons. The plant was also once popularly used to add flavor to beer and wine.

One legend about the origin of carnations states that the plants sprang up from the tears of the Virgin Mary as she watched Jesus carrying his cross to Calvary. This is probably why pink carnations are, to this day, the symbol of motherly love.

Garnet is the traditional birthstone for January. It is believed to inspire courage, especially during times of trauma.

Known as the “Karma stone” it is thought to bring good luck to those who do kind deeds.

This necklace makes for a wonderful gift for someone who could use some extra strength right now.

What do you think about carnations?

I have loved carnations my entire life from childhood to my now senior years. They are strong, but graceful and have great endurance. I am NEVER without carnations in my home. They give me great joy!

Carnations are simply beautiful, amazing flowers. (How coincidental that I just bought some the other day.) They bring back sweet memories for me. Every Easter my Mom ordered carnation corsages for me, my sister and herself – each choosing her own color. A varigated one (white with red or violet ‘stripes’) was a favorite. And of course Mom always got carnation corsages for Mother’s Day, as did we when we became moms. Carnations just brighten my day and bring a little extra joy and love.

I love the way they smell and they were my mom’s favorite. Her birthday was in January so no wonder! We lost her a few years ago but my stepdad still buys them for her and puts the vase full of them next to her urn.

How can you “throw away” a lovely flower that also smells so sweet-spicy. Any gift of flowers is so wonderful and should be respected and appreciated for the thought that generated the gift I always appreciate any living plant or cut flower bouquet gifted to me….

I love carnations. They last forever and can make a stunning bouquet .

Carnations are my favorite flower! They have a cool, subtle scent that doesn’t bother my allergies.

They have always been a favorite with me. I love the crisp sweet scent.

I absolutely love carnations! I love their spicy fragrance. If I got a bouquet of nothing but carnations as long as they had that heavenly fragrance I would be in 7th heaven!

Carnations and daisy last longer than any other flowers.
They are inexpensive to purchase and will put a smile on someone’s face just the same

IF everyone in America owned a red car, we would be a red carnation.

Love carnations. Buy them for myself quite often. They are cheap, last for weeks, pretty but the main reason I get them is their scent.

I love love carnations! Not only are they beautiful, they’re strong and true! They remind me of true love, you can always count on them, and never leave any doubt as to what you’re getting!

Carnations are beautiful and especially paired with other flowers such as roses. I love the carnation’s fragrance.

I love them ,they are so beautiful.

Slice lemons (or limes) crosswise and place them on a parchment-lined cookie sheet. Freeze, then transfer slices to a resealable bag. Add the frozen slices to your summer drinks to keep them cold without watering them down.
More hints & tips