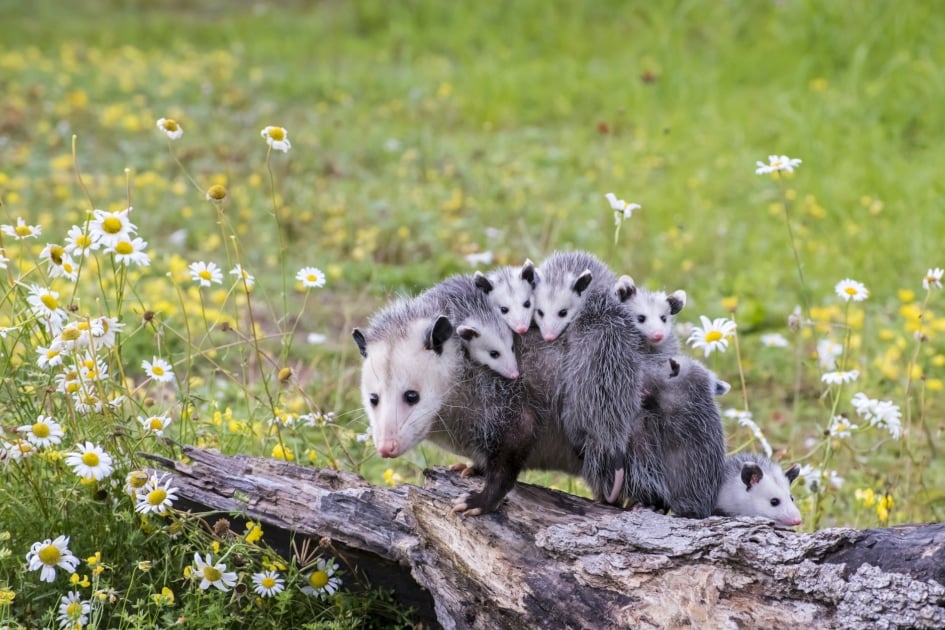 Opossums get a bad rap as garage invaders and “creepy looking” animals that wander up onto our porches at night. They’re not the cutest, in fact, some go as far as calling them ugly. The reality is, opossums are incredibly useful, and typically misunderstood. Here are a few fascinating opossum facts (and yes, the “o” is silent) that will make you think before you shoo them away from your yard!

1. Opossums Kill Ticks by the Thousands

Opossums are voracious eaters that will try anything they find, something you know quite well if you’ve ever found one pawing through your garbage bins. Ticks, particularly the black-legged ticks like deer ticks that are responsible for the spread of Lyme disease, appear to be a top item on the opossum’s menu. Several years ago, biologists from the Cary Institute put opossums and other species, like chipmunks, squirrels, mice, and catbirds to the test, giving each animal 100 ticks to eat. Opossums killed and ate far more ticks than any other animal, leading scientists to estimate that just one opossum eats, on average, 5,000 ticks in a single season. See some of our tick remedies here!

2. The Only Known North American Marsupial

Outside of Mexico, the Virginia opossum is the only known marsupial to make its home in North America – although there are several other species of opossum that can be found in other parts of the world. Marsupials are a fairly small class of animals that raise their young in a pouch, and include kangaroos, wombats, koalas, and opossum.

If you’ve ever watched an opossum at play, it might have struck you as a somewhat clumsy little critter. However, opossums are world-class tree climbers, with sharp claws, opposable thumbs on their hind feet, and a prehensile tail that helps them scale trunks and hang onto branches. In fact, opossums love trees so much that they often nest in tree hollows.

Opossums aren’t indestructible, but they do have some pretty hefty natural immunities. These animals are largely immune to rabies, although it can occur rarely. They’re also largely immune to venom from snakes like cottonmouths and rattlesnakes.

You’ve probably never heard an opossum make a noise before because they are usually fairly quiet. However, they do have a few distinctive calls. Young opossums will make sneezing sounds or a soft “choo choo” to call out to their mother, who will respond with clicking noises. Males make those same clicking sounds during mating season. And when an opossum is threatened, it may hiss or growl.

7. Baby Opossums Are Cute — And a Little Weird!

Baby opossums are called joeys, just like baby kangaroos, and when they are born, they are only about the size of a honeybee. The infant opossums crawl to their mother’s pouch, where they will stay for 2—3 three months. Baby opossums stay with mom for about 100 days and, as they age, they’ll start venturing out of the pouch more and more. But instead of wandering around on their own, they’ll often hitch a ride, clinging to their mother’s back as she scavenges (see video below).

Take a look at this fascinating video of a mother opossum carting her babies on her back!

Opossums are so often misunderstood but they are great creatures to have around. They’re docile, unlikely to threaten pets or carry disease, and they help keep pest populations under control. Instead of shooing them away, let them hang around and they’ll clean up ticks, venomous snakes, discarded birdseed, and more. Among all the wildlife visitor to your back yard, opossums are one of the best to have around.

We closed our garage door late one night and the next morning I found a juvenile opossum curled up sleeping on the top of vegetative refuse in a five gallon bucket. It woke up and ‘grinned’ at me. Checked throughout the day and it slept just like a cat with it’s head upside down. I used to think they were ugly but seeing one up close changed that. What a little sweetheart. We waited until dusk before trying to move the bucket with a push broom. It jumped out and ran to the great outdoors. I left it a kitty crunchie pile for a snack, gone the next morning. We close the garage door before dusk now.

Would a possum eat a pineapple?

I love possums my neighbor doesn’t like wild life. She had a trapper come get two Connie’s and a possum that’s been around couple years, I’m sure it was about three. Do they dig up yards? I’ve raised a few and never had them do that. Thank you. My neighbor and I don’t see eye to eye.

Good for you. they’er one of the best and lest harmful beasties around. Pet more Opossums. No they do’t dig but armadillos do.

I found an orphaned baby opossum today. Thanks all full so now I have a little one to rehab. If you have any advice I’d be grateful. He’s about 6 inches long. Not eating yet. But drinking from syringe and very scared! Just released a baby squirrel I rehabbed for months so I’m hopeful for this adorable little critter.

Should say “Rehabs” are all full now!

These creatures do NOT need your help! Live and let die. Other animals are needing their carcasses to live. Circle of life, Simba.

Jenn, we appreciate your big heart, butyou really should call your local wildlife official rather than trying to care for them yourself. They will bring them to facilities where they can get the proper help and rehabilitation they need.

Not likely too many will just but any young down

If a cat can eat it an Opossum can. Goats milk is good. They are very cat like in habits. Also when grown the best house predator one can have. Better than a cat for mice, rats and other like squirrels. No the house wiring does not appeal to them.

I love opossums,but do they have fleas?

Does opossums carry fleas.I love opossums they are cute

According to most websites, they do carry fleas as do all wild animals.

I have been putting food scraps out and happily the other night on my way to work the night shift I met the possum who has been taking advantage of my offer. It was love at first sight. I love possums, and live at the edge of a forest. I am thrilled to have them around my yard.

Thanks for sharing, Susan. They are fascinating creatures!

No, it’s rather normal in my area. They are nocturnal, yes, but I’ve noticed when any of them have babies whether visible or not it seems more common. I’m not sure if they are all moms, but everywhere I’ve lived there’s always been the daytime opportunists but none of then have been sick.

We have a small horse rescue and enjoy feeding a colony of TnR cats. Opossums dine with the cats and keep the tick population on the farm to nil. What wonderful animals.

We agree! Thank you for running the rescue and helping animals!

These are trash opossum facts make some true ones not fascinating

Hmmm… Noah. We can’t make up facts, sorry you didn’t like the real ones!

I have had opposums around for the whole 30 years I have lived at my house. Mostly they roll up when you go near them and don’t move. I had an older one in my garage where I feed some cats and he got run over. Last night I found 2 more in the garage – one older and one younger. They are cuter when they are young. The older they get the less hair they seem to have and they just aren’t cute. Cats pay no attention to them. I was afraid they were taking the cat food away from the cats but no the cats just keep eating.

In yard, looked to be at least 10 dead baby opossum. A couple had faces and white hair about 2-3 inches long. I had a appt so when I got home about 2 hours later, I checked and there appear to be at least 20 and they are all now decaying, including the ones that were developed. I’m distraught I feel so bad.

Hi Roseann, Oh no! I wonder what happened? We recommend that you call your local animal control to report the incident.

Since they eat carrion sounds like carcass poisoning. Ranchers and others do this frequently to
rid an area herd predators.

I’ve rescued possums about 6 years ago, their momma was attacked by a coyote. I feed possums at my property, even was able to pet and bring one in for a spell and then tragically today, one was dead on the road, went to see if it was one I fed and saw something move, one of her babies, eyes still not open, all the others were dead.

Darling video.
Had one in our backyard here in Nags Head, NC.
Previously, where we lived in Va Bch, VA….. also had one in backyard. All were near birdfeeders.
Now I know that birdseed is something they will eat up off the ground…. Great picker upper!
Thanks for sharing this video.

And they ain’t bad eating.

Eating low on the hog

I have housed an opposum since before her eyes were open. My cat brought her in as a present one evening and I didn’t have the heart to put her back out into the yard, not knowing what happened to her mother. She is almost 3 months old now and is an absolute sweetheart.

Since you brought it up and furnished so many helpful facts, I must sgree (especially after today’s scathing post on our bulletin board) I would rather invite a whole slew of possums into my home than the frizzy hair grey predictor roaming the streets and alleys in and surrounding my beloved neighborhood. Yep, she pointed her long fangy finger at me today. Hurry home ’cause I get into trouble when you are assuming.

Love the video and thank you for the education! I have a few ‘possums that keep my yard very tidy and I never need to worry about old leftovers. I a sure my neighbors are not too enthusiastic about them but my cats don’t mind them and they cause me no trouble. Thanks again for the education!

You’re welcome, Maggie! We are glad you enjoyed the story.

I love opossums and think they are adorable. I’ve had a momma opossum with her babies under my porch for the last 3 years. I love watching them eat, them groom themselves. Would love to be able to actually pet or hold them. But I leave them be. 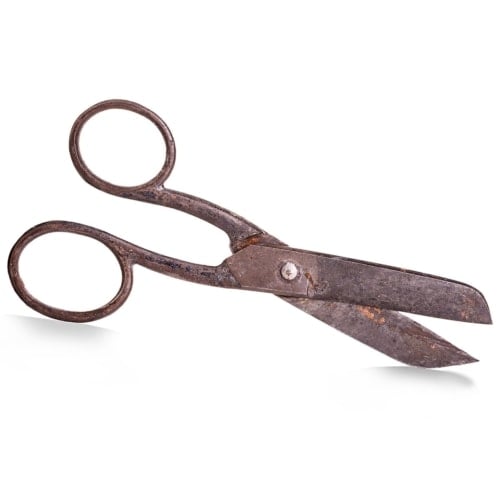