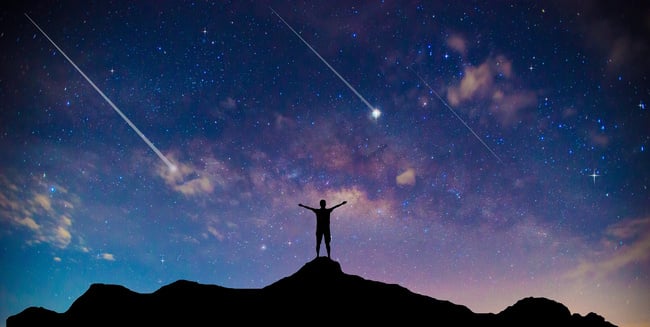 Have you ever wondered why wishing on a shooting star is believed to be good luck? Learn more about shooting star superstitions and what makes them so special. Read on.

What Is a Shooting Star?

Shooting stars are a delight to see streaking through the night sky, and while these fleeting dashes of light only last for a moment or two, they can leave a lasting impression on those who see them.

A shooting or falling star isn’t a star at all. It is a meteor—a chunk of asteroid, cometary debris, or space dust that burns up due to friction with the earth’s atmosphere. Millions of meteors skim the earth’s atmosphere every day, but the vast majority are not visible because they are too small, the sky is too bright, or they are otherwise obscured by clouds, fog, or obstacles.

Prior to the 1800s, shooting stars were considered atmospheric phenomena, similar to lightning, rather than originating from the cosmos. In fact, the word meteor originates from the ancient Greek ta meteōra and medieval Latin meteorum, both of which refer to “high up” and in the sky.

In the early to mid-1800s, greater astronomical research clarified the origin of meteors as being beyond the earth’s atmosphere. Meteors may originate from different directions and sources, including cometary bodies, asteroid belts, or ejecta from impacts with the moon.

Wishing on a Shooting Star

With many people of all cultures looking to the heavens for signs, symbols, and answers for eons, it is no surprise that shooting star superstitions exist. The most prevalent superstition is that it is good luck to wish upon a star.

While some interpretations of wishing on a star can indicate any point of celestial light as the appropriate focus for a wish, a shooting star has special significance because of its rarity. The idea of wishing upon one has been around for centuries.

In the second century, the Greek astronomer Ptolemy hypothesized that they were a result of the gods peering down from heaven, having parted the heavens to do so and therefore dislodging a star in the process. Because a shooting star was a tangible symbol of the gods looking down at that moment, it was believed that a wish or request made upon seeing the star was more likely to be heard and granted.

In the 1830s, the idea of wishing upon stars became even more prominent in modern beliefs. Seeing a meteor was believed to be a sign of promise, luck, and good fortune, though of course individual wishes varied greatly. Whispering “money” three times while the star remained visible was believed to be the best way to ensure financial success with such a wish.

Wishes aren’t the only superstitions associated with shooting stars. Many cultures associate the stars with controlling destiny, often linked to the afterlife.

In the sixth century, the Chinese philosopher Confucius interpreted shooting stars as being a manifestation of departed souls moving beyond. That journey to heaven – or the reverse, with a recently passed soul falling to the underworld – has been echoed in many cultures, including in Mongolia, Ireland, the British Isles, ancient Greece, and New Zealand.

In some beliefs, a shooting star is believed to be a new soul returning to earth to be reborn.

For sailors, they are more practical omens. When seen at sea, the direction the star travels is believed to predict the direction of the winds, which can be useful (if not scientifically valid) for navigation.

Not all shooting star superstitions are pleasant or practical, however. In Eastern Europe and Mexico, shooting stars are often seen as evil spirits, bringing bad fortune to those below. This can be especially true if the star is brighter, stronger, and impacts the earth as a meteorite.

Ultimately, they are almost universally seen as precursors of change, whether good or bad.

How to Catch a Shooting Star

One reason why shooting stars are so associated with different superstitions is because they can be rare and difficult to see. This is especially true in our modern era, when light pollution often obscures all but the brightest and longest-lasting meteors.

To better your chances of seeing a shooting star, choose a dark location free of excess lighting that can make it harder to see these fleeting streaks of light. This includes viewing during the new moon or after the moon has set. Clouds and fog must be minimal, however, or else your view will be obstructed.

Facing east – the direction of the earth’s rotation – will position you to see shooting stars earlier in their transit, before they flame out. If you are viewing during an annual meteor shower, however, face the constellation where the meteors are known to originate in order to see them more quickly.

Watching for shooting stars closer to dawn will be most effective, when your eyes are most adjusted to the darkness and more meteors will be visible. It can take about 30 minutes for your eyes to adapt to the dark, so time your viewing accordingly.

To stay comfortable and prolong the viewing, have a light jacket or blanket available, as it can get chilly at night, even during the summer. A reclining chair or lounge chair will also help you keep your neck angled to the heavens without developing a crick.

To improve your chances of seeing the most shooting stars, check out these regular and superbly stellar annual meteor showers:

Have you ever wished upon a star?

Did your wish come true?

If you are interested in stars, be sure to read our monthly Night Sky Guide. (Bookmark the page for easy reference.)

Interesting article and topical too. (UK).

Thank you, Rosemary. We appreciate your feedback!