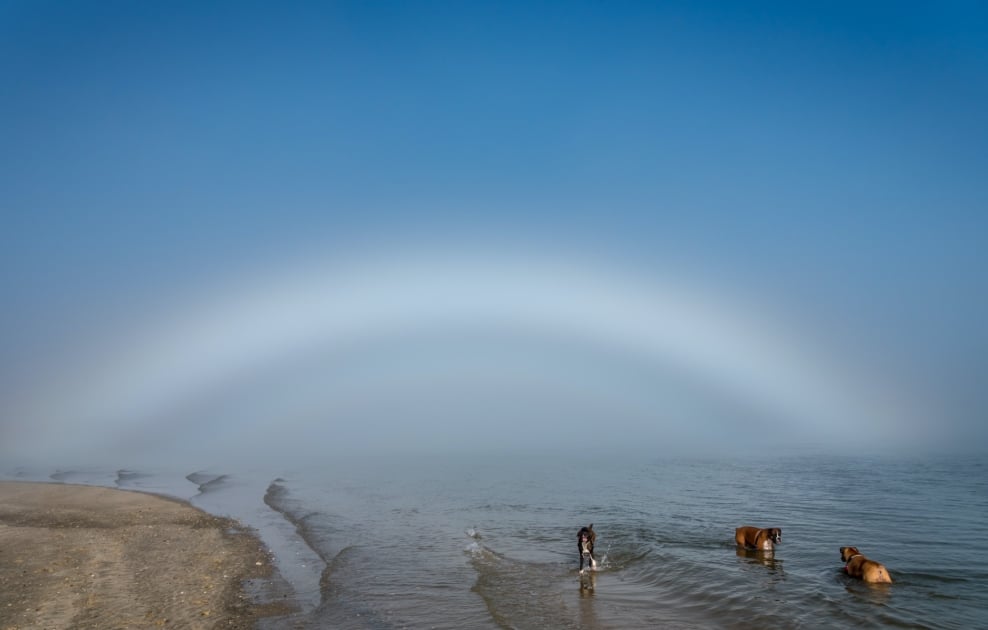 Wherever the Sun meets water, magical things happen. When sunlight shines through the pouring rain, you’re likely to see a rainbow. The same is true for fog—when conditions are right, sunlight mixing with fog can cause a beautiful natural phenomena known as “fogbows.”

Unlike rainbows, fogbows normally appear as a band of bright white, sometimes with hints of red or blue. Because of these differences, fogbows are often referred to by other names like cloud bows, white rainbows, or ghost rainbows. How do they form, and where can you see one?

Like rainbows, the two primary ingredients for a fogbow are sunlight and water droplets. For a fogbow to form, the Sun needs to be at a low angle to the existing fog in the atmosphere—about 30 to 40 degrees high. This is the reason why fogbows are most commonly spotted in the mornings and evenings, or from high vantages that place the viewer above the fog, like on a mountainside, seaside cliff, or even from an airplane.

How Can You See A Fogbow?

Your best chances of catching a fogbow are when the Sun is shining brightly and the fog is thin—they’ll appear as the Sun breaks through the fog behind you. You’ll often find fogbows as the cool sea mists roll in over the ocean or as fog makes its way down a hillside or mountainside. And, if you happen to be in the middle of a fog or a cloud – say, in an airplane – you might see a full circle rather than an arch.

Why Aren’t Fogbows As Colorful As Rainbows?

Most fogbows form an arch that is every bit as tall and wide as a rainbow, but the similarities end there. Fogbows don’t show as many colors as rainbows do because the water droplets that make up the fog are much smaller than raindrops – light enters the droplets the same way as it does raindrops, but the smaller droplets don’t reflect as much light, which is why you’ll only see a little bit of color, if any at all. In fact, you can tell how “wet” a fog is based on the colors you see. If it’s white, the mists are very fine, but if you see a little bit of blue and red, the fog is made of larger droplets.

Other Phenomena That Occur With Fog Bows

Fogbows, solar glories, and Brocken spectres are all rare and beautiful occurrences. If you keep an eye out the next time fog rolls in, there’s a good chance you’ll get see a fog bow. If you’re really lucky, you might spot a solar glory or a Brocken spectre, too!

I’ve been looking for a fog bow for years, and, finally, my son and I spotted one this morning in our beautiful state of Oregon! So cool to see something new in nature! What fun it is to find other folks who are enjoying Mom Nature at her finest! We think a Sun Dog staying with us on a cross country trip to our Son’s home for Thanksgiving–was a guidance and blessing from my Dad–sent from Heaven! He got us there! Now we’ll all be searching for a moon-bow! thanks for the eye opener.

Hi Joey Kubesch – thanks for writing and sharing that info!

It is always so cool to learn about new things, and so I will most definitely be keeping my eyes open for all of these. Thank you!

I captured a picture of one of these at Meeks Bay on Lake Tahoe where my shadow is – arms spread – In the center. I had never seen one before. Within the next few months, I saw 2 more.

What are SUN DOGS ❓

I saw one only one time, and that was in October 2006 north of Houston, Texas. When I first saw it, it was way way in the distance, and I could see the whole thing. And when I drove away (I was visiting a cemetery), I literally drove ‘under’ a fog bow 3x’s! I could see the end of it close up to my left, and then it went way way to my right, probably miles away. It appeared and disappeared 3x’s on this road along the cemetery. I didn’t even know that you could drive under a bow??? This is a true story, and I took it as a sign from God! 🙂 Thanks for sharing this article ~ God bless!

I read about this in my email yesterday and I saw one today walking my dogs!!! The moon was behind it. What a spectacular sight.

I call these mornings with the unusual colors Rembrant mornings because they remind me of the old master’s paintings.

That’s really interesting! I’ve never heard of fogbows… may have seen them at the lake in early morning when there was fog and sun coming up too, but never related it to a …bow.

I saw one this morning. It was a vertical line, not a bow formation. One of the most beautiful things I have ever seen.

Thank you, everyone! I’m glad you all enjoyed it!

This was so interesting. Thank you!

Thankyou for this info. I really enjoyed.

Weather and science, lore and a bit of mystery with photos to hammer the thing home. Thanks for another great one, Amber!

No herb garden is complete without fragrant, medicinal mint, but it can be invasive. Prevent it from overrunning your garden by planting it in barrels or other decorative containers.
More hints & tips 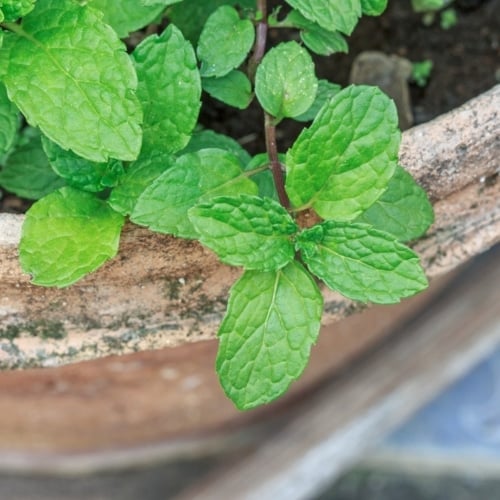