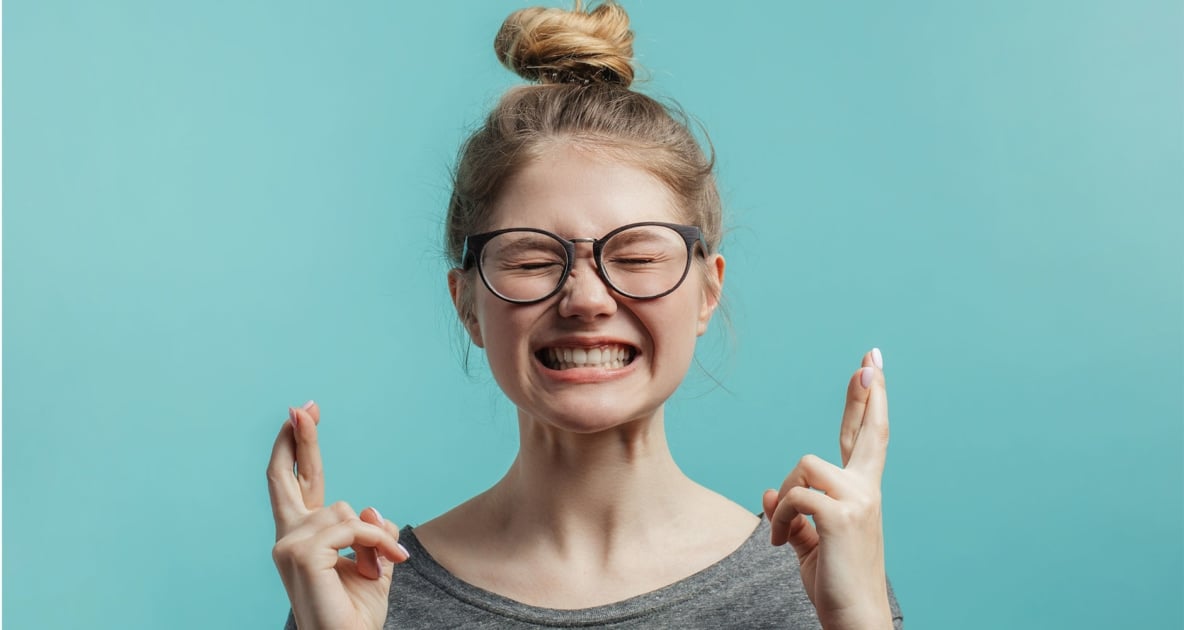 The granddad of all superstitions, Friday the 13th is perceived as an abnormally ominous day. Many feel that there are numerous incidents and examples in history when a calamity befell someone foolhardy enough to challenge the number 13. The ancient Hindus, as the story goes, started the whole thing when they avowed that 13 people at a table brought bad luck. Some trace the phobia to the fact that Christ died on a Friday, and that there were 13 at the Last Supper, one of whom betrayed Jesus.

Whatever you believe, this Friday the 13th, you may just want to do one of these things to keep bad luck from finding you!

13 Ways to Improve Your Luck On Friday the 13th

Making the sign of the Christian faith with your fingers is believed to prevent evil spirits from ruining your good fortune.

It was once believed that good spirits lived in trees and that by knocking on anything made from wood, we can call upon these spirits for protection against misfortune.

Ancient druids believed shamrocks helped them to see evil spirits, providing the opportunity to avoid them.

4. Wear your clothes inside out

No one seems to know how this superstition originated, but the belief that backward or inside out clothing brings good luck continues to be widespread — from children wearing their pajamas inside out in hopes of a snow day to baseball players and fans turning their caps inside out during important games, and more.

5. Look at the new Moon over your right shoulder

The Moon is central to many long-held superstitions, and the new Moon is seen as a ripe time for undertaking new enterprises. Whether those enterprises are successful or not depends on whether the New Moon is first seen over the right shoulder (good) or the left (bad). While we’re having a full Moon near the 13th this month, here’s our Moon phase calendar so you know when the new Moon is!

The belief that sleeping with your head facing south promotes good health and fortune persists to this day, even among some doctors. The belief seems to be rooted in the Chinese art of feng shui, which attributes a causal connection between geographic placements and the movement of “qi,” or positive spiritual energy.

While breaking a mirror is believed to usher in seven years of bad luck, the breaking of clear glass has traditionally been seen as a sign that you’ve averted some grave misfortune. The glass purportedly takes on the ill fortune in your place.

Anyone who’s ever been caught without his/her umbrella may dispute this one, but rain has always been a sign of good luck. This is probably because it is so important to the success of crops; before modern irrigation methods were widespread, a rainy season meant the difference between lean years and prosperous ones.

This is another superstition with uncertain origins. Luckily, few people iron their sheets these days, anyway.

10. Avoid cracks in the sidewalk

Most of us know the old rhyme “Step on a crack, break your mother’s back.” Whether the rhyme is the cause of or a result of this superstition is uncertain, though belief in it persists in many people today, even if subconsciously. Come to think of it, avoiding sidewalk cracks is probably a good policy for anyone who wants to avoid tripping.

11. Carry an acorn in your pocket

Acorns, the fruit of the sturdy oak tree, are an ancient symbol of fertility and long life.

The number three has been seen as a lucky number in many cultures and religions throughout history. In Europe, where this superstition originated, the number’s association with the Christian trinity is an important association.

Finding, and claiming, any of these items have long been believed to portend good fortune. Some modern versions specify that only a heads-up penny is good luck.

Find a penny
pick it up
and all the day
you’ll have good luck.

Animals have long been seen as harbingers of either good or bad luck. Here are just a few animals that are said to foretell good fortune:

4. A robin flying into your home, on you

5. Dolphins swimming near a ship

6. A frog inside your home

7. A spider spinning in the morning

8. A dog (especially a Dalmatian or a greyhound with a white spot on its head)

9. A bee landing on your hand or head

1o. Birds calling from any direction but north

11. A bird leaving droppings on your head (yuck! Who wants that kind of good luck?)

13. A butterfly inside your house

19. A stork building a nest on your roof

Thank you for not talking about bad luck animals

I and my friends walked through rain today

What about the lucky number 7? Anybody?? Ive never had luck with it.

The ‘bad luck’ of Friday the 13th can also be traced back to the early 1300’s when the Knights Templar were rounded up and arrested on Friday Oct 13th.

…was lost Friday 13th July, 2000, Florence, Italy…my travel group left me in the Catholic Church in Plaza…I had told our group leader, Dr. Roberts of S Carolina Baptist Courier to watch me…they did not count heads for first time in over a week before leaving the tour of the church…I did the Catholic ritual (I’m Baptist) in the church, Holy Water & crossing of heart…an Angel after 2 hours appeared , got me back with my group…know now she & her companion (male) were angels…although they looked normal! Why would she volunteer to help me out of all the thousands walking around…especially after I asked a police man & he only laughed.

Actually the reason for wearing clothing backward is to confuse the grim reaper who is not only the harbinger of death but also brings bad luck. He follows you so if your clothes are on backward it makes him think that you are walking toward him so he goes around you to get behind you and instead gets in front of you. He gets confused and gives up taking his bad tidings with him.

I was foretold a Sparrow in the house meant pending death. What about the superstition of walking under a ladder and a black cat crossing your path? Happy Friday the 13th.

since I have allergies I always sneeze before breakfast. My grandma had one about seeing a red hair lady and white horses don’t know where that came from

I always heard that if a bird gets into your house there will be a death in the family. It’s happened to me 3 times.

You have a full moon/strawberry moon for your special day. Not another full moon on Friday the 13th until the year 2049 so enjoy.

Lot’s of superstition there but I enjoyed reading them..:) Sometimes I do silly stuff like if you pick up a penny and if it’s heads..keep it..if it is tails…give it away…never return salt if you borrow some. Come back in the same door you went out of…when passing salt at the table…set it down first…ok..I’ll stop…happy Friday folks..:)

I’ve never heard the one about the acorn, but always heard it was good luck to carry a Buckeye in your pocket.

I never was bothered by this date before, until 3 years ago my husband was diagosed with cancer, we got the news on friday the 13, God willing he is still with me, and a while back he gave me a four leaf clover, now I never fail to have this with me on this date!

Buy soap bars on sale in quantity and store them unwrapped in your linen closet. They will harden and last longer.
More hints & tips