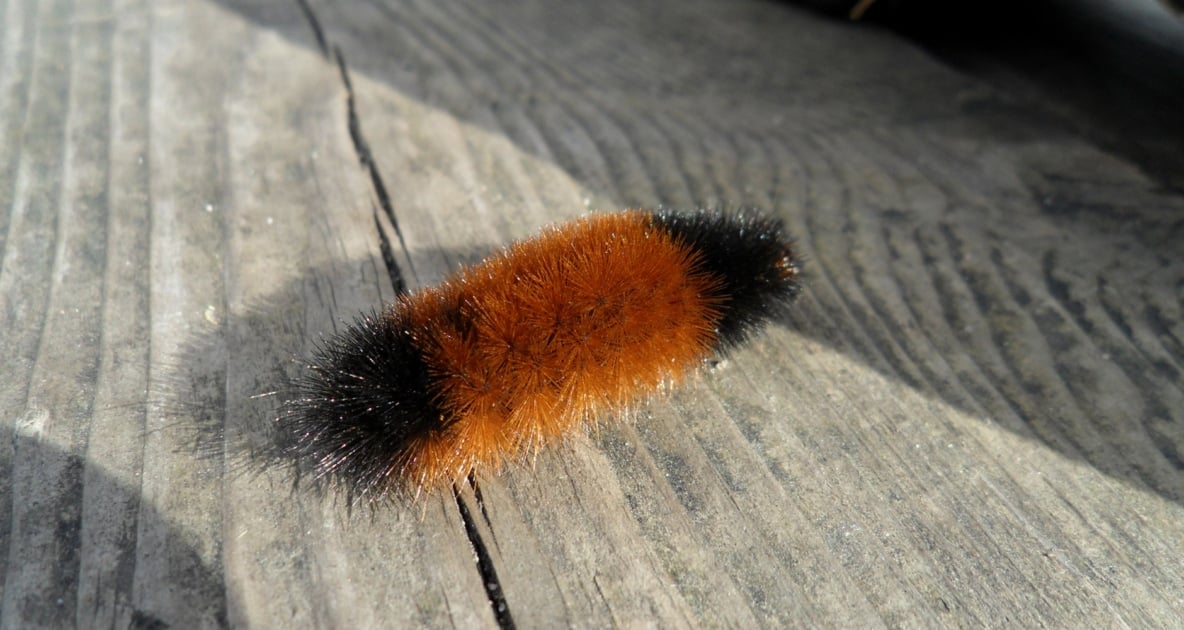 The banded woolly bear, also known as the woolly worm caterpillar, is one of the “signs of nature” to watch to foretell the winter weather to come (he’s #18 on our list of  20 signs of a hard winter). According to folklore, if the caterpillar’s orange band is narrow, the winter will be snowy; conversely, a wide band means a mild winter. And fuzzier-than-normal woolly bear caterpillars are said to mean that winter will be very cold.

How did these caterpillars become a winter weather forecaster? And what else do we know about them? While we only pay attention to them at one stage of their lifecycle, there’s much more to these furry weather prognosticators than meets the eye. Check out these interesting tidbits:

Why Do Woolly Bear Caterpillars Appear in the Late Summer and Fall?

As a caterpillar, the woolly bear is technically larva, which is the first stage of life for a moth or butterfly after it lays eggs. The eggs hatch in the fall, which is why woolly bear caterpillars are such a common sighting during this season. Though they are most common in the fall, early hatchlings can also be spotted during the summer months, too.

What Does A Woolly Bear Caterpillar Become?

Woolly bear caterpillars turn into the Isabella tiger moth (Pyrrharctia Isabella). You can recognize these moths by their yellowy-orange coloration, black legs, and small black spots on wings and thorax.

Woolly bear caterpillars are known as generalist feeders, which means they will eat a wide variety of nature’s goodies, but they tend to favor leaves. Throughout the summer and fall months, they will feast on a wide variety of greenery from native plants —particularly herbs like dandelion, plantain, and nettle—but also tree leaves and other foliage.

While in caterpillar form, woolly bears tend to be nocturnal, eating at night and sleeping during the daytime, generally under fallen leaves or in other hidden spots. Of course, this isn’t always true, which is why we see these fuzzy caterpillars quite often meandering slowly about during the day.

As the weather turns colder, the woolly bear caterpillar goes into hibernation, choosing a sheltered spot in a fallen log, under a stone, or another good winter hiding place. Interestingly, these caterpillars might just be nature’s ultimate survivor—woolly bears produce a kind of antifreeze that protects their organs and other soft tissues while the rest of the caterpillar freezes solid over the winter. Because of this, they can survive temperatures as low as -90 degrees Fahrenheit!

When temperatures approach 50 degrees during the daytime in the spring, the woolly bear caterpillar thaws and starts moving around again, gorging itself on springtime greens like dandelions. As soon as they’ve eaten enough, they will spin a fuzzy cocoon — using their own fur, no less — and begin the transformation into their adult stage. Once a woolly bear has made its cocoon, which it will normally attach to grass or a twig, it will stay inside for somewhere between 10 to 15 days before emerging as an adult Isabella tiger moth.

So How Did Caterpillars Became Associated With Weather Forecasting?

How did the woolly bear caterpillar become a winter weather forecaster? These caterpillars and their ability to predict winter weather have been part of American folklore since the colonial era but were popularized by entomologist Dr. Howard C. Curran, curator of insects at the American Museum of Natural History in New York City, when he decided to put it to the test. In 1948, Curran headed to Bear Mountain, New York, to study the caterpillars and found that over half of his test subjects had wide orange bands, meaning the upcoming winter would be milder-than-average. And it was. He relayed his findings to a reporter and the story was published in the New York Herald Tribune.

Dr. Curran continued his study for eight more years but was never able to fully conclude whether the woolly bear was a reliable prognosticator. But the folklore continues to this day.

Are All Black Caterpillars Woolly Worms?

Caterpillars that are all black, all brown, or another color are a different species, not Pyrrharctia Isabella—so don’t think it means that winter will be brutal if you spot one!

Even though not everyone subscribes to the woolly bear method of weather forecasting, watching them in the fall is an exciting American tradition that is unlikely to change anytime soon. In fact, there’s even a famous Woollybear Festival held annually in Vermilion, Ohio that celebrates the caterpillar’s abilities.

We don’t use the woolly bear caterpillar or any other bits of folklore to make our predictions (here’s how we do it) and we just released our winter 2020-21 winter outlook. Here’s what we’re forecasting!

I took pics of a beautiful all white one! I guess it’s a different species, but it looks exactly the same except for the white fur

I saw the all-black variant today outside, and he was big enough.

The moth shown above is not a tiger moth.

Ive seen these caterpillars but with rows of black dots in the orange band. Does that mean something?

This wooly bear month I found

Hi, I just walked to the forest preserve this afternoon and found this cute wooly bear Month. Don’t know what should I do. I bring him home put jn the shoes clear bin and put some leaves and put dump wet paper towel. I leave in Illinois today whether here 67F

apple is my caterpillar

My caterpillar has been in his cocoon for 2 weeks now. IS he okay?? I can kind of see him inside the cocoon, but he is not fuzzy. Idk if he is dead or not :/ Can someone tell me? how long did yours stay inside a cocoon?

Susan Higgins
Reply to  apple is my caterpillar

Hi apple is my caterpillar, without seeing it firsthand, we have no way of knowing. Are you keeping it in your home?

My caterpillar had a WIDE Orange band and short velvet looking fur not long and fuzzy. So I guess this means a mild winter, not a lot of snow, cold and days when the roads will tend to get slippery when it has been sunny during the day and then when evening approaches the temperature will drop thus producing tricky roads for driving.

I saw one of these cute l’il guys while biking the other day. It looked agitated on the hot pavement. When I came back through (less than 10 mins later), it was barely moving. I tried to get him to crawl onto a small leaf, but I was too late. I knew I should’ve stopped the first time. 🙁

That’s too bad. But you will know next time and so will I.

I love these guys. very cute, very fuzzy. If I was the size of a caterpillar I would hug them. I wish that I could make a tv show where there are tiny caterpillars that wear suits and they tell me the forecast.

My caterpillar has been in its cacoon for 4 weeks soon to be 5 weeks, its growing but I don’t know what to do. Can anyone help?

So what happened? Ours just made a cocoon.

Found a Woollybear on my kitchen floor next to the heat register. I put it on my potted basil plant. After reading this, we’ll take it outside and find a good spot to shelter and hibernate for winter!

Hi Jane! That’s very kind of you! What did his orange and black bands look like — are you in for a mild or cold winter?

Creation never fails to amaze me . The complexity of even the lower creatures is mind blowing . Brings a new humility to me to see intelligence displayed in such glory . Beautiful ! Great research Amber !

Nature is absolutely amazing. Why do some people find it hard to believe in a God who created it all?

I love reading facts & other beliefs about insects/animals/etc of their early knowledge about the weather..

So, if a Woolly Bear has more black than brown, does that mean that the resulting adult moth will have more black on it’s wings and body?

What is he using to make that cocoon?

Hi Judy, in the story we mention that “they will spin a fuzzy cocoon — using their own fur, no less — and begin the transformation into their adult stage.” Fascinating, isn’t it?

There is also a woolly worm festival in Beattyville, Ky. every year.

Fun! Have you ever attended?